Gusts of wind from the south could put the kibosh on the New Year’s Eve fireworks show scheduled for midnight Tuesday at Seattle Center.

Event organizers are holding out hope that the show will go on as scheduled, but they will monitor conditions with the Seattle Fire Department’s fire marshal. The decision about whether to postpone will be made in the half-hour before the show, said Seattle Center spokeswoman Deborah Daoust. If it is postponed, it would occur at either 2 a.m. or 7 p.m. Wednesday, she said.

The weather system hitting the Puget Sound region is forecast to continue to bring showers into the night, along with heavy wind, according to the National Weather Service in Seattle. Winds are expected to be 25 to 35 miles per hour with gusts up to 40 to 45 mph this evening, likely through early Wednesday morning. While areas north of Seattle will experience more wind, the weather service expects the Seattle Center to also get hit with gusty conditions.

In addition to putting the midnight fireworks show in jeopardy, King County Metro said high winds could affect service. Metro, which is offering free rides from 7 p.m. Tuesday to 4 a.m. Wednesday, advised riders to check for delays on their routes.

As of 6 p.m., the Seattle Fire Department said it was not planning to cancel the fireworks permit. But if the forecast holds up, the fireworks may have to be postponed. Seattle Fire spokeswoman Kristin Tinsley said officials, along with pyrotechnicians, will be watching a weather monitor on the Space Needle to see if sustained winds right before the show exceed 25 mph or if gusts exceed 35 mph.

Daoust said event organizers are hoping wind conditions will be less extreme at the Space Needle, as the weather service’s forecasts are more regionally focused.

If the fireworks show is postponed, the decision will be shared on the Seattle Center’s website and social media. Guests can still enjoy hourly light shows at the Space Needle, which begin at 7 p.m., as well as other free events at Seattle Center, Daoust said. 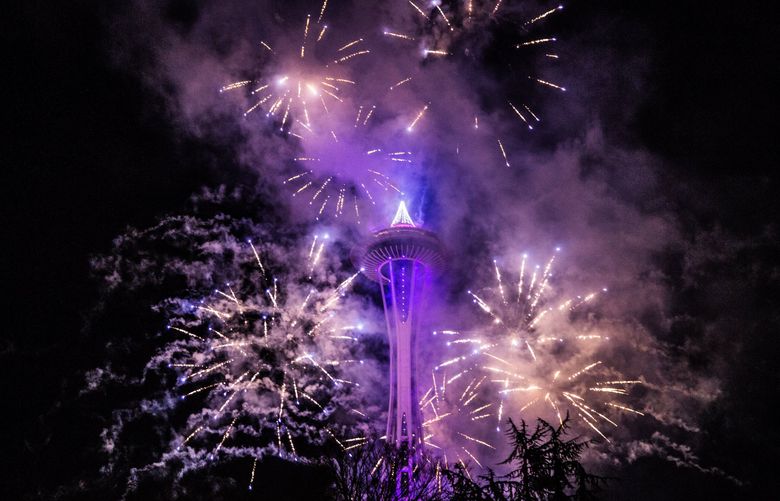 The wind advisory is expected to last until 4 a.m. Wednesday, said Carly Kovacik, a meteorologist with the National Weather Service in Seattle. She also said the mix of weather could lead to a few thunderstorms, some isolated lightning and even hail.

It sounds like the sky will have some kind of a show for those willing to bundle up outside regardless of which way the wind blows.

Rain coverage has been increasing over the last couple of hours and this trend will continue through the day today. Plan for a wet and windy New Year's Eve. #wawx pic.twitter.com/AEbzpoFdtO

Christine Clarridge: 206-464-8983 or cclarridge@seattletimes.com; on Twitter: @c_clarridge.
Asia Fields on Twitter: @asiakmfields. Asia Fields is a former investigative reporter at The Seattle Times.