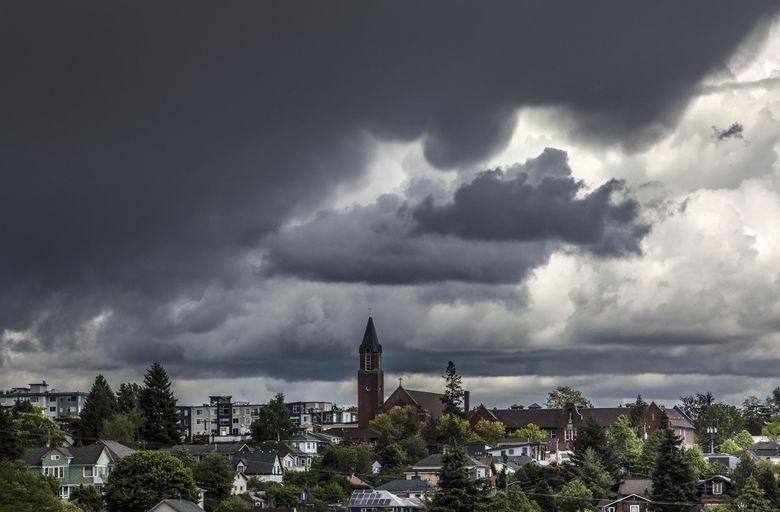 Clouds roll in over the Central District in Seattle as a storm approaches. Clouds and rain and our famous “marine layer” are settling in for a long stay. (Steve Ringman / The Seattle Times, 2015)
By
Christine Clarridge
Seattle Times staff reporter

Say sayonara to the sun.

A series of six weather systems is poised to roll into the Puget Sound region, one right after the other, bringing consistent rainfall for at least the next week. While none of these events on its own is forecast to be problematic or spectacular, together they signal the beginning of a long, gloomy wet season known to some as “The Big Dark.”

“We’re getting into the wet fall pattern,” said Mike McFarland, a meteorologist with the National Weather Service in Seattle, “and I can’t promise any dry days.”

Western Washington woke up Wednesday with the first front already having brought cold air, rain and some bluster. And while that “stalls and weakens,” a second cold front will catch up to the first one, dropping temperatures farther and bringing down the snow line.

On Thursday, the region will be hit by a cool air mass with strong onshore flow, bringing periods of rain or showers in the morning and a possible weak warm front later in the day, McFarland said. Then we get yet another possible cold front — bringing more precipitation Friday and into Saturday — and another warm front by Sunday, he said.

Most of these weather systems have not yet fully developed and are currently just one big frontal system brewing over the northeast Pacific Ocean, McFarland explained on Monday.

“Additional systems will develop much closer to our coast as a strong jet stream advances across the north Pacific [Ocean] and points toward the Pacific Northwest,” he said.

The expression “The Big Dark” has been used by weather service staffers in the past to refer to this period between October and March when it feels like there’s constantly gray overhead. Logan Johnson, the meteorologist in charge at the weather service’s Seattle office, doesn’t care for the expression. He prefers something less dramatic: “winter.”

“We don’t name storms, and we try not to use the word ‘historic’ before they happen,” Johnson explained from the screen-filled control room of the weather service office at Sand Point.

Still, he understands the term’s allure. Nights are long this time of year, and the days can be dim. People’s “personal tolerance” for both going to work and coming home in wet darkness can be stretched toward its limit.

At about 47 degrees latitude, Seattle has one of the most extreme dark seasons in the continental United States. We get fewer than 8 ½ hours of daylight on the shortest day in December, and what little daylight we get is often shrouded by clouds.

Seattle psychiatrist David Avery, who’s studied circadian rhythms (our “body clock”), has previously said that is why so many of us experience seasonal affective disorder, a depression that’s tied to changes in seasons and, more specifically, the amount of light to which we are exposed.

The next two weeks will provide a stark visual cue that The Big Dark is upon us. In addition to dreary skies, we’ll see most of the remaining leaves fall from the trees by Halloween. (Speaking of which, trick-or-treating trips have about a 50-50 chance of being wet any given year around here. Consider incorporating a raincoat into your costume.)

Now is a great time to adopt a local storm drain and spend a little time clearing fallen leaves out of it to prevent flooding, said Ted Buehner, a former weather service meteorologist who now works for a local radio station.

Because our rainy season often runs into April, May and June — sometimes even creeping past the Fourth of July — transplants tend to hear all-too-true legends like “June-uary” or “June Gloom,” or that “the real first day of summer is July 5.”

Wetness, windstorms, winter flooding: It’s all part of what makes this corner of the country unique, Johnson said.

But, especially for those who didn’t grow up with it, a winter spent here can feel extreme. When we recently asked people to send us their weather questions, many were curious why the sky is always gray. One such inquisitive reader was Kelly Kinney Fine, who lived in Seattle for eight years before moving this year to Texas and wondered why there appears to be a giant cloud “parked over Seattle” most of the time and also how far that cloud stretched.

What Fine was seeing was the marine layer, a sort of foggy cloud that can hover over coastal environments like this one for long periods because of the difference between air temperature near the cold water and air temperature above.

“In Seattle, it certainly felt like we were under one continuous cloud most of the time,” Fine wrote in an email. “Most of the time, there just didn’t seem to be any end or edges to the cloud. I’d just look up and see one continuous blanket or ceiling. When I was really itching to see the sun or stars beyond, the cloud sometimes reminded me of a tent ceiling, and I wished that I could unzip the door of the tent and crawl out.”

The cloud sometimes reminded me of a tent ceiling, and I wished that I could unzip the door of the tent and crawl out.

Editor’s note: What are you curious about? Ask your weather question below, and we might answer it in an upcoming story.