Skip to content
By
Maya Leshikar
and
David Gutman

Ruth Jacobson has a list of things she wants Joe Biden to do once he’s sworn in as the nation’s 46th president. She wants him to reinstate and bolster environmental protections; restore the nation’s standing in the global community; and to implement kinder, more humane, immigration policies.

But a first step toward all those things, she said, is getting the coronavirus pandemic under control.

“I just suspect having a more rational approach to presenting and solving problems will help, will get us started on the road,” Jacobson said. “At least if everybody’s on the same page and people are not prevented from saying what is clearly true.”

As the nation prepares for a Biden presidency, Washington residents have a lot on their agendas for what they want to see him tackle first. Though that list is varied, one issue many have in common: fighting the spread of the coronavirus.

“The states seem to be having such a hard time rolling out the vaccine, I don’t fully understand why,” said Jacobson, of Seattle. “The states knew the vaccine was coming, and I think they should’ve known not to expect much help from the current administration.” 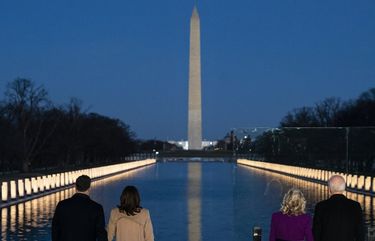 A substitute teacher in the Shoreline School District, Jacobson said she hopes Biden can get the country back on some sort of path toward normalcy.

Vutrala Narayana of Bellvue understands the dilemma facing parents and educators. His son will return to in-person sixth grade at his private school, at least part time, soon after Biden is inaugurated.

He worries that “we’re going to kick ourselves if kids get sick,” but still thinks it’s better than the alternative.

He thinks that social compliance with virus-mitigation measures — mask-wearing, social distancing — is not going to improve, nearly a year into the pandemic.

“I think we’ve reached a limit,” Narayana said. “The only thing we have left is vaccination.”

“Get the shots out quick, is probably the main thing,” Narayana said.

He describes himself as “middle left” politically but has conservative friends and worries about the widening schisms in the country.

Reaching out to “middle ground Republicans” should be a top priority for Biden, Narayana said, as he worries about “what’s brewing out there” if conservatives feel too marginalized.

He said the violence at the U.S. Capitol hasn’t helped in that regard, and “the fact that there’s an impeachment going on doesn’t seem to help too much,” Narayana said. “I really hope there’s some kind of cool-down from both sides.”

A University of Washington student and president of the campus Young Democrats, she says the additional stimulus money promised by Biden is necessary to help struggling populations, but she would like to see it go even further than that.

Almost a year into the pandemic, “people are dying, hospitals are overrun, the vaccine is not being properly distributed and misinformation is running rampant,” she said. “It’s ridiculous.”

Draper said there was a wide variety of opinions in her club about what should be next on Biden’s list, but “the overarching theme is that we need to be protecting minority and/or vulnerable populations.”

This means increasing the quality of life for the working class, student debt cancellation, health care reform, raising the minimum wage and racial justice, she said.

And after a summer of protests over racial injustice, she said that not addressing it would be “ignoring months of outcry.”

“I think we have been a leadership-less country for the past four years, and what leadership we had was filled with hate, and vile,” Clarke said, “so I’m glad we are moving our country back in a positive direction.”

As a diversity educator, she hopes Biden immediately overturns President Donald Trump’s executive order on diversity training that she said is a restriction on her job.

Executive Order 13950 prohibits federal contractors from using certain concepts that promote “stereotyping and scapegoating” in their diversity and inclusion training, but it was blocked by a federal judge in December. Clarke said she revised some of her teaching content that focused on white privilege and critical race theory, but expects Biden to take action.

“We are at a time when our country desperately needs diversity training,” Clarke said. “You can’t do better unless you know better, and I think that’s why the educational component is so necessary.”

She said she is glad that Biden at least talks about issues of inclusion, and has “a Cabinet that is a microcosm of society.” She said she would like to see people around the country start having conversations about diversity.

“I think a national conversation would be really beneficial for our country. And to form a diversity task force to address these issues and set up an agenda for us where we’d be free and we could talk about the issues,” Clarke said. “We don’t know how to talk to each other anymore.”

Carlos Lugo, 38, has been working from his home in Tacoma in his role as a strategic advisor for the Seattle City Council. He said that Biden owes a large part of his success to Black and other voters of color, so he should be ready to combat systemic racism even if it’s uncomfortable and goes against the status quo.

Like others, he said that dealing with the immediate crisis of the coronavirus is “national priority No. 1.” He wants to see Biden rally Congress to put together a strong stimulus package and ramp up production and distribution of vaccines. But masks and basic pandemic strategies shouldn’t be political, he added.

He also wants Biden to help the U.S. regain lost ground on climate control and reassert leadership around the Iran nuclear deal, aimed at reducing that country’s ability to make weapons.

“America’s standing in the world has really gone down,” Lugo said, “and that opens us up to enemies asserting their dominance through their soft power while we are still trying to figure things out.”

The insurrection in Washington, D.C., disturbed Lugo. And although those familiar with Trump’s rhetoric weren’t surprised, he said, it did not lessen the horror of watching rioters storm the Capitol.

Lugo said what’s important right now is for Biden to “reassure the country that the adults are back in charge.”