Maybe we’re evolving into creatures who communicate best via flashes and lights because of all the time we’re spending on Zoom and in front of other screens. Or maybe it’s because we just need to know — and to show — on some very basic level that we’re here. That we’re alive. That we’re surviving.

Or maybe we just have more time at home.

But whatever the reason, Americans are going big on holiday décor this pandemic year, according to a survey of 2,000 Americans by online interior design company Modsy that found nearly 70% of Washington residents saying they plan to do more than ever before. 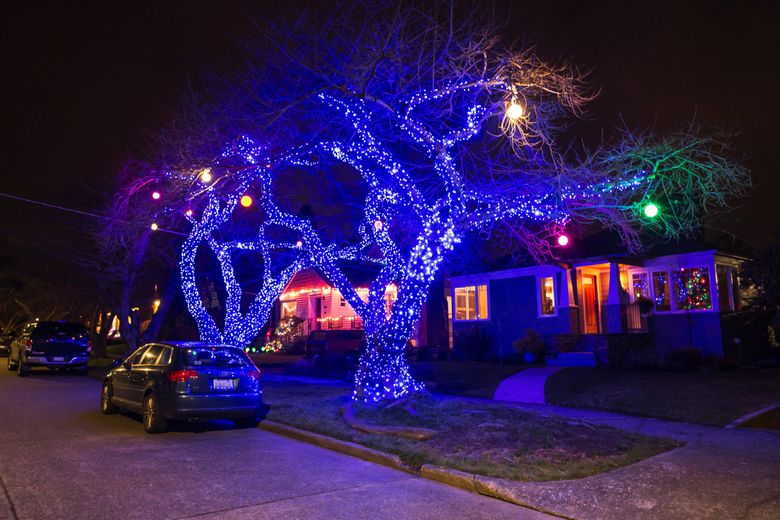 Send us photos of your holiday lights and decorations

Nancy Goldov, a Seattle-based psychologist and member of the Washington State Psychological Association, said people know this winter is looking dark for many. The pandemic has forced us indoors most of the time, and the Centers for Disease Control and Prevention has recommended avoiding travel during the holiday season.

To battle that loneliness and disruption to our traditional celebratory routines, people may be doubling down on the traditions we still have, the ones that don’t require any face-to-face contact at all.

Tanya Gutierrez, of Bremerton, and Lenore Higbee, of Port Orchard — who are both part of the Facebook group Kitsap Christmas Light Displays, which features, among other things, a touring map — are among those determined to make this year’s holiday bigger and better.

For Gutierrez and her fiancé, James Mort, holiday décor was one of the things they bonded over during their courtship. His parents were known for decades as having one of the biggest light displays in Kitsap County — and they inherited that over-the-top spirit as well as all the heirloom decorations.

Even in normal years, “we’re 10 times as big as they were,” said Gutierrez of their home in Bremerton.

Gutierrez said their family’s business, Morty’s Lawn Mower and Small Engine Repair, is struggling, but they’re doing without other things to keep the illumination on.

“People need it more than ever because everyone is down. People are dying, getting sick, being separated from their families. They’re hurting financially; they’re hurting for food,” she said.

“We’re broke, but we have each other, the Christmas lights and the snow and we are completely happy about it.”

For Lenore and Tom Higbee in Port Orchard, the joy of having their own property after years of living by the dictates of military housing ignited their efforts to put on jaw-dropping displays the last few years.

“Right now, with COVID, there is so much unknown and everyone is trying to find something to be excited about,” said Lenore Higbee. As a treat for their neighbors, they added music to their display.

“It was pricey, but we wanted to give people something extra,” she said.

Where to see holiday lights in the Seattle area in 2020

Goldov said the increased interest in holiday lighting may have both ancient and contemporary roots. She wonders if we’re being inculcated into the world of Zoom and being forced to hone new skills for communicating.

“Are we getting more attuned to all the lights or have they always been evidence that on a very basic level that someone was outside and there to put up the lights,” she said.

In the Jewish tradition, it’s customary to put the menorah in the window during Hanukkah to say, “We are here,” Goldov said.

And affirmation of life, she said, is exactly what’s needed this year.