At least 78 heat-related deaths have been confirmed by the state Department of Health following the extreme heat wave that scorched the Pacific Northwest in late June.

The heat wave — which a group of scientists said on Wednesday would have been nearly impossible if not for climate change — has caused hundreds of deaths in Oregon and British Columbia, and local officials say they fear more deaths will be discovered in the coming weeks.

The heat wave began June 26 in Seattle and sent temperatures at Seattle-Tacoma International Airport soaring above 100 degrees for a record three days. It peaked at 108 degrees. Patients overwhelmed emergency services, utilities saw spiking electricity demand and roads buckled because of the heat.

The rising death toll underlines the heat wave’s severe impact on human health and how extreme temperatures often put older adults and those without shelter at the highest risk.

“Heat waves [are] how climate change kills us today,” said Friederike Otto, of the Environmental Change Institute at Oxford University, one of the scientists who tied the heat wave to global warming in the study announced Wednesday.

“Heat-related deaths are preventable,” said Kristie Ebi, a professor in the University of Washington Center for Health and the Global Environment. 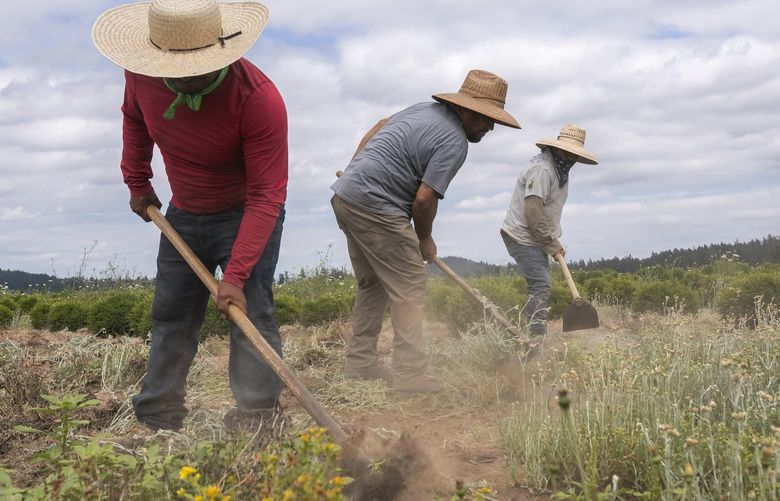 The heat wave’s deadliest day was June 29, when it was to blame for 33 deaths statewide, according to the state health department.

The statewide death count is considered preliminary and the state health department said it will take at least another month before a near-final count of deaths due to heat is available.

Beginning July 1, The Seattle Times contacted all 39 Washington counties to request information on heat-related deaths. So far, counties have reported at least 99 suspected or confirmed deaths to the Times.

Many are considered preliminary as autopsies are performed and pathology testing is completed. Three counties have yet to respond to requests for information.

Many local coroners and medical examiners said they believed an accounting of heat-wave deaths would remain incomplete for weeks. Some feared, or expected, more will be discovered over time.

“The nightmare scenario, of course, is there’s somebody out there who lives alone and is still out there and we’ll find out later,” Dan Bigelow, the prosecutor and coroner in Wahkiakum County, said last week. At the time, Bigelow was not aware of any deaths in the county.

Thurston County Coroner Gary Warnock said he expected any numbers reported in the early aftermath of the heat wave to be adjusted upward.

“There are some people who aren’t found yet,” Warnock said on Tuesday. Warnock said he had sent an investigator out to the site of a decomposing body earlier that afternoon, suggesting that it was possible heat had been involved in the death.

Warnock said he expected more deaths to be discovered during welfare checks. As of Tuesday, Warnock was reporting five preliminary heat-related deaths in Thurston County, all men ages 39 to 63. One man who died was living without shelter and often stayed near an Olympia church, Warnock said.

Warnock said he was waiting on pathology results to determine if the men died while dehydrated before confirming these deaths as heat-related.

The information provided by coroners and medical examiners makes clear that many of those killed by the heat were older Washingtonians or those without access to shelter.

Three people in Benton County didn’t have access to a working air-conditioning unit and died at home.

A 31-year-old woman experiencing homelessness in Shelton was found dead on a city street, wearing four layers of clothing. Another woman in Bellevue was found dead after a call from her neighbor went unanswered and the neighbor stopped by to check on her.

Sophanna Sin, whose father-in-law died in his Burien home last week from the heat, said the 77-year-old was a great father, grandfather and friend.

“The heat was so unexpected; we definitely weren’t prepared to lose a loved one from it,” Sin wrote in a message to The Seattle Times.

Even after the state finishes its accounting, the full impact of the heat wave’s impacts won’t be clear.

Heat is often a quiet killer. Typically, only a small portion of those who die during heat waves perish due to hyperthermia, or when the body dangerously overheats.

Researchers will seek to calculate the number of excess deaths — deaths that wouldn’t have happened otherwise — by analyzing comprehensive death data and comparing the time period of the heat event to similar stretches of time during previous years.

“For heat, the number missed is very large,” said the UW’s Ebi, who plans to study this event and estimate excess deaths due to heat. “If you don’t do these analyses, you’re not going to be able to know how many people died.”