George Floyd’s murder by then Minneapolis police officer Derek Chauvin served as a wake-up call for many. It sparked months of civil unrest and promises by companies and lawmakers to dismantle anti-Blackness.

As Black community leaders look back over the past year, they say that not enough has changed. While they expressed hope that public perception of racism has shifted, they wondered if it would survive for the long haul.

In a state where Black people make up 4.4% of the population, some Black leaders in Washington say they have become more resolute in their communities’ liberation. In the past year they created funding opportunities for Black-led organizations, started racial equity consulting firms, and spearheaded legislation to hold law enforcement accountable.

While they commended the progress in state and county policy, the community leaders lamented the continued killings of Black people. Systemic change in housing, education, and policing is still needed, said TraeAnna Holiday of nonprofit Africatown and the coalition King County Equity Now.

When the pandemic hit, Valériana Chikoti-Bandua started a consultancy firm called Necessary Interruptions to center Black liberation in racial equity work. She compared the racial violence in America to a heart attack. “The United States has been prescribing itself Tylenol versus actively going in and having heart surgery,” Chikoti-Bandua said.

The Tacoma-based racial equity strategist has navigated anti-Blackness everywhere she’s called home. A former refugee from the People’s Republic of Angola who was born in Zambia and raised in Papua New Guinea, Chikoti-Bandua’s experience as a Black woman has shaped her worldview. 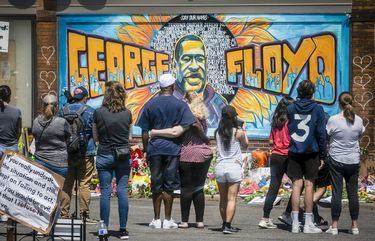 She works to dismantle anti-Blackness through assigning clients homework and videos to watch. Following an intake survey, she creates a customized plan for her clients with the ultimate goal, for instance, of helping them hire and create pathways for Black leadership in their companies. Her programs focus on the history of anti-Blackness, beginning with the Transatlantic slave trade and abolition, to the persistence of anti-Blackness today. An anti-Blackness pyramid she created shows how it progresses from dehumanization to death, in the physical form or Black people being forced to leave a space that is not safe for them.

But she wonders, “Why does it almost always have to escalate to death for us to be centered?”

Chikoti-Bandua said she was shocked when Chauvin last month was found guilty of murdering Floyd. While there was accountability in that case, she said, several Black people have since been killed by police, including Ma’Khia Bryant in Columbus, Ohio, and Daunte Wright in Brooklyn Center, Minnesota.

She expressed concern about performative allyship, particularly in the Pacific Northwest, where Black Lives Matter signs can be found plastered in the windows of homes or businesses.

At the same time, Chikoti-Bandua said that she is extremely hopeful for the future.

“People are recognizing that the shipwreck that we’re seeing can’t be denied. The debris is on the water and we all need to do something about it,” said Chikoti-Bandua, who is also a board member of Surge Reproductive Justice.

The Washington Legislature’s recent passage of the police accountability package has showed that the state is leading the nation in incorporating community members’ voices in policy and legislation, said Holiday from King County Equity Now.

Holiday said Floyd’s death made many people wake up to truths of the past, yet there’s still work to be done. She said there needs to be greater access to education and affordable homeownership in King County. Community-led development projects should be prioritized by for-profit developers, she said. Holiday wants developers and politicians to ensure that other King County cities are not gentrified to the same degree as Seattle’s Central District neighborhood, where the Black population dwindled by 60% in 50 years.

King County Equity Now, a coalition of Black-led organizations, formed following the disproportionate impact of COVID-19 on the Black community last year. The coalition focuses on investing within communities, and has seen some success in their mission: Last year they were successful in persuading Seattle to transfer decommissioned Fire Station 6 to the nonprofit Africatown for the development of a technology center.

Along with the coalition Decriminalize Seattle, the grassroot group persuaded the Seattle City Council to trim the Seattle police budget. While their demand was partially met, the council approved the hiring of new police officers.

Last week, King County Equity Now demanded that local politicians invest at least $300 million of recently awarded federal COVID-19 relief funding directly to the Black community, which has been disproportionately affected by the COVID-19 pandemic. For instance, the Black population makes up 6.6% of county residents and represent 9.9% of COVID-19 cases, according to recent Public Health — Seattle & King County statistics. And Black-owned business were hit harder than any other business population. According to the National Bureau of Economic Research, Black business owners decreased by 41%, compared to a 17% drop in white business owners.

On Tuesday, King County Executive Dow Constantine announced a $600 million spending proposal that is partially funded by the American Rescue Plan Act. Out of the total, $25.6 million is earmarked for an economic opportunities fund for Black, Indigenous and People of Color residents.

“There’s a need to give to the Black community what is owed to them through the work and efforts that they’ve already done in terms of their free labor that built the wealth of this country,” Holiday said.

To that end, the Washington Black Lives Matter Alliance worked on 36 bills as part of an over $500 million 2021 Reparations for Black Lives package. Soon, WA BLM Alliance’s lead strategist Sakara Remmu said, she hopes to see progress in the work group that will help implement a kin-specific licensing so that Black children who are being removed from their homes will be sent to family members instead of foster care, and the caretakers will get financial support from the state. Black community organizers had advocated for the recently passed bill for 40 years.

Overall, Remmu said, not enough has changed for the better in the year since Floyd’s death. At the local level, particularly in King and Pierce counties, she said there has been a collapse in police oversight. In Seattle, she said that city officials “once again failed to do anything of substance.”

She said she was disappointed that former Chief of Police Carmen Best, the first Black woman to lead the police force, was put in a position where she needed to resign. City officials did not do anything to create sustainable change that benefited the Black community in the past year, Remmu said.

Meanwhile, oversight of the King County Sheriff’s Office is heading in the right direction, she noted, citing a referendum passed last year to make the sheriff an appointed rather than elected position. Remmu said the King County council and Constantine were effective at involving community input in discussions around oversight of law enforcement.

Her life has changed over the year, and she no longer caters to others’ comfortability when calling out racism and social inequities.

“White supremacy created everything that we are fighting against today,” Remmu said. “It’s not just an ideal that is incepted into the minds of people. It is routinely, on every continent that it has existed, enforced with brutality … and unnecessary government intervention and overreach every single day.”

Along with marching, advocates need to vote, and work toward legislation to ensure that Black people are represented, Remmu said.

“We just want to breathe,” Remmu said. “And we deserve just like everybody else to thrive.”

Following Floyd’s murder,  Black Future Co-op Fund was formed as a philanthropic fund for Black-led organizations across the state. In the past year the organization has raised $12.6 million, half of the founders’ goals. On Tuesday, the fund announced $1 million in grants to 40 Black-led organizations in Washington that are investing in Black communities. Each of the inaugural “We See You” grantees will receive $25,000.

The fund’s co-founder Andrea Caupain Sanderson, CEO of Seattle-based social service provider Byrd Barr Place, hopes that the fund serves as a model that can be replicated throughout the state. In the future, Caupain would like local politicians to center the voices of Black people and to make it easier for their organizations and businesses to gain capital.

“The city has always been so slow to release funding and resources to our communities,” Caupain said.

Chikoti-Bandua spoke of the need for discussions around reparations for Black communities. She would like more funding for grassroot-led initiatives by Black people. Due to systemic racism, she said, Black people who are doing work on the ground may not have an official business under which their contributions are shared. Black liberation cannot only happen from the top down through policy, she said; it also needs to happen at a cellular level by creating opportunities for people experiencing homelessness, for instance.

Moreover, for sustainable change, agencies need to look beyond one-off diversity and equity trainings, which often do not completely dismantle racism within an organization, Chikoti-Bandua said.

“People need to look at uprooting policies and practices that keep people from being able to thrive,” Chikoti Bandua said.