After moving into a downtown high-rise from the suburbs in 2013 to take advantage of the vibrant atmosphere and walkability of Seattle’s urban core, Ted and Priscilla Tanase are now looking to rent a place on the Eastside to temporarily escape the open-air drug use, lawlessness and filth that’s led them to feel unsafe when they walk out their front door.

“We’re going to live away for a year and see what happens,” said Ted Tanase, 79. “I just need a break from here. We have four adult kids and none of them think it’s safe.”

Haley Mae, a 27-year-old Seattleite who works for a digital marketing company, spent her teen years riding buses along Third Avenue to get to middle school and high school. She’s lived downtown since October and says “it feels the same amount of scary” as it did when she was a kid, though she’s now more aware of her surroundings and avoids walking on Third.

“Growing up, (Seattle) felt really remote. Now, it feels very relevant,” as the city has become wealthier and attracted people from all over to settle here, said Mae, who thinks all downtown residents are experiencing low-level trauma from watching people struggle with homelessness and witnessing others shoot up on the sidewalks. “I wish I knew how to pick up needles safely or that there was a place to put them.”

There’s a dual reality downtown residents — particularly those living in the commercial core — have seen unfold in the past 18 months, starting with the exodus of office workers at the beginning of the coronavirus pandemic and culminating with the return of cruise ships and tourists this summer: While many of the tents sheltering homeless residents no longer line the sidewalks and there are clear signs of economic recovery, there remain concentrated areas of obvious drug dealing, rampant shoplifting and street violence that collectively contribute to a heightened sense of unease.

“There are pockets of downtown that have kind of become a free-for-all. And there are other parts that are great,” said Jon Scholes, president of the Downtown Seattle Association. “Those are sort of two truths that can occur at the same time. You can go downtown and have a great time at the Pike Place Market (or Westlake Park) … and then two blocks away, there are people using drugs and suffering on the streets and other people are taking advantage of them. That’s sort of our reality right now.”

Several residents interviewed by The Seattle Times said anyone who moves into the downtown core does so knowing they will have to accept certain sights, sounds and smells that just come with the territory. Some remain cautiously optimistic that the deterioration in living conditions during the pandemic is a temporary situation. But others are mourning what they see as the demise of their own empathy from constantly stepping around bodies and feces, dodging fights and praying they won’t catch a stray bullet.

They all agree the street conditions aren’t healthy for anyone, not for those struggling with chronic homelessness and addiction, and not for those fearful for their safety as they try to live their lives.

Many of the homeless people living downtown got priced out of apartments in the neighborhood or in the Central District and Beacon Hill as those neighborhoods became more gentrified, said Mikel Kowalcyk, REACH outreach manager for downtown. And many of those people, she said, have turned to drugs as a way to cope with trauma and to survive their lives, often choosing to stay downtown because of the relative safety it offers compared to pitching a tent in more remote areas of the city.

People living outside for less than a year aren’t eligible for permanent supportive housing and after the Union Gospel Mission and the Downtown Emergency Service Center closed their nightly shelters due to the pandemic, there were far fewer places for people to go, said Kowalcyk, who every day receives a list of open beds in the city.

“On a good day, there are only eight or nine, but you have 10 different organizations that have hundreds of referrals that get put in a day,” she said. “People want to come inside, people want a better quality of life. We don’t have the resources to match the needs.”

Despite the challenges, data shows downtown continues to grow and attract new residents: Over the past decade, 48% of Seattle’s residential growth has been concentrated in the three square miles that make up downtown, from Denny Way to Pioneer Square and from the waterfront to Interstate 5, according to the DSA. More than 6,400 new living units will have been constructed downtown by year’s end, the DSA said in an August news release, with another 5,500 units expected to be completed by the end of 2022. Average market rent in the area exceeds $3,000 per month. 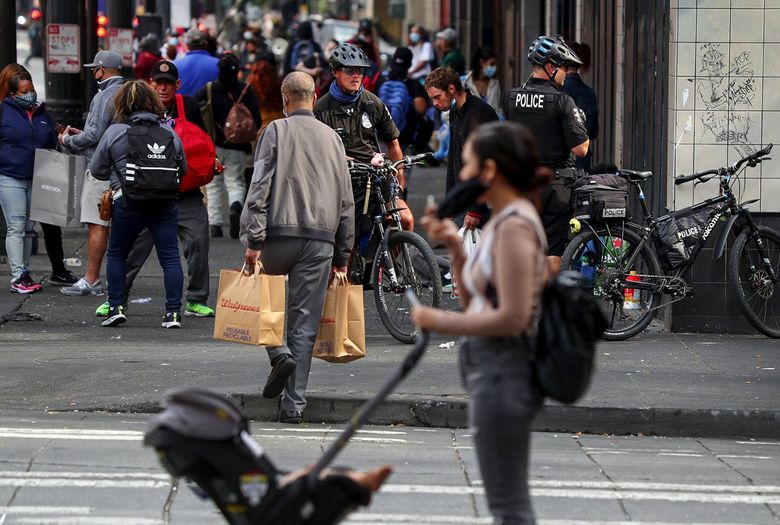 76% of households are renters

21% of the total population lives in group housing such as correctional facilities, nursing facilities, university housing and transitional shelters

Now with a residential population of 98,000 people, nearly 1/10th of downtown residents live in the commercial core, within blocks of the Pike Place Market, 5th Avenue Theatre and Westlake Center. The area is especially attractive for workers who don’t want to drive to work, families and seniors, who have easy access to doctors and pharmacists and can create tight-knit communities and live in buildings with elevators, said Scholes, who has raised his own children downtown for the last nine years.

A year and a half after the pandemic shuttered many of the amenities that drew downtown residents to the area in the first place, public life has returned in many ways. While the number of office workers commuting into downtown has remained flat, with only 24% of pre-pandemic workers returning to their office buildings, 75% of businesses and arts and cultural venues that were forced to close due to COVID-19 have reopened, Scholes said. From May through August, downtown also saw a return of out-of-town visitors, and at a summertime high a couple weeks ago, tourists accounted for 87% of their pre-pandemic numbers and 70% of hotel rooms were occupied, he said.

The DSA is spending more than $500,000 this year to pay off-duty Seattle police officers to patrol downtown streets at a time when the Seattle Police Department’s on-duty patrol officers are stretched thin in the midst of a citywide staffing crisis and often don’t respond to 911 calls unless a violent incident has occurred, said Scholes. The business association, which employs its own downtown ambassadors and homeless-outreach workers, is also contracting with a power-washing company to hose down alleys and sidewalks, augmenting the DSA’s own cleaning operations to rid the streets of urine, feces and other biohazards, he said.

Crime statistics for the area are difficult to parse: SPD’s data shows a dramatic drop in both violent crime and property crime between 2019 and 2020, but any comparison is distorted by factors like the decline in daily visitor population due to the pandemic.

Sgt. Randy Huserik, a Seattle police spokesperson, confirmed the downtown’s foot beat officers were transitioned to bike units years ago, so officers aren’t nearly as visible on downtown streets as they once were. The department’s Navigation Team, which was created in 2017 and composed of police officers and outreach workers who worked to clear homeless encampments and refer people living outside to shelter, came to an abrupt end last October after political sparring between Mayor Jenny Durkan’s office and the Seattle City Council.

During the ongoing pandemic, Seattle police are also restricted from booking people into jail for most nonviolent offenses, he said.

“We can’t arrest for simple possession (of drugs) anymore, which doesn’t leave us a whole lot of options,” said Huserik.

The west side of Third Avenue, between Pike and Union streets, remains a problem spot. An encampment of about 30 residents is no longer there, but the block remains a gathering site for drug users, outside the boarded up storefronts of the neighborhood’s grocery store, a T.J. Maxx, a gyro restaurant and a beauty-supply store, artist and downtown resident Cynthia Marin said.

On a recent weekday, Marin did something she rarely does: She walked that stretch of Third, where she said the number of people seen heating bits of tin foil with cigarette lighters and sucking in smoke through makeshift pipes was a fraction of those who usually populate the block, after Seattle police officers were seen contacting people sitting or squatting on the sidewalk. But days later, Marin reported the crowd was back to being 20-people deep.

“I don’t think you quit your city if it has problems,” said Marin, 77. “I think they’re solvable but the will to solve them hasn’t been present.“

More than 40% of the downtown core’s population is nonwhite and 76% are renters — and the area’s racial and economic diversity is one of the reasons Mark DeWeirdt, 60, has “chosen to stay and hunker down,” even as he’s seen fed-up neighbors move away.

“Where else would we want to live?” he asked, talking by phone as he walked from a business meeting to his condo building on Second Avenue. “I spent 20 years in Sammamish, which is a nice community, nice for raising kids, but it bored me to death. There’s an intensity downtown … it’s just a more interesting place to live.”

His wife, Dr. Dorothy Ling, hasn’t ruled out leaving the neighborhood, but said she’s made more friends and feels a greater sense of community in the eight years they’ve lived downtown than when they lived on the Eastside.

“It’s one of the things that’s probably kept us from totally fleeing,” Ling said.

Though DeWeirdt still loves downtown living, he’s noticed what he sees as an increasing lack of respect for others, from the buskers and street preachers who amplify their instruments and bullhorns to the point they can be heard in apartments dozens of floors above street level, to the drivers who blatantly tear down First Avenue at freeway speeds, confident they won’t be ticketed.

He recently walked past a man who had been stabbed in the face in the middle of the afternoon. Another time, he saw a half-naked man passed out in an ATM vestibule, a heroin needle still hanging from his arm. But the image DeWeirdt can’t shake is that of a man he saw passed out on his knees, his cheek pressed to the sidewalk.

Carole Williams, who has lived downtown for more than 30 years, said she never thought anything of walking home alone from the Paramount or 5th Avenue Theatre late at night. Now, though, she won’t leave her apartment after 9 p.m.

Williams, 82, said her empathy for people struggling with addiction or living on the streets has evaporated.

“Five years ago, if I saw somebody lying on the street, I’d call 911. Now, I’m walking over people, passing them by,” she said. “I used to feel bad about it but now I think, ‘They’ll be dead in a few days so why bother?'”

Leslie Buker, 37, has been subjected to threats and has had the front door of her condo building on Third Avenue between Pike and Pine Streets slammed in her face by drug users hunkering in the building’s alcove.

“The open drug and alcohol use on the street just blows my mind,” said Buker, an associate creative director for a local advertising agency.

She still shakes people on the streets who “look dead” and will call 911 if they don’t move. Last winter, Buker said she stayed with a young woman who was high and topless as a group of men pressed ever closer, until police arrived 50 minutes later.

Though she tries to intervene where she can, Buker has also learned to block out the nightly screams of anguish she hears emanating from the alley her condo overlooks.

“I hear it, but I just don’t notice it anymore,” she said.