Those hoping to cross Puget Sound one last time before school begins will have to exercise some patience this weekend, especially if those plans involve a car.

Ridership on Washington State Ferries is approaching pre-pandemic levels, or about 82% of 2019’s numbers, according to the agencies. Vehicle traffic — more so than walk-on passengers — is bolstering those numbers. Since June 19, the system has logged 91% of pre-pandemic car volume. That number could easily hit or exceed 100% over the long Labor Day weekend.

Walk-on volumes remain depressed, at 62% of what they were three years ago. Spokesperson Ian Sterling speculated that was due to continuing remote-work policies and the addition of several fast ferries to and from Kingston, Bremerton and Southworth.

The ferry system is not as well-equipped to handle these large flows as it was in 2019. Crew shortages have led to daily trip reductions to Bremerton, Kingston and Vashon Island, with no guaranteed timeline to return to what was once considered normal operations. 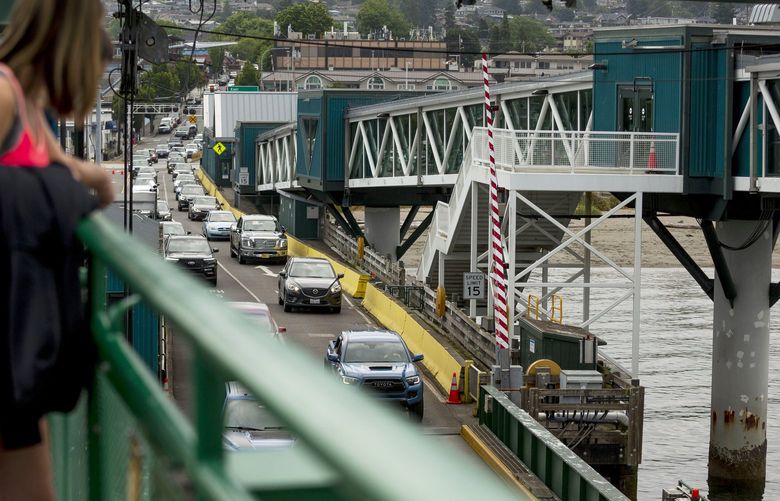 WSF has failed to restore full service, especially to routes lower on its priority list. While the fleet itself has had its struggles — most dramatically the ferry Cathlamet’s July 28 crash off the Fauntleroy dock in West Seattle — it’s the lack of crew, particularly deck officers, hobbling the largest ferry system in the country.

Sterling said there would likely be “tens of thousands” of passengers on ferries this weekend. The busiest sailings will be westbound Friday and Saturday, as vacationers seek refuge in the San Juan Islands or on the Olympic Peninsula, and then eastbound Sunday-Tuesday as travelers return home. Waits on some routes could be three hours or more.

The next passage due for full restoration is between Edmonds and Kingston, but the head of WSF, Patty Rubstello, said she could not say when.

“Unfortunately, our crewing levels are not at a point yet where we can begin adding full service back to our next route — the Edmonds/Kingston route — even on a trial basis,” she said in a statement. “Doing so would put our restored runs in jeopardy. Until then, we will continue to add a second vessel to that route daily as crewing allows.”

State Ferries canceled 642 sailings between April and June of this year, according to the latest performance update from the Washington State Department of Transportation — close to 2% of all sailings, exceeding the system’s goal of 1%.

At the same time, on-time performance took a nosedive last quarter to less than 82% — well off the agency’s goal of 95%.

Farebox revenue is missing its mark as well: The $46 million collected last quarter was $8 million less than forecast.

The Anacortes, Point Defiance and Mukilteo routes are the closest to pre-pandemic normal, according to WSF.

There’s nothing you can do to make the ferries go faster, but here are a few tips for making your travel a little smoother, courtesy of Ian Sterling, spokesperson for Washington State Ferries:

• Walk on board if you can. The ferries’ car decks fill quickly, which means waiting in line while one, even two boats leave without you. You’ll find no such trouble boarding by foot.

• Download the WSDOT app. There, you’ll be able to track alerts – including whether a route is running two boats or one and whether there are any delays. You can also use the “vessel watch” function to see exactly where the boats are at any given time.

• Pack food and water. In the event you end up waiting longer than you hoped, it will pay to have something to snack on. Some ferries have reopened their food galleys, but not all of them, so it would be a gamble to count on sustenance aboard.