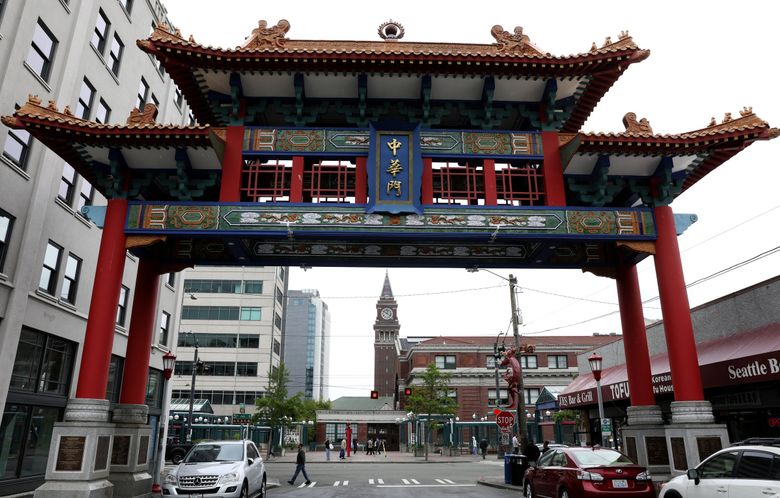 A look through the Historic Chinatown Gate shows the International District/Chinatown Link Lightrail Station, Thursday, May 16, 2019 in Seattle. Residents and leaders are ambivalent or undecided about how to add a second subway station and tunnel here for ST3, but the gate could be incorporated into future plans. (Ken Lambert / The Seattle Times)

So it’s no easy task to reassure people everything will be OK when Sound Transit builds another light-rail station to open by 2035 alongside the existing International District/Chinatown Station.

Politicians have not picked a station site yet for fear the wrong choice might damage the only majority-minority neighborhood in a 12-mile, 14-station corridor that will connect Ballard, downtown and West Seattle. Some 2½ years after voters passed the Sound Transit 3 (ST3) tax increase, elected leaders on the regional transit board voted Thursday to keep at least four Chinatown-ID alternatives alive for environmental study.  Community advocates have asked politicians to do more research before eliminating options.

One option would put trains directly under Fifth Avenue South, an easy walk for the district’s residents. A second alternative, to avoid lengthy street closures, would set the boarding platforms 200 feet deep under Fifth, adding four minutes to transfer times as people wait for elevators at rush hour.

Also being considered are shallow and deep versions under Fourth Avenue South. That would move construction a block west but add as much as $500 million to the $7.5 billion corridor cost estimate because it would require rebuilding the city road viaducts that carry Fourth, which the city says are in good condition.

Access matters, because nearly 70,000 people a day are projected to board or exit a train in the combined International District/Chinatown Station, surpassed only by the numbers at Westlake Station in the future 116-mile light-rail network.

People could exit onto Fifth Avenue a few steps from the district’s paifang, the red Chinatown Gate that marks the way to restaurants, tea shops, bakeries, gift stores and brick apartments. A fifth of the 7,000 neighborhood residents are over 65 years old, and the median household income is half the Seattle average.

“What Sound Transit’s plan will do is, it will just accelerate the nature of the threat, for the continuation of the Chinatown International District,” said Larry Yok, a trustee at The Wing Luke Museum of the Asian Pacific American Experience who also is a volunteer in ST3’s stakeholder advisory group.

“Chinatowns are under threat all over the country,” Yok said. “If you look around, the New York Chinatown is a mere shadow of itself. The Washington, D.C., Chinatown is really more of an ethnic destination but there are no Chinese who live there. The Portland Chinatown has disappeared.”

The district remains a cultural crossroads of Seattle’s Chinese, Japanese, Filipino and Vietnamese communities, which have built small businesses there since the early 20th century. If lost, it will never be re-created.

“This is the last stand for us, to hold onto our traditions, have culture, a place to gather as a family,” said Betty Lau, a 71-year-old teacher who leads outreach for the Chong Wa Benevolent Association. She favors moving construction to Fourth Avenue to keep noise, dust and construction equipment at a distance, on the other side of Union Station.

Back in 2016, the transit agency published a cut-and-cover tunnel concept, a five-block trench along Fifth Avenue requiring seven years of construction and an 18-month street closure.

Since then, the design team offered a friendlier Fifth Avenue version — to bore through with tunneling machines, so contractors would excavate a smaller trench for just the two-block, shoebox-shaped train station. That would even save $200 million compared to a five-block trench.

This new option intrigues Tim Lee, a longtime entrepreneur and restaurant building owner. A shallow Fifth Avenue plan would reduce the odds of delays in delivering better transit connections from the Chinatown-ID to Bellevue, Seattle-Tacoma International Airport and Everett.

“Our community would like to enjoy the use of the public transit and the new rail stations sooner,” Lee told a transit committee in March.

But Mayor Jenny Durkan alluded to historic racism as a reason to keep exploring four options at the same committee meeting, inside 108-year-old Union Station next to regional and local train tracks.

“We cannot look at Chinatown International District without recognizing the irony that we’re sitting in a train station where those train systems were built by Chinese labor, where that Chinese labor was excluded from this country by discriminatory laws, where they carved out a toehold here in Seattle, where the Japanese community landed and then we took them and interned them, and this community has been a vibrant part of our city for a long time,” she said.

The community deserves more attention as additional transit lines converge there, she said. “It is the place where everything joins.”

To build a shallow Fifth Avenue station, twin tunnel boring machines might start from west Queen Anne Hill, drill under downtown to the Chinatown International District, then be pulled on skids through the 500-foot-long station before completing their dig near Stadium Station, where tracks would be ground-level or elevated.

Train platforms would be stacked, probably with northbound trains on the upper level, and southbound trains 90 feet down. That way, the station fits directly beneath the street.

A deep station wouldn’t necessarily be easier on the neighborhood. Last decade the 160-foot-deep Beacon Hill Station required five years to complete two vertical vaults for elevators, emergency stairs and utilities, within a fenced-off compound. To dig deep at Fifth Avenue, the agency would take private land for a station entrance and somehow bring trucks through the back streets.

“I know the traffic on Fourth is already busy, so I don’t want to get more pressure,” said businesswoman Elizabeth Kong. She favors the Fifth Avenue site, even though her family owns a Thai restaurant there, in a building that likely would be condemned by Sound Transit to stage construction.

But the Fourth Avenue site offers the advantage of creating a transit entrance closer to Pioneer Square, while complementing the city’s new Jackson Hub initiative that aims to improve walking conditions between the two historic districts.

“It offers the most opportunities to enliven the area,” Yok said.

They say further research could prevent a worst-case scenario, where Sound Transit builds under Fifth, and then the city of Seattle decides to rebuild the viaduct at Fourth.

“The cumulative impacts of ST3 and 4th Avenue rebuilt within close timing would potentially kill the Chinatown International District. Simply put, is there potential opportunity to resolve both issues with one project?” says the development authority’s formal comment letter.

Sound Transit’s own engineers are partway there. They suggest rebuilding the south end of Union Station to add a staircase down to a mezzanine. That would encourage people to enter from the north off Jackson Street, walk past the clock inside the Great Hall, then descend to catch light rail, Sounder and Amtrak trains at King Street Station, or both.

“We’re really glad people are thinking at a higher level to create a more welcoming transit hub in the area,” she said.

Partnerships with private funders, neighborhood development authorities or the FTA could help get the job done, Krochalis said.

“If you’re going to spend $6 to $9 billion to get from West Seattle to Ballard, if you don’t do this cultural and transportation center now, it will never be done,” he said.

“Dim Sum King had people order for to-go for Chinese New Year, and the cars could not go in to get their food. Jade Garden had no water to wash all their dishes” and needed to buy bottled water, recalled Nora Chan, founder of the area group Seniors in Action.

Though merchants would get a 15-year respite between the streetcar and ST3 work, the incident eroded trust in city projects.

An ST3 race and equity report says that when construction hassles are balanced against rider advantages of a shallow Fifth Avenue station, it’s unclear which option serves equity best. Sentiment at a community forum in March leaned toward Fifth, but in one-on-one Chinese-language comments, about three-quarters of respondents favored Fourth.

Durkan argued that picking a favorite now could bite Sound Transit later if someone files a time-consuming lawsuit that claims the agency failed to adequately consider options.

“Based on prior project experience with project development timelines, waiting to identify a preferred alternative until after publication of the Draft EIS [environmental impact statement] could extend the project schedule up to 18 months or more,” staff said by email.

Since the 2016 election, Sound Transit has spent $32.5 million on ST3 outreach and engineering the Seattle corridor. The transit board on Thursday voted to release $60 million more, on the way to spending a budgeted $286 million to complete environmental studies and preliminary engineering by 2022.

Few people have more at stake than Lydia Lin, owner of Seattle Best Tea next to the Chinatown Gate.

With her 24 years of experience and huge choice of organic teas, she can survive a street blockage because of loyal customers, including UW students who arrive by light rail. “They say I’m the best,” Lin said, while she poured boiled water onto a steel tabletop to warm the white teacups she filled with clear oolong from Taiwan’s mountains.

On the other hand, it’s possible Fifth Avenue work could demolish the building that houses her shop. That’s why Lin says she supports a Fourth Avenue station — but emphasizes the site should be a group decision, which she called the Chinatown way.

“People’s success is not just because of one condition,” she said. “We need to care about other people.”