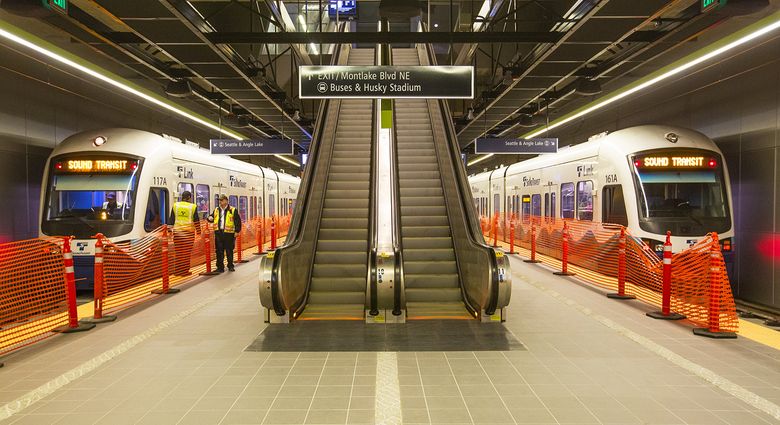 Sound Transit’s 3-mile tunnel to the University of Washington, which took 20 years to deliver, creates new travel options for thousands of people from Wedgwood to Tukwila. The new light-rail extension is also likely to influence where people choose to live and work.

This is part one of a two-part series. Read about Capitol Hill’s light-rail station here.

The arrival of Link light rail at the University of Washington is guaranteed to take at least one car off the road.

Sue Morgan drives from south Beacon Hill very early to hunt for free curbside parking on the back streets north of campus, then walks to lower Roosevelt Way or Red Square, where she maintains websites for the UW Information School.

She tried a local bus through the Central District, then a crowded train-to-bus transfer under downtown, but those trips could take 1½ hours.

Starting next Saturday when a light-rail station opens at the university, Morgan can walk onto a train and take a 30-minute, one-seat trip. “I would totally ride from Othello Station,” she says.

Take her new option, multiply it by thousands, and the result is a new mindset about crossing the gridlocked city.

UW Station and Capitol Hill Station, also opening next weekend, along with the Angle Lake park-and-ride station to open in SeaTac this fall, together are projected to add 45,000 weekday passengers by 2021, for a total of 80,000 in a 21-mile system.

Sound Transit took 20 years from inception to its breakthrough to UW. Agency Chairman Dow Constantine recently called it a “small revolution” in how people get around.

Rail to the UW also may help fuel housing growth in Rainier Valley, after the initial downtown-to-airport line opened more than six years ago.

Is your bus route changing?

“The more you extend the wings of mass transit in all respects — light rail being one of them — it’s going to help affordability,” said Windermere Real Estate economist Matthew Gardner, who wrote an exhaustive study of development prospects along Sound Transit’s network.

For instance, a licensed practical nurse earning $22 an hour could afford to rent near Link and ride to UW Medical Center, instead of shouldering parking, gas and car payments, or a longer bus commute.

According to the American Public Transportation Association, a Seattle-area household that exchanges a newer-year car for a transit pass may save up to $10,930 a year, compared to solo driving into downtown.

Others worry that rail proximity will cause gentrification, when the bourgeoisie pay top dollar to escape traffic, while people in working-class communities move south into cheaper suburbs.

But Gardner said land remains so abundant, once you go beyond trendy Columbia City, there’s little chance of displacing immigrants and lower-income households in the foreseeable future. New housing will evolve at Othello and Rainier Beach, but he doubts Tukwila and SeaTac, which are partly industrial, will command prices high enough to excite major developers.

Red handbills on utility poles woo millennials to check out City Line Apartments, by showing a dot for each train stop between Westlake and Columbia City stations.

A block from the Columbia City station, three of six buildings are finished in the 244-unit development, on the former site of Zion Prep school. The complex provides a fitness center and bocce-ball court, a central kitchen for parties and a slick Seattle feature: a coffee spigot that dispenses the brew you choose with a phone app. Pets are welcome.

Market rents range from $1,600 for a one-bedroom to $2,600 for two bedrooms and two bathrooms. One-fifth of the units are reserved as affordable, under city incentives that cut the developers’ property tax. An additional 156 units are planned next door at CityLine II.

Transit-related growth had been slower to arrive farther south at Othello Station, save for the seven-story Station at Othello Park in 2011.

That’s changing. Othello Station North, with 370 units, is under construction.

“It’s all about the light rail, and the incredible diversity of the neighborhood,” said the developer, Jean-Paul Grenier, vice president of Vancouver, B.C.-based Woodbridge Northwest Communities.

An additional 145 apartments are planned to replace the boarded-up Rose Petals restaurant at Othello. And for those living below the poverty line, an experimental Othello Tiny House Village just opened on an empty lot shared with a tent city.

How will University Link light rail change the way you get around Seattle? Readers weigh in

Next to the station, a crane towers over the future 108-unit Mercy Othello Plaza, where apartments will rent for between $450 and $1,100, on land left over from earlier light-rail construction. The scant 45 parking stalls prove it’s a real transit-oriented development.

“Sound Transit is not interested anymore in being bifurcated, in being siloed into the transportation mission,” CEO Peter Rogoff declared at a groundbreaking event.

Sound Transit 3, expected to be on the ballot this fall, is a $20 billion plan that could create lines to Everett, Redmond, Kirkland, Eastgate, Federal Way, Tacoma, Ballard and West Seattle. The measure would cost households, on average, nearly $400 in yearly property, car tab and sales-tax increases.

What’s missing are jobs for current residents, said longtime neighborhood advocate, Patricia Pascal. She said the city’s philosophy seems to be to funnel priced-out renters into Rainier Valley, where they spend their days commuting someplace else.

Everything you need to know about the UW station

How much you pay, how long it takes, where to put your bike and more

Joann Francis, past president of Homesight, a nonprofit that assists first-time homebuyers, is urging the city to support a center that would offer social services, technology training, a festival hall and space for small businesses, next to Othello Station.

“To me, the issue about affordable housing goes beyond ‘What’s your wage?’?” Francis said.

A different question awaits up north.

Will UW Station, on the east fringe of campus next to Husky Stadium be practical enough to attract crowds?

Sound Transit in 1996 proposed running rail straight from Capitol Hill into the U District, but a $1 billion cost-estimating mistake, and boulders beneath Portage Bay, doomed that route. Former agency Chairman Ron Sims and CEO Joni Earl negotiated an alternate path beneath Montlake Cut and reassured university leaders that Link wouldn’t end there.

The final plan added a footbridge from the station over Montlake Boulevard into the campus.

But train service all the way to the U District is still five years out.

“Many of us here on campus are disappointed,” said student Samer Welaye, who lives south of the university. “As it stands now, west and north campus are the busy areas of the school, and the light rail by the stadium is just a bit far for walking distance.” He said he’d continue using Route 70 buses through Eastlake.

But not John Heyde, a naval officer in Bremerton who is working toward a master’s in health-care administration at UW. He builds an extra hour into his plans because buses to Colman Dock are so unreliable. He’ll choose a train, arriving every six minutes, hoping to shorten his now 12-hour day.

“Either I can get some more sleep in the morning, or work on being more healthy,” Heyde said.

More than two dozen bus routes will reach UW Station, not just in-city feeders but Highway 520 routes from as far away as Issaquah or Juanita on the Eastside.

Seattle Children’s is embracing the new east-campus stop by adding a shuttle from the station. Children’s built a short bikeway from its property to the Burke-Gilman Trail, allowing a traffic-free connection.

Complaints about walking time echo last decade, when detractors said travelers would reject the SeaTac/Airport Station. But ridership has soared beyond projections with 5,571 weekday boardings, as airport workers and travelers willingly walk the 1,000-foot causeway from the terminal to a train.

UW Station lacks a place for drop-offs, taxis and ride-hailing services. Will cars stop in random places? Will potential users give up?

“I don’t think it will be a true disaster, but I worry a lot about it,” said UW Professor Mark Hallenbeck, director of the Washington State Transportation Center.

In terms of people served, the $1.8?billion subway to Husky Stadium represents the city’s biggest transportation improvement since 1989, when the new I-90 bridge doubled the old bridge’s capacity across Lake Washington.

“It’s going to be huge, but it’s the first of two huge transformations that light rail is going to bring,” said Kavanagh.

The second is a northern tunnel to the U District, Roosevelt and Northgate, where construction workers already are framing apartments around the stations scheduled to open in 2021.

Someday people from that end of the city will get to use the elevated Northgate Station and enjoy a crow’s-eye view of traffic on I-5.