Bike traffic on the Fremont Bridge — a major north-south cycling route — increased by more than 12% over the previous year, to 1.18 million rides total in both directions. Along the Second Avenue bike lane, traffic rose to nearly 560,000 rides, soaring nearly 79% from 2018.

Transportation officials and cycling advocates point to three main factors for the increase: Traffic congestion frustrating drivers and bus passengers last year from the three-week Highway 99 closure and eviction of buses from the downtown transit tunnel, expansion of the city’s protected bike-lane network, and the popularity of electric-assist bicycles.

The Fremont Bridge and Second Avenue are among the city’s busiest bike lanes and have consistently captured data from automated bike counters. Most Seattle bike lanes either lack counters or the counters have large gaps in data collection.

The ridership increase on Second Avenue was aided by an extension of protected bike lanes on a few blocks of South Main Street and Fifth Avenue South that feed into the route.

This summer, SDOT plans to install protected bike lanes on Ninth Avenue North between Denny Way and Harrison Street and a block of Bell Street just south of Denny. 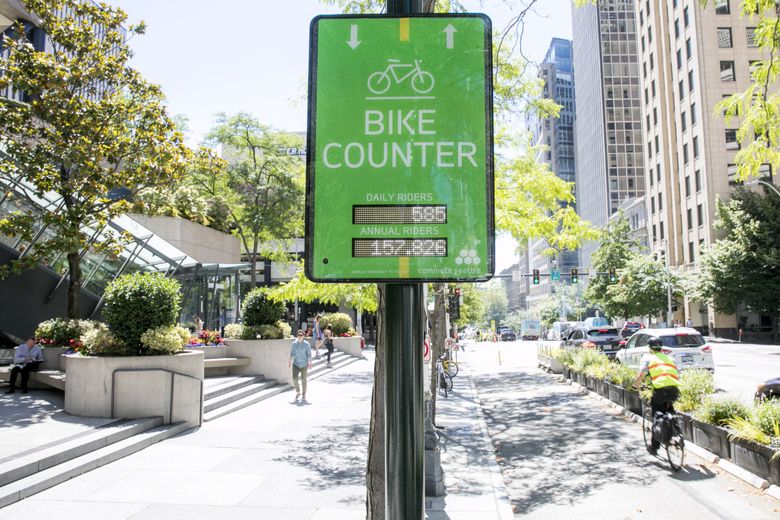 What we can learn from Seattle’s bike-counter data

“It doesn’t surprise me that we’ve seen a big increase in ridership downtown since that’s where the investment has been,” said Vicky Clarke, policy director for Cascade Bicycle Club.

It’s difficult to say definitively whether ridership on other bike lanes and paths throughout the city grew or declined last year.

Ridership data for many Seattle bike lanes sometimes have months-long gaps due to failed or vandalized counters, making comparisons across years difficult. Moreover, several bicycle lanes, like those on Roosevelt Way Northeast and Dexter Avenue North, have no counters at all.

About 370,000 bike trips were recorded last year along the Burke-Gilman Trail at Northeast 70th Street, where a bike counter is located. That’s fewer than in any year since 2014 — with the exception of 2018 when the counter didn’t work for three months during the summer, an analyst at SDOT said.

Traffic increased at a bike counter along Spokane Street near the West Seattle bridge, with slow bus commutes serving the neighborhood. Vandals stole copper wire used in the counter in November 2018 and the damage wasn’t repaired until January 2019, SDOT said.

Bob Anderton, an attorney at Washington Bike Law, who for years commuted downtown from South Park, said bicyclists traveling from West Seattle are likely undercounted as some riders take short cuts or use routes where no counters are located.

SDOT removed counters on the 39th Avenue Northeast Greenway because of vandalism and have no immediate plans to replace them.

The agency is looking to convert all counters to inductive loops — circles of magnetic wire buried under the surface that detect metal passing over them — to prevent vandalism or other damage.

In addition to automated counters, SDOT crews also conduct spot counts at 50 locations citywide during certain days in January, May and September. Data for the 2019 spot counts likely won’t be reported until December this year.

E-bikes on the rise

Part of the ridership bump likely can be explained by the growing popularity of electric-assist bikes, which give a power boost to riders, especially when pedaling uphill.

The bike-share e-bikes provide an “easy, low-barrier way to try them” before a rider decides to buy one, said Joel Miller, bike-share program manager at SDOT.

Mike Radenbaugh, the founder and CEO of Seattle-based Rad Power Bikes, said most of his customers rented an electric bike before buying one.

Between 2018 and 2019, the company’s e-bike sales more than doubled, Radenbaugh said.

Anecdotally, he said, the clientele is different from what he’s traditionally seen in Seattle. Customers include parents carrying their children, workers delivering food and older people getting back into bicycling.

“We’ve found once someone tries an electric bike, they want to integrate it in their daily life,” Radenbaugh said.

Lime announced last month it would remove its green rental bikes from Seattle streets until at least April as it waits for the city to approve a scooter-share program, expected this year. That leaves only Jump in the bike-share business for now.

It’s unclear what impact, if any, scooters would have on bicycle ridership.

“Let’s build a network that supports all of these complementary modes,” she said.

Correction: Due to incorrect data, a previous version of this story said bike traffic recorded by automated bike counters at the Elliott Bay Trail and at Spokane Street went down in 2019. In fact, bike traffic increased at both locations.