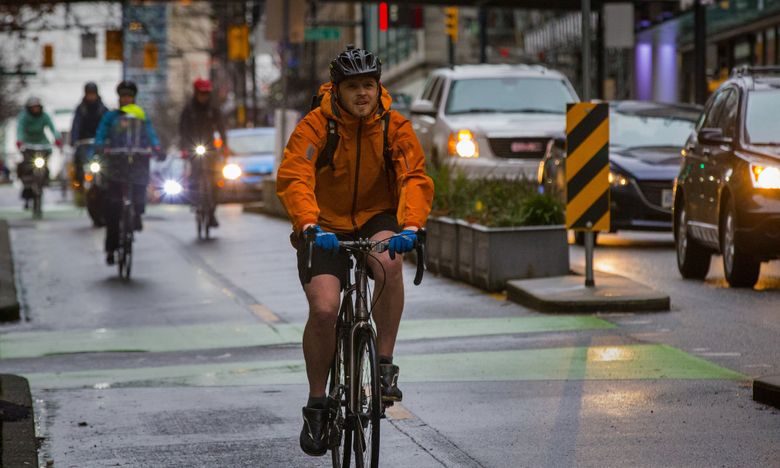 Bicyclists ride in a protected lane in Vancouver, B.C. More than 10 percent of commutes are now made by bicycle in Vancouver, an increase of 60 percent over 2013, according to city data. In Seattle, the share of bicycle commuters is stalled at around 3 percent. (Ellen M. Banner/The Seattle Times)

Seattle’s leaders are working to build a network of connected bike lanes, but every inch of pavement is contested and tensions run high. In Vancouver, which already has such a network, cycling numbers are up. Driving numbers are down. And the opposition has largely melted away.

In Seattle, every bike lane, whether it’s just a painted white line or a fully separated, landscaped bikeway, seems to be fought tooth and nail, in a never-ending battle over precious street space.

The city’s been trying to build one 1.4-mile stretch of bike path in Ballard for nearly three decades. A long-planned bike lane on Fourth Avenue has been pushed back to 2021.

Is this the future of Seattle transit? A look at Vancouver, B.C. — a city that figured it out years ago

North of the border, the battle has, if not disappeared, at least faded. Former foes have become allies. In less than a decade the city has stitched together a network of bike lanes, mostly separate from traffic, that lets cyclists navigate downtown and beyond without going shoulder-to-shoulder with cars.

Downtown Vancouver is peppered with interconnected bike infrastructure. Bike lanes aren’t painted or marked with pylons; they’re separated from traffic with planter boxes or other solid dividers. There are bright-green crossings, special bike traffic signals, turn restrictions for cars and all manner of textured pavement, sidewalk bulbs and signage.

Bike trips have steadily increased, while driving has decreased.

More than 10 percent of commutes are now made by bicycle in Vancouver, an increase of 60 percent over 2013, according to city data. In Seattle, the share of bike commuters is about 3 percent, and hasn’t budged in years.

The share of female cyclists has increased as well. On Hornby Street, one of Vancouver’s most prominent downtown bike routes, women are 39 percent of all cyclists, a 40 percent increase from before a protected bike lane was put on the street.

“A lot of North American cities, when we build a bikeway, we tend to build a one-off and then, because they’re not connected to anything, it’s not surprising that they don’t get used,” said Kay Teschke, a professor emeritus of public health at the University of British Columbia. “They just don’t make people feel comfortable.”

Seattle’s hills present a challenge that Vancouver bikers don’t have to grapple with. But with similar weather and a similar culture, the city is pushing forward — haltingly — hoping it can build a network of connected bike lanes as successful as Vancouver’s.

But they still remain, mostly, islands to themselves. They don’t connect to one another, and bikers still have to fight car traffic to get from one to the next.

“Vancouver is sort of like true north for us,” said Kelsey Mesher, former Puget Sound policy manager for the Cascade Bicycle Club. “They decided to invest politically and financially in a downtown bike network. … We’re almost there, but it’s not quite working like it is in Vancouver.”

As recently as nine years ago, not a single protected bike lane existed in downtown Vancouver.

Now, you can stand downtown at the corner of Hornby and Dunsmuir streets, in the heart of the city’s financial district, and bike for miles in almost any direction, physically separated from car traffic.

Vancouver built its first downtown separated bike lane in 1996, on the Burrard Street Bridge, one of three bridges that connect downtown to the rest of the city to the south.

It was an unmitigated disaster.

The lane, which was “built” with little more than traffic pylons, took away a lane of traffic and the city did little to let people know that it was happening.

A CBC television segment from the time sums up drivers’ reaction:

“This is stupid,” one man fumes. “You’ve got two cyclists and 9 million cars and they get a whole lane.”

“I think councilmen ought to be strung up,” said another.

“We opposed that,” said Charles Gauthier, president of the Downtown Vancouver Business Improvement Association, which represents 8,000 businesses. “We were concerned about congestion and increase in travel times.”

The bike lane was supposed to be a six-month trial. It was removed after a week.

The city tried again to build a bike lane on the bridge in 2005, but failed.

A new mayor, and a new majority on the City Council finally built a permanent bike lane on the bridge in 2009.

The opposition didn’t fade. But Mayor Gregor Robertson and his Vision Party were dead set on creating a more bike-friendly city.

They opened a protected bike lane on Dunsmuir Street, a major east-west thoroughfare, in 2010.

Then, just a couple months later, the city announced it would build yet another protected bike lane, this one on Hornby Street, which would connect the bridge bike lane with the one on Dunsmuir.

“They said, ‘You’ve already got one; why do you need another one?’ ” recalled Jeff Leigh, the Vancouver chair of HUB Cycling, the region’s largest cycling advocacy group.

The whole thing happened in the span of a couple months.

His group testified to the City Council, opposing the Hornby Street lane. They worried about the loss of on-street parking, turning restrictions and increased travel times.

They lost. But they did extract one concession: a city-funded study on the impacts of the new bike lanes.

The study showed modest impacts. Hornby Street carried the same number of cars each day both before and after the bike lane went in. Travel times increased by 30 seconds, mostly because of a traffic signal, timed for cyclists, at one intersection.

The number of cyclists on sidewalks decreased by 80 percent.

The proportion of female cyclists increased by 15 percent.

A survey of more than 100 businesses along the path of the new bike lanes found that they reported lost profits — an average of about $4,300 per business over the course of a year. But only four of those businesses were willing to provide documentation of the losses.

The city met with businesses to hear their concerns and made some tweaks — bigger loading zones, changes in traffic-light timing, improved signage.

And the opposition from businesses — at least those represented by the Business Improvement Association — largely melted away.

“The study came back, mitigation strategies were recommended, we said we can either decide to continue to fight this or just move on,” Gauthier said. “We made a decision that we were not going to be fighting this anymore, that we were going to set as a new goal that we wanted downtown to be accessible by all modes of transportation. That was a clear sea change.”

The decision was also influenced by the range of businesses downtown, and their varying needs.

For every shop complaining to Gauthier about lost on-street parking, a tenant in an office building was telling him about how their employees were biking to work.

The business association is now an active supporter of building more bike lanes. It gives $15,000 a year to HUB Cycling.

“It’s really made our downtown extremely user-friendly,” Gauthier said. “I think it gives us a competitive edge.”

More on the horizon

Crews have paved the Arbutus Greenway, a 5.5-mile bike path that connects the very southern edge of the city to downtown.

And in January, the City Council voted to add a bike lane to the Cambie Street Bridge, which serves downtown. The bridge already has wide, protected bike-walk paths in both directions, but they’re so trafficked that advocates pushed for another lane to separate bikers from walkers.

A City Council member opposed to the bike lane urged opponents to attend the council meeting to voice their opposition. Only three people showed up to speak. All supported the bike lane. A petition to block the bike lane has been active for months and garnered about 350 signatures.

“We’ve seen the results; we really believe that we strategically chose the right corridors to introduce, where people wanted to be able to bike,” said Dale Bracewell, the city’s manager of transportation planning. “The larger public discourse of just sort of loving to hate people cycling has gone away.”