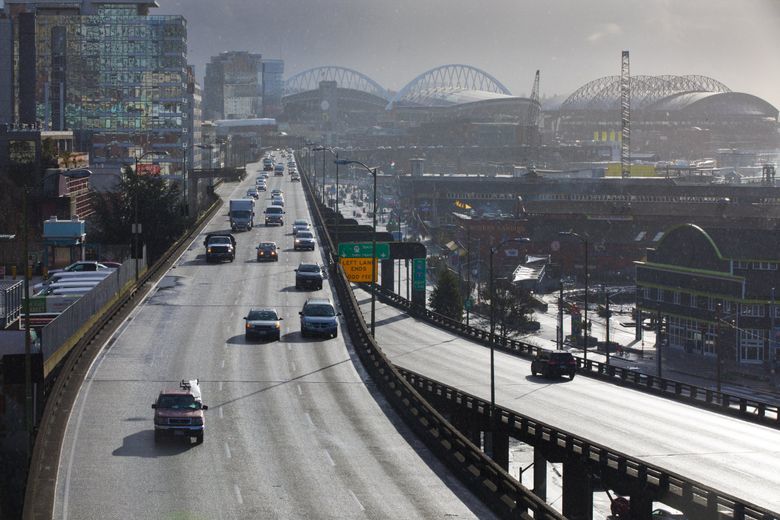 Traffic on the soon-to-be-demolished Alaskan Way Viaduct, photographed last month from Victor Steinbrueck Park. The viaduct will close permanently Jan. 11, and the tunnel’s big opening party is Feb. 2-3. After the tunnel opens, the viaduct will be demolished. (Ellen M. Banner / The Seattle Times)

For more than 60 years, drivers have skirted downtown on the Alaskan Way Viaduct while enjoying a scenic, waterfront view of Elliott Bay. But the elevated highway is about to be torn down, replaced by a tunnel. Here's a look back at its history.

For more than 60 years, drivers have skirted downtown while enjoying a scenic, waterfront view of Elliott Bay. But the elevated highway is vulnerable to collapse in an earthquake, so after years of debate, planning and construction, a new Highway 99 tunnel will open in its place.

We’ve reported on all the twists and turns that have led to this point.

Here’s a look back on that coverage.

Seattle streets grew more crowded after the turn of the century as cars ownership soared. City engineers, in response, began to look for a route drivers could use to bypass downtown.

In 1911, engineer Virgil Bogue created the first comprehensive plan for the Municipal Plans Commission. He recommended street widening and tunnels to create more space, but Seattle voters rejected his ideas in 1912.

Moving people and freight through Seattle remained a pressing issue. Water flowed daily under the wooden Railroad Avenue, which ran along the waterfront, causing the support columns to weaken and rot.

In 1934, Seattle raised enough money to build a seawall on the central waterfront, according to HistoryLink.org. Behind the seawall, which opened in 1936, the city paved a four-lane road and named it Alaskan Way as a nod to Alaska’s importance to Seattle’s economic development. The new road replaced Railroad Avenue.

Railroad owners and businesses on the waterfront despised the bypass street; they felt the additional traffic would harm shipping and increase the time it took to handle cargo.

Demand for traffic relief increased. The city’s Engineering Department conducted a traffic survey in 1937 and found that a north-south bypass on both sides of downtown would be the best solution.

The report recommended a viaduct for Alaskan Way because it would relieve congestion and separate passenger-car traffic from truck traffic between the docks.

Another traffic study of the Seattle area in 1945 to identify postwar improvements found that the two most popular types of trips were those beginning or ending in downtown Seattle and those that passed through the city.

With that information, the Traffic Division began planning for Seattle’s new expressways — the Alaskan Way Viaduct and the Seattle Freeway, known today as Interstate 5.

The city provided $1.5 million to build the viaduct. The state allocated more than $1.9 million, and the federal government agreed to contribute $1.5 million for the Battery Street to King Street portion of the project.

On Feb. 6, 1950, crews began working on the Alaskan Way Viaduct, to become the first bypass route around the downtown business district.

Mayor Allan Pomeroy opened the viaduct to traffic on April 4, 1953, in full pomp and pageantry. The viaduct was connected to the Battery Street Tunnel a year later. In 1959, a viaduct extension was completed through the area now known as Sodo.

The completed project included the tunnel under Battery Street, eight ramps, two underpasses and a southern at-grade roadway in addition to the elevated, double-deck highway.

In 1970, city Planning Commission member Peter Best mentioned that taking down the viaduct might be a good idea, according to Seattle Times archives. Seattle was beginning long-range planning for a waterfront park, and Best said tearing down the viaduct should not be excluded from the options when looking “far enough into the future.”

Earthquakes on the West Coast also fueled discussions about alternatives to the elevated highway. In April 1965 a 6.5 magnitude earthquake centered between Seattle and Tacoma caused widespread damage, including to numerous bridges.

The next year, Seattle City Councilmember John Miller explored the idea of tearing down the viaduct, asking City Engineer Robert Gulino to study the cost and feasibility of such a task.

He called the viaduct an “eyesore separating the central waterfront from the downtown business district,” according to Seattle Times archives.

By 1974, Miller teamed up with fellow City Councilmember Bruce Chapman to suggest removing the viaduct. Together, they said the new West Seattle Bridge would make the viaduct unnecessary.

In 1989, the Loma Prieta earthquake damaged the elevated Embarcadero Freeway in San Francisco and killed drivers on the Cypress Freeway in Oakland when the deck collapsed. Once again attention turned to Seattle’s elevated roadways.

John Stanton and Marc Eberhard of the University of Washington submitted recommendations to the state on improving the Alaskan Way Viaduct in 1995.

That same year, the Washington State Department of Transportation (WSDOT) asked the state Legislature for $500,000 to study “big picture” alternatives to the elevated highway.

Talk continued about renovating or demolishing the Alaskan Way Viaduct, but on Feb. 28, 2001, that talk became more urgent.

Even without the earthquake, the viaduct was nearing the end of its 50-year life span.

In 2004, WSDOT announced it had chosen a shallow, six-lane tunnel as the preferred way to replace the ailing viaduct. Initial estimates put the cost of a tunnel between $3.4 billion and $4.1 billion and the time to build between seven and nine years. The cost of rebuilding the viaduct was estimated at $2.7 billion to $3.1 billion, and construction would take eight years.

Supporters of a tunnel argued it would reduce noise pollution, reconnect downtown to the waterfront and open views of Elliott Bay — but it was the most expensive option.

Opposition to the tunnel was strong. People’s Waterfront Coalition, a group of planners and environmentalists, wanted to tear down the viaduct and increase public transit rather than replace the highway. Several organizations, led by Magnolia residents, formed to support the rebuild option.

“A billion-dollar request in this budget will be impossible,” U.S. Sen. Patty Murray said at the time.

State legislators in 2005 voted to boost the gas tax by 9.5 cents per gallon for transportation projects. About $2 billion would go to the viaduct project.

Pressure mounted at City Hall. “Do you want to be the responsible public official when the next earthquake hits and it collapses?” former Deputy Mayor Tim Ceis asked.

Meanwhile, cracks grew wider on the viaduct and it sank deeper in the soil, a total of six inches near Yesler Way. State officials assured the public there was no immediate safety risk.

Gov. Christine Gregoire planned to decide by November 2006 whether or not to replace the viaduct with a tunnel.

Before she did, 30 members of the state House Democratic caucus sent Gregoire a letter arguing the state should replace the viaduct with an elevated highway rather than a tunnel. Nickels, many Seattle City Council members, former Govs. Dan Evans and Gary Locke, and former U.S. Sen. Slade Gorton signed a letter urging Gregoire to reject a new elevated highway.

To help break the stalemate, Gregoire called in December 2006 for a public vote on the issue.

But the following month, she dismissed the idea of a tunnel and said the state would either replace the viaduct with another elevated highway or spend billions set aside for the project on a new Highway 520 bridge.

Gregoire then said she wanted to hear what voters thought, clarifying, “I will never, ever say that a vote of the people is a waste.”

Back at the drawing board, options widened to 10 and then narrowed back to two by December 2008: a surface and transit plan, and an elevated highway.

But through a combination of politics and a second look at technology, the tunnel option made a comeback. New technology suggested that a deep-bored tunnel could be cheaper than once thought. An adviser to Gregoire said such a tunnel was “probably the most viable option” — if the numbers penciled out.

“This is not just about replacing a road. This is about building a 21st-century city,” Gregoire said at the time.

In January 2009, Seattle, King County and the state agreed to build a tunnel. By then, the state had spent $325 million on preliminary engineering, outreach, environmental studies and land acquisition while sorting through options over the past eight years.

Removal of the most dangerous part of the viaduct began in 2011, with the demolition of the Sodo portion.

Another obstacle came in the summer of 2011 when a referendum over a city ordinance dealing with tunnel-related permits essentially became a citizen advisory vote about the project’s future. Mayor Mike McGinn, a longtime tunnel opponent, helped lead the anti-tunnel campaign early on.

More than 58 percent of voters showed support for the project, delivering a sharp defeat to McGinn.

After 10 years of debate, construction of the tunnel was set to begin.

Seattle made history in 2013 when the world’s largest tunnel-boring machine arrived from Osaka, Japan, after a three-week journey across the Pacific Ocean to begin digging under downtown Seattle.

Nicknamed Bertha after former Seattle Mayor Bertha Knight Landes, who served in the 1920s, the machine measured 57 feet, 4 inches in diameter and weighed more than 6,700 tons.

On Dec. 3, 2013, about four months into its 1.7-mile journey from Sodo to South Lake Union, the cutter head hit a steel pipe near South Main Street. Bertha began overheating and was shut down.

That was the beginning of a massive and costly repair effort that ultimately led to a two-year construction delay.

Eventually, a dispute board ruled that the state should have done more to warn STP about the pipe but didn’t specify whether the pipe actually caused catastrophic damage to the cutter drive.

Bertha, meanwhile, remained stranded deep underground. In October 2014, crews began excavating an 120-foot-deep pit to reach the giant drill and hoist its 2,000-ton cutting drive to the surface, where it could be repaired and strengthened.

In the process, workers uncovered a mysterious deposit of shells that officials determined were from settlers who worked shucking oysters.

After the repairs, the tunnel machine began digging again on Dec. 22, 2015.

More problems arose. The machine temporarily stopped after a barge used to haul soil from the tunneling tilted and damaged a Port of Seattle dock. Then a sinkhole formed.

Gov. Jay Inslee intervened and ordered STP to suspend drilling until the sinkhole was investigated. Digging restarted six weeks later after a review.

The cost of the Highway 99 project, including the removal of the Alaskan Way Viaduct and construction of a waterfront boulevard and connecting ramps, totals about $3.3 billion.

The final pieces of the tunnel-boring machine’s cutting head were removed in May 2017 and taken to a scrap-metal yard. A few pieces from the cutter were salvaged by the Port of Seattle, for future public display in a Port park or facility.

The final act of the multi-decade saga will begin Jan. 11 when the viaduct closes permanently to drivers. The new Highway 99 tunnel is expected to open the week of Feb. 4.

Tolls, which are expected to pay off about $200 million in construction debt and fund an account for long-term maintenance, won’t begin until sometime in mid-2019. The cost will vary by time of day, with a minimum of $1 during nights and weekends and up to $2.25 during peak hours.

The state says the tunnel would serve 97,400 vehicles per day if it were toll-free — exceeding the 91,000 vehicles that presently pass the viaduct’s busiest point above Yesler Way. But WSDOT estimates that 44,000 drivers will divert from the tunnel once tolls are charged.

Above the tunnel, the waterfront should be quieter, and a rebuilt surface Alaskan Way will feature a waterfront promenade that is 12 to 40 feet wide; trees, flowers and grasses; a bike trail; bus stops; and curbside parking, among other features.

Correction: A caption on a historic photo in this story incorrectly stated it was taken in 1953. In fact, the photo was taken in 1959 after the southern extension of the viaduct opened.