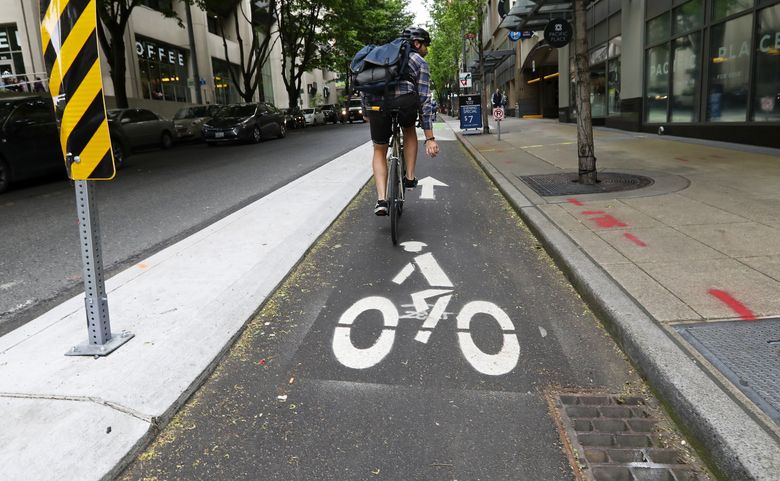 It’s not just the bike lane itself that costs money; signage, islands, drainage and more add up. A cyclist pedals between a storm drain and an island along the new Seventh Avenue bike lane on Thursday. The total came to $3.8 million for one-third of a mile there. (Ken Lambert / The Seattle Times)

At present rates, the Seattle Department of Transportation says it might be able to afford only half the 50 miles of bike lanes promised in the Move Seattle levy approved by voters in 2015.

Instead of a ribbon-cutting, Seattle officials called for a “soft launch” this month for a protected bike lane on Seventh Avenue. They didn’t celebrate an expanded bicycle lane through Belltown on Second Avenue, completed in February.

Photo-ops might bring attention to the startling $12 million-a-mile cost to build new downtown cycling routes, a ripe target for commuters bitter about traffic and growth.

At present rates, the Seattle Department of Transportation (SDOT) says it might be able to afford only half the 50 miles of bike lanes promised in the Move Seattle levy approved by voters in 2015.

“Clearly, SDOT needs to work much harder on value-engineering the costs of these projects down,” interim director Goran Sparrman said in a recent interview. “Second Avenue clearly is a far outlier. But we simply can’t afford those things.”

Why are they so expensive?

There’s more to a project than paving a bike lane.

It’s the other stuff — curbs, engineering, sidewalk retrofits, traffic control and especially drainage — that can break the budget.

Bicyclists using Second Avenue’s nearly 1-mile, two-way lane actually ride on old pavement, but new signals account for 40 percent of the $11 million spent, Sparrman said. All intersections were rewired for the new traffic lights and steel posts, including three that had none before.

Actually, the city didn’t promise downtown bike lanes for only $860,000 a mile. Nor did it overrun budgets by a factor of 14. That figure is an average that includes much cheaper locations.

“It’s a math equation,” said Helmbrecht, who earlier managed the Move Seattle campaign. “If you were to deliver 110 miles of commitments, you would have to see that number.”

City Councilmember Rob Johnson said the $860,000 figure looked reasonable based on what they heard from other cities, including Chicago.

Murray’s transportation director, Scott Kubly, who now works for the bike-share company LimeBike, declined to comment for this story.

Creating solid, bottom-up estimates for each corridor was “not practical for a levy,” she said. “I don’t think you get any reasonable certainty on cost, until you get to 30 percent design.”

The southbound bike lane on Seventh Avenue provides safe passage from the Amazon Spheres to the Washington State Convention Center.

A city engineer estimated construction at $1.5 million to $1.8 million; the low bid by Gary Merlino Construction was $2 million, including taxes.

A subcontractor installed the asphalt for $76,000, including 275 work hours at standard union wages, such as $46.50 per hour for laborers.

If you’re exiting the Met Tower apartments near Stewart Street to catch a taxi, you’ll cross a concrete sidewalk, the asphalt bikeway, and another sidewalk — all sandwiched together on the same level, atop a 4-inch-high curb. Walking is safe and vendors can deliver boxes, on wheeled dollies, to the wine shop and three restaurants.

Merlino project managers declined to comment, but a city spending chart shows the Seattle company fulfilled its contract without disputes or mistakes.

Engineering, surveying, public outreach and staff time added more than $1 million, bringing the total to $3.8 million, for one-third of a mile.

“I would criticize the cost as being too high,” Sparrman said.

But he defends the multimillion-dollar signals that tell drivers when to turn left, and when pedestrians and cyclists may proceed straight.

“Frankly, there was a specific safety problem at each of those intersections,” Sparrman said. “It’s really important to have those green arrows.”

He brought up the death of Sher Kung, an attorney and new mother killed by a left-turning box-truck driver at Second and University Street in 2014.

Two weeks later, SDOT opened a separated bike lane including that spot, for only $1.5 million, by simply moving the parking stalls and changing traffic signals on old corner posts. But confused drivers ran red arrows, while a few bikes and cars collided at driveways.

But for its 2018 Belltown extension, the city delivered full facilities from day one.

“Any estimator would add multipliers to account for all of this,” an SDOT project manager said in a recent email provided by the agency. Even in 2014, colleagues understood that if Second were outfitted with new signals, the project could hit $11 million, the manager recalled.

“The construction, I would say, was lengthy but worth every penny,” said Andrew Koved, a cycle commuter who stopped by an SDOT doughnut giveaway there May 10. “It’s much less dangerous now.”

Swerving taxis and cars are no longer a constant threat, he said, because people can now exit vehicles onto concrete islands.

Vehicle collisions have decreased from 4.6 per month to 2.5 per month, city data say, and no bike-involved crashes have been reported.

The winning Second Avenue bid was $5.2 million, by KC Equipment, followed by $1.3 million in change orders. Nearly half the $11 million went into planning or other soft costs.

The city has hired a consultant to investigate.

“A million things can happen”

SDOT project development director Darby Watson apologized for not airing the higher costs sooner, though she didn’t join the agency until 2016, after those pie-in-the-sky campaign promises.

“I mistakenly thought we could address that, and make these projects come in for the $860,000 or thereabouts, and I was wrong,” she told a volunteer bike-advisory board earlier this month. “Looking back, I personally should have been more critical about those.”

She devised simpler designs for short bike lanes last fall on Pike and Pine streets downtown, for $350,000 each. Those rely on plastic posts and planter boxes, “something we’ve borrowed from Vancouver,” Sparrman said.

In future projects, he would avoid designs that require changing stormwater flows.

“Drainage is really expensive,” he said. SDOT should try to save money by allowing stormwater to flow across a bike lane into existing drains, he said.

New drains and basins on Seventh Avenue cost $162,000 plus engineering, but the Second Avenue project has gaps between pedestrian islands, where runoff trickles into existing drains.

Bike lanes should become cheaper with experience, and work in neighborhoods outside downtown will cost less, she said.

Two years ago, a 1.7-mile Roosevelt Way bike lane was delivered for $590,000, by combining that work with a simultaneous $9 million street rebuild, SDOT said.

Second Avenue’s high costs are one reason Sparrman postponed a similar Fourth Avenue bike lane until 2021, he said. But his main worry was losing “resiliency” for gridlocked buses and cars, until light-rail capacity increases.

Instead, he proposes to accelerate Pike-Pine bikeway extensions, from Sixth Avenue across Interstate 5 onto Capitol Hill.

Those lanes should open next year — despite a rivalry for space, when construction trucks frequent the Washington State Convention Center expansion project.

“Bus layovers and construction loading needs have to be second priority, compared to completing the safe bicycle system,” Sparrman said.

SDOT has $10 million to spend from the convention project’s “community benefits” fund, to build bicycling paths on Pike-Pine.