Bowing to criticism about its hiring process, the Washington State Patrol has temporarily replaced its longtime staff psychologist with an outside contractor to screen trooper candidates.

The switch comes about a month after a Seattle Times and public radio Northwest News Network investigation documented years of red flags around the agency’s psychological evaluations, including recent evidence they may disproportionately reject applicants of color. 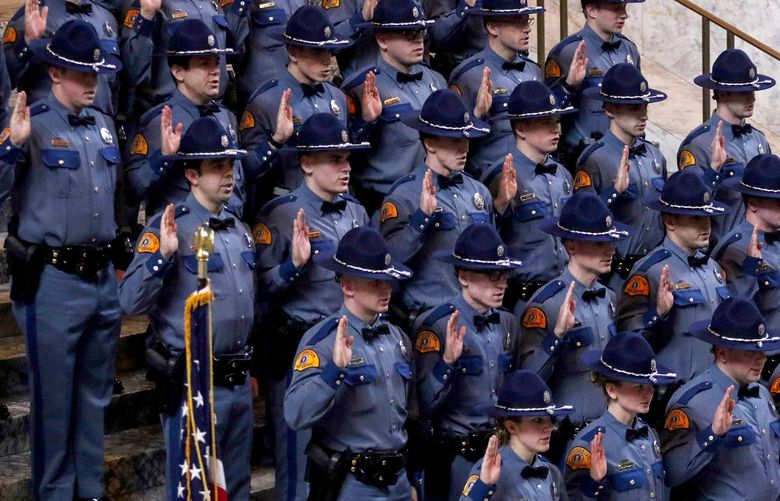 Chief John Batiste had previously resisted calls for outsourcing the evaluations, despite repeated concerns raised about the methods of the WSP’s staff psychologist for the last 27 years, Daniel Clark. But in recent weeks Gov. Jay Inslee and key legislators applied pressure to make changes towards diversifying the WSP.

The new contractor brings the WSP in line with common psychological screening practices, but that change alone can’t diversify the force. As of last year, WSP troopers were 87% white and 90% male — percentages that haven’t budged in the last two decades even as the state has become much more diverse, and the WSP itself tried to recruit more candidates of color.

The psychological screenings conducted by Clark are a late, key step in a long hiring process. After a rejection from Clark, candidates were almost never hired.

“Something that’s been in place this long, and is this systemic, doesn’t change easy,” said Rep. Bill Ramos, D-Issaquah. “We’re just trying to pick apart every piece we can to address the systemic problems.”

In recent weeks, legislators pressed Inslee for action. A group of lawmakers requested a video call with Inslee after the Times story ran, Ramos said. They included members of the House and Senate transportation committees, which oversee the WSP, and some from the Legislature’s Members of Color Caucuses.

“It’s been the work we’ve been doing for a number of years, but this finally just put it out on the table for everybody to see.” Ramos said. “We basically went in and said, ‘Here, look, have you read this article? Are you aware of what’s happening?’ ”

Inslee, who can appoint and fire the WSP chief, relayed the concerns to Batiste, the governor’s spokesperson said. Inslee “urged the Patrol to do better and explore other options for the hiring process,” Tara Lee, the spokesperson, said in an email. Batiste has been chief since 2005.

The WSP signed a contract with Lynnwood-based Public Safety Psychological Services that began on Oct. 26 and lasts through June 2022. Clark finished his previously scheduled exams last week, and the new company took over Monday, a WSP spokesperson said.

Meanwhile, the WSP is hiring an outside auditor to evaluate the psychological screenings, a process that is expected to take three to six months. The agency is “waiting for results of the audit before making long term decisions,” Capt. Neil Weaver said. Clark remains on the payroll and will continue to perform other duties besides evaluations.

Clark did not reply to an interview request for this story. Previously, he defended his process and blamed any racial imbalance on the national written tests he administers.

“I treat everybody as an individual and make my recommendations based on an individual assessment,” Clark said. “Psychologically, I don’t believe that there is bias.”

Consultants and internal critics have highlighted Clark’s high rejection rate and questioned his approach for years. In 2015, the WSP head of human resources questioned Clark’s methods, including the uncommon practice of rejecting candidates based on their written tests alone, but he was rebuffed by both Clark and Batiste.

A 2016 legislative report determined that the psychological stage was failing WSP candidates who were later hired at local departments, while the agency was struggling to recruit and retain troopers. The authors recommended outsourcing some or all of the psychological screenings, but the agency didn’t act.

Earlier this year, the multinational consulting firm Deloitte found that minorities in a recent group of applicants failed at significantly higher rates than their white counterparts.

Internal data reviewed by The Seattle Times and Northwest News Network shows the psychological screening rejected 20% of white candidates over the four years ending in January. In contrast, 33% of Black candidates, 35% of Hispanic candidates and 41% of Asian candidates were not recommended for a job, according to the data.

“Every focus group and multiple key executives reported concerns of bias in the psychological evaluation process and recommended a review of the process,” the Deloitte consultants wrote.

“Without diversification of evaluators, there is not a system in place for appeals or second opinions. This could be a contributing factor to the high rates of failure for all applicants, and especially applicants of color,” the consultants said.

Again, the consultants recommended hiring a new psychologist, but Batiste resisted —until now.

The agency is already scheduling evaluations with Public Safety Psychological Services, a spokesperson said, as the WSP hopes to hire 60 cadets by February. The WSP signed a sole-source contract to conduct psychological evaluations, but the work may be opened up to bidding depending on the results of the audit, Weaver said. Previously, the company worked with the WSP on other projects.

Public Safety Psychological Services has seven psychologists licensed in Washington, said Cerise Vablais, one of the owners of the company. It serves more than 200 public safety agencies in the Pacific Northwest, including the Seattle Police Department, the Bellevue Police Department and the Pierce County Sheriff’s Department.

“We’re really committed to keeping our practice evolving as the culture of policing evolves,” Vablais said.

The company’s process differs from Clark’s in a few key ways. It doesn’t reject candidates based on their written tests alone — something Clark did in certain cases. WSP data shows those rejections disproportionately impacted candidates of color.

Also, the firm uses an A-F grading scale, instead of three categories that Clark used: “recommend,” “not recommend” or “marginal.” One of the criticisms of Clark was that he wielded an inordinate amount of power late in the hiring process, and his rejections were nearly impossible to overcome.

Tips are the lifeblood of investigative reporting. Good tips are clear, specific, have documents or evidence to back them up and involve a problem with real-world consequences. We accept tips by several methods, including through secure encrypted email, text and phone calls, as well as mail, so a reporter can follow up with you.
Mike Reicher: mreicher@seattletimes.com; on Twitter: @mreicher. Mike Reicher is an investigative reporter at The Seattle Times.
Austin Jenkins
View Comments
Posting comments is now limited to subscribers only. View subscription offers here. For more information, visit our FAQ's.