The Bolt Creek Fire had been growing for less than three hours Saturday morning when homes along Highway 2 from Baring to Grotto lost power. A tree fell onto a power line operated by Puget Sound Energy, darkening 343 homes, and acting as a harbinger for the weekend ahead.

A small fire reported around 5 a.m. Saturday grew from 20 acres to 7,600 acres that day. By 2 p.m,. PSE elected to cut power to another 416 homes surrounding Skykomish.

It was a notable decision for the utility. For years, PSE has said preemptive power shut-offs were unlikely to be necessary for most of its service area in Western Washington and has declined plan for them. The company says just 1% — or 100 miles — of its territory is considered to be at high risk for wildfires.

Because Washington state has few regulations for utilities’ wildfire safety — unlike California and Oregon — PSE was not required to plan for how it would handle a dangerous weather or wildfire event that required it to preemptively shut off power.

Deliberate power shut-offs are intended to prevent utility-caused disasters under extreme weather and heat and are increasingly considered the industry standard. Failing to shut off power amid drought and high winds has led to some of the West Coast’s most devastating burns, including California’s Camp Fire in 2018, which killed 86 people in the town of Paradise.

In January, a Seattle Times investigation found Washington has few mechanisms to enforce whether its three investor-owned utilities — Avista, PacifiCorp and PSE — are operating safely enough to prevent wildfire hazards. State regulators don’t have the power to impose fines if there are hazards, and they aren’t required to inspect power lines for fire risk. Nor are utility companies required to report to the state a fire caused by power lines unless it results in serious injury or death. 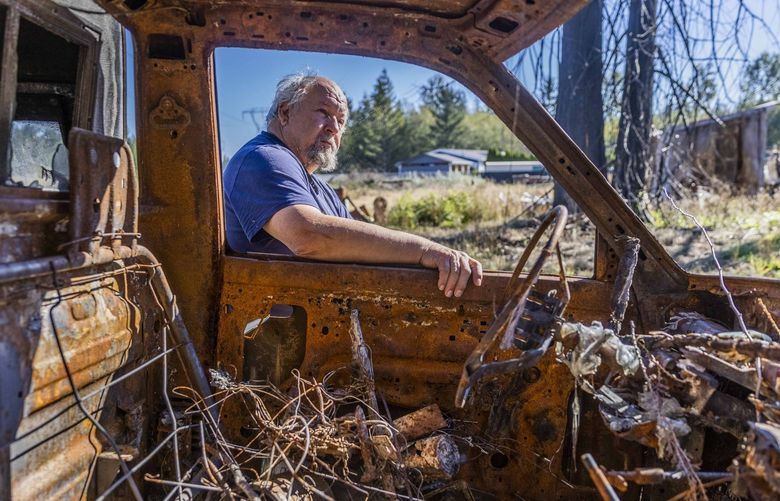 Who pays when power lines burn down homes? Not Washington’s utility companies

While Oregon and California have passed laws and strong guidelines on plans to cut power, Washington has lagged behind. Only last summer did the state Utilities and Transportation Commission ask utilities to submit wildfire mitigation plans, but it did not create a formal standard to measure the efficacy of the plans.

This slow adaptation may now leave utilities such as PSE and Avista in Eastern Washington, which also doesn’t have a preemptive power shut-off plan, playing catch-up to nature. Climate change has already created a more intense and severe fire landscape, and scientists anticipate more serious wildfires closer to homes, even in Western Washington, like this past weekend’s Bolt Creek fire. Both conditions were once considered extremely unlikely.

Some utilities in the state already have plans to shut off power in extreme weather conditions. The Bonneville Power Administration and the Snohomish Public Utility District both have power shut-off plans for their lines under dangerous conditions.

On Sunday morning, power was shut off for 335 homes and businesses by the Snohomish Public Utility District. Many are the same homes residents are being urged to evacuate, the utility said. In addition, Bonneville cut power to three of its high-voltage transmission lines.

Virginia Held, 56, and her husband left their cabin at 10 p.m. Saturday night after seeing black clouds cracking through the mountain ridges, blowing debris in hot gusts of wind, distinct from the gray smoke that had settled like fog over their neighborhood. They packed up camping gear, important papers, and their 11 chickens. Sunday morning, the couple drove back to check on their house, and, finding it intact, turned on the coffee pot. Minutes later, their power was shut off. The Snohomish PUD had flipped the switch.

“Fires just aren’t common in this area. It is frightening not knowing if you will have a home to come back to,” she said. “Highway 2, it is almost like a rainforest, but it just dries out so much in the summer now, and people over here maybe aren’t quite so careful.”

People who stay in their homes without power, however, can face life-threatening complexities, like lack of access to refrigeration, crucial medical devices, and fans or air conditioners amid soaring heat. It’s an argument PSE has made for slow-walking their own power shut-off plan.

Both Bonneville and Snohomish said their outages Sunday were requested by county emergency officials to protect firefighters from the risk of electrocution as first responders attempt to save structures and quell the fire. As of Sunday afternoon, each said, they don’t plan to undertake any additional power shut-offs unilaterally but will continue to de-energize lines as needed.

In an email, Andrew Padula, a spokesperson for PSE, said the company will continue to monitor weather conditions to determine whether additional outages are necessary. Asked about how the utility was addressing medically sensitive customers, he said, “Our teams make extra efforts to contact these customers in a planned outage. We also have sent emails and made calls to customers in the impacted areas.”

Still, how Puget Sound identifies which areas are at risk was among the key hurdles it self-identified in planning for power shut-off and better wildfire prevention.

The company “does not currently have the data and information, nor the necessary tools to effectively implement [public safety power shut-offs] at this time,” Jon Piliaris, director of regulatory affairs for PSE, said in a July 2021 letter to the Washington Utilities and Transportation Commission.

“The lack of robust tools and data available to PSE compared to the dynamic risk model tools used in California is not something that can be addressed prior to the 2021 Fire Season and not likely to be addressed for several years or longer,” he said, adding that a viable funding source to fix this had yet to be identified.

In contrast, California has spent millions of dollars in this type of investment, he said.

If PSE had a preemptive power shut-off plan, it would require the company to tell regulators how it identifies conditions that would trigger a shut-off, as well as how it would notify and prepare customers, first responders, and other key agencies.

In April, Puget Sound shifted gears, and said it would begin to develop such a plan by conducting a series of community events to hear how best it could inform residents and local officials of power shut-offs. Over the summer meetings were held in Ronald and Roslyn in Kittitas County and Greenwater, Pierce County, with another planned for Cle Elum in October.

The fire that began in Skykomish on Saturday didn’t wait for PSE to make a plan.