Advocates and personnel within the department had raised concerns about these issues for months. In the wake of the story, advocates said they felt “gaslit” by public officials’ responses when they assured them they stood with survivors of sexual assault.

Harrell rejected the idea that his administration did not prioritize justice for sexual assault survivors. But he acknowledged that the current state of the unit – and its backlog of 48 stalled cases that had not yet been investigated – was “not where it needs to be.”

“I’m not happy with where the city is, but we will indeed make sure that we are providing optimal service, both for investigation and victim survivor support here this year,” Harrell said. 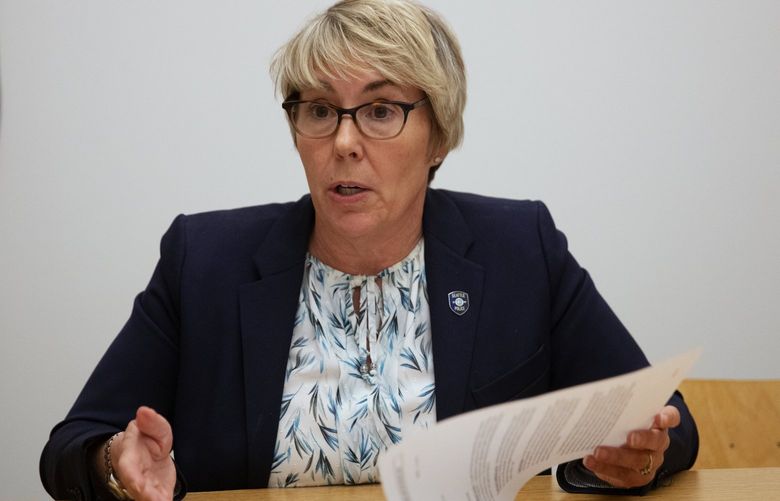 Harrell suggested bringing back retired detectives to investigate sex offenses, but said he was limited by labor agreements. He also committed to a “sit down” with advocates in response to these concerns in coming weeks.

Ultimately, Harrell said, he needed to increase staffing across the department.

Advocates have questioned whether the root cause was staffing, or the department and city leaders’ priorities.

Riddhi Mukhopadhyay, executive director of Seattle nonprofit Sexual Violence Law Center, said advocates were “excited” to see the memo “because it confirms what we’ve all been seeing.”

“Now we are being gaslit,” Mukhopadhyay said of the response from political leaders. “[The Seattle police department’s] response has always been kind of slow and not as timely compared to other jurisdictions. But it’s gotten worse.”

The SPD memo published by The Times/KUOW was written by the Seattle police sexual assault and child abuse unit’s Sgt. Pamela St. John to interim chief Adrian Diaz this April. It explained that the unit was so understaffed it had a backlog of stalled sexual assault cases.

Where the sexual assault and child abuse unit had once been staffed with 10 to 12 detectives, just four detectives remained in the unit earlier this year.

The unit has since added an additional detective and plans to add another this month, but the understaffing continues to result in fewer referrals to prosecutors and can harm cases, prosecutors and advocates said.

Have you reported a sexual assault to the Seattle Police Department within the last six months? We’d like to hear from you. Get in touch with reporters Sydney Brownstone (sbrownstone@seattletimes.com, 206-464-3225) or Ashley Hiruko (hiruko@kuow.org, 206-574-8007).

He cited a decrease in the number of sexual assaults reported to Seattle police over the last two years and emphasized a “massive stress level on all of our units” because the department’s overall number of sworn officers in service plunged from 1,290 officers in 2020 to 968 as of March.

“We are trying to work through every case that comes to us, but some cases take a little bit longer for us to get to,” said Diaz.

Seattle City Council public safety and human services committee chair Lisa Herbold said in an interview Thursday she planned to ask Diaz how he believed the department could move toward investigating all sexual assault cases when many sexual assault reports had historically not been investigated.

Herbold said she agreed with Diaz’s explanation that departmentwide understaffing was at the root of problems plaguing the sexual assault unit. She also defended the council’s discussion of reducing police funding in the wake of the 2020 protests, saying that police departments across the country have now experienced similar labor shortages during the pandemic.

“This is why we’re looking for ways to support the department in meeting its hiring goals,” Herbold said.

Washington’s U.S. Sen. Patty Murray, who has championed efforts in Congress to expand sexual assault survivors’ access to rape kits and sexual assault nurses, said in an emailed statement to the Times/KUOW it is “unacceptable for any survivor not to have their case investigated and pursued.”

“No one should ever have to bring their story to the police only to discover that their assault will go uninvestigated and unheard by law enforcement — survivors deserve justice,” she said.

Assistant Chief Deanna Nollette said in an interview last week that staffing shortages have been felt throughout the police department, but data provided to the Seattle City Council shows that among an overall staff decline, the proportion of officers in some units – including patrol and management – increased as the portion in investigative units decreased.

In the interview Thursday evening, Harrell said his focus on the stalled investigations was “not a result of external pressure or anything else. It is just the right thing to do.”