Women who say they were abused and sexually assaulted by a Seattle hip-hop artist will have to wait to learn whether the Seattle Police Department can be held liable for its handling of an alleged multistate sex trafficking scheme.

King County Superior Court Judge Melinda Young declined to rule at a Friday hearing on the city of Seattle’s motion to dismiss the case, saying she would issue her decision within three weeks.

The city of Seattle and the Police Department last month were added as defendants in the case. The women allege in the suit that the department’s “negligent investigation” of their claims caused more people to be harmed and that the city failed to adequately oversee the department.

Young’s ruling will hinge on the question of whether Washington law permits government agencies to be sued for mismanaging criminal investigations and whether the Police Department is even a legal entity that can be sued. The city says it is not. 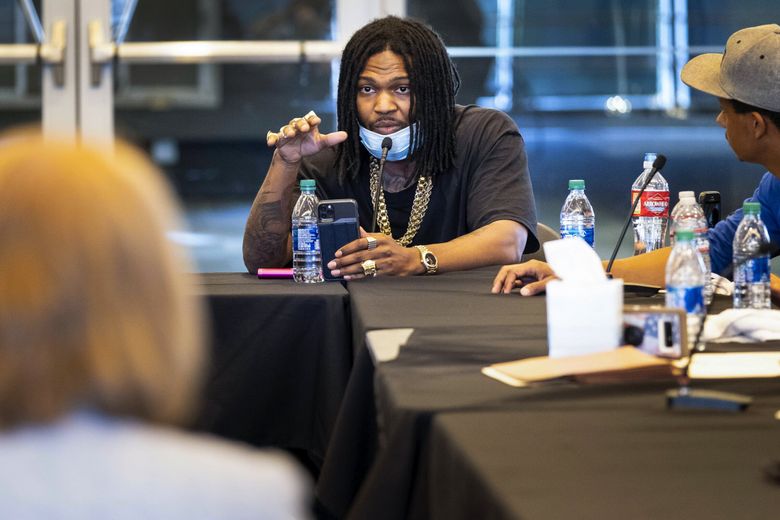 In the lawsuit filed by five women in 2021, four allege that they were forced into stripping or sex work, raped, and at times confined in sleeping pods by musician Solomon “Raz” Simone. The suit names associates of Simone and his recording label, Black Umbrella, and alleges that Simone conspired to “ensnare, imprison and exploit” women for profit. Talents Northwest, which owns Pandora’s and other strip clubs, where the women say a lax environment enabled a “legal brothel,” is also a defendant in the complaint.

Joe Walker, the owner of Talents Northwest, declined to comment on the case.

Simone, who gained prominence touring with Macklemore and as a self-appointed leader of the Capitol Hill Occupied Protest, also declined to comment.

During Friday’s hearing, an attorney for the plaintiffs indicated Simone also intends to file a motion to dismiss the complaint.

Paul Beattie, an attorney for Simone, told The Seattle Times and KUOW last week by email that neither he nor his client would discuss the case, adding, “At this point, these are essentially only allegations — not proven facts.”

Since at least 2017, interviews and records including police case files, emails and texts show that eight people — six women and the parents of two women — told police that women have been sexually abused and exploited for profit by Simone against their will. But despite assurance from a lead detective that he was investigating claims, and had opened a case, the allegations languished. Only after one of the women came forward with similar claims in late 2020, and KUOW reported on allegations against Simone, did police bring a case to county prosecutors.

Seattle police ultimately did not recommend filing charges against Simone, and county prosecutors agreed with that assessment earlier this year, citing insufficient evidence.

Judge Young indicated she was particularly interested in whether the first women who reported alleged crimes to police in 2017 were further harmed by the department’s decision not to file charges, or if it was others who were allegedly harmed in the intervening years.

After the police department declined to bring criminal charges, the women filed a civil suit. The FBI is also investigating the case but has not taken any action.

While it is rare to hear serious criminal allegations aired in a civil courtroom, women nationwide have been turning to the civil system as a means for alternative accountability.

Civil suits were brought against musician R. Kelly by people who said he abused them. Criminal charges followed and he was convicted last month. Earlier this year, gymnasts assaulted by doctor Larry Nassar filed suit against the FBI for allegedly mishandling their case and complaints dating back to 2015.

But whether the police department and their detectives properly investigated sex trafficking allegations is irrelevant, attorneys for the city say.

“Even if [what the] plaintiff alleges is true, the law does not provide a remedy,” the city wrote in its motion to dismiss.

The plaintiffs, however, stated in their lawsuit that the city “had a duty to completely investigate” credible allegations and “a duty to foreseeable victims.”

“As a matter of law, the City does not owe such duties,” the motion states.

Under the state’s definition of the public duty doctrine, government entities are shielded from legal action for doing publicly mandated work. Dallas LePierre said Friday there are no exemptions that could implicate the police department in this case, because no explicit legislative mandate compels the department to help the women, nor are they considered a protected class. Also, the department itself cannot be sued because it is not an independent legal entity, the motion states.

LePierre, an attorney for the city, said there could be a “chilling effect” to police work if “anytime a police department fails to arrest an individual fast enough after report of a crime” it opens them up to liability.

However, Ellery Johannessen, an attorney for the women, said the public duty doctrine was intended to be a guidepost for litigation, not a catchall immunity.

He said the city and Seattle police’s failure to properly investigate the women’s claims in 2017 “further emboldened Simone” and led him to commit heightened violence against the women, according to the suit.

Whether the police department should bear liability in the civil case against Simone is a question that cannot be resolved without the evidence that would be brought to light in a full trial, Johannessen said.

The trial date is tentatively scheduled for November 2023.

If you have experienced sexual assault and need support, you can call the 24-hour National Sexual Assault Telephone Hotline at 800-656-HOPE (800-656-4673). There is also an online chat option. Survivors in King County can call the King County Sexual Assault Resource Center’s 24-hour Resource Line at 888-99-VOICE (888-998-6423) or visit www.kcsarc.org/gethelp.
Rebecca Moss: rmoss@seattletimes.com; on Twitter: @rebeccakmoss. Rebecca Moss is an investigative reporter at The Seattle Times.
Ashley Hiruko: 206-574-8007 or hiruko@kuow.org;
Advertising