The workforce that built the U.S. nuclear arsenal, thousands of them already sickened or killed by workplace hazards, has been delivered two frustrating blows by the federal government.

At least 937 nuclear workers nationwide — including some from Washington’s Hanford nuclear reservation — seeking federal benefits for conditions resulting from their work are facing yearlong waits, as the National Institute for Occupational Safety and Health wrestles with cyber vulnerabilities even as new benefits applications stack up.

Adding to the workers’ woes, President Joe Biden’s administration on Tuesday announced it plans to continue a Trump-era legal challenge to a Washington state law that makes it easier for sick workers to access benefits. Advocates for sick nuclear workers have characterized the collision of disappointments as “callous” and “cruel.”

Advocates for sickened workers said the abrupt pause in processing benefit applications at NIOSH has caused a prolonged delay, likely preventing claimants with cancer from getting medical care and financial assistance.

“When you have cancer, you don’t have a year to wait,” said Terrie Barrie, of Colorado, a founding member of the Alliance for Nuclear Worker Advocacy Groups.

In May, NIOSH announced an unexpected pause in the processing of new claims for the Energy Employees Occupational Illness Compensation Program, which Congress passed in recognition that thousands of Department of Energy employees and contractors experienced illnesses associated with workplace exposures to radioactive materials and other toxins. It offers medical care and up to $250,000 in financial support to eligible workers or their heirs.

The specific benefits program that’s affected by the delay has paid some 4,971 claimants in Washington — home to Hanford and Pacific Northwest National Laboratory, both of which contributed to developing nuclear weapons — more than $660 million dollars to date, according to the U.S. Department of Labor.

Due to the frequency of cyberattacks targeting government computer systems, NIOSH earlier this year conducted a checkup on its cyberdefenses and determined they were inadequate, prompting what was initially announced as a two- to four-month pause in benefits processing.

But on Sept. 3, NIOSH quietly announced on its website that delays could last until the end of June 2022 — a 13-month delay. Computer system upgrades were taking longer than initially hoped, the Centers for Disease Control and Prevention reported.

Meanwhile, Barrie said, workers eligible for benefits will be forced to pay out of pocket if they can, or rely on private insurance, which doesn’t always guarantee the same access to the specialists or medications offered by the federal benefits program.

“It’s been terribly mismanaged, this whole thing,” Barrie said, noting the consequences land squarely on nuclear workers who sacrificed their health for national security. “Their care is being delayed.”

The federal occupational safety agency contends the pause is necessary to protect claimants’ private information from being plucked by hackers. Especially at risk are records known as dose reconstructions — calculations that determine the cumulative exposure to radiation someone absorbed on the job based on historical records — which are essential in determining whether workplace exposure is primarily responsible for their health problems.

Faye Vlieger, a volunteer advocate in Kennewick who helps sick nuclear workers pursue claims, called the delay and the lack of information from NIOSH about what’s driving it “very cavalier, callous and uncaring. It says, ‘We don’t care about your situation.’ “

Hanford, just outside Richland, sprawls across a dusty area twice the size of Chicago. It was born in secrecy during the Manhattan Project, producing the plutonium for the earliest U.S. nuclear bombs, a mission it continued for another 40 years. The soil is permeated with radioactive and toxic hazards that are now part of a costly and slow-moving federal cleanup.

Groups of workers also can petition for collective admission to the federal benefits program if they were present during a known mass workplace exposure. That’s the case with more than 500 decontamination workers from Hanford who — as reported in a Seattle Times investigation last year — were provided leaky respirators by contractor CH2M-Hill. 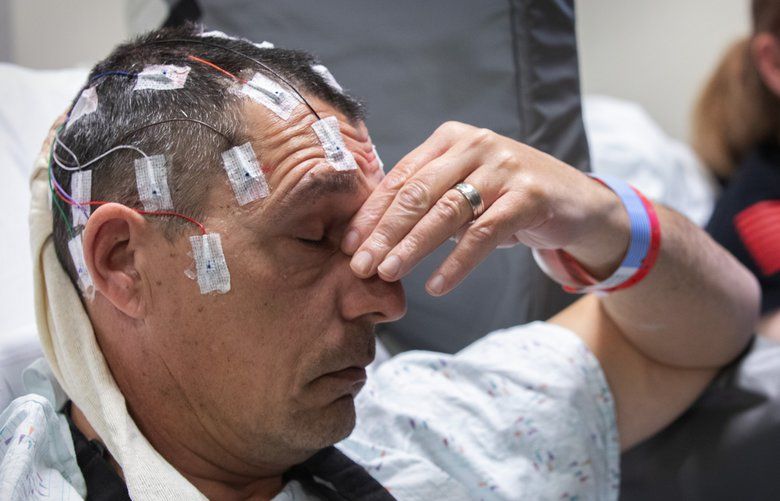 Currently, they’re trapped in processing purgatory, as are cohorts of workers subjected to radiation exposures in Tennessee and Ohio who want in.

NIOSH has made special provisions to keep processing applications from claimants who’ve been diagnosed with terminal conditions likely tied to their jobs. In those special cases, radiation doses are being calculated with pencil and paper.

But that painstakingly slow process cut the average number of completed dose reconstructions each week by 80 to 90 percent — finishing just 5 to 10 a week, when 50 was standard before the interruption, the program’s director told advocates in a letter.

Bert Kelly, a spokesman for the Centers for Disease Control and Prevention, parent agency to NIOSH, said in an email that the agency “recognizes the hardship” that delays placed on claimants and their families, and it is “working diligently” to resolve them, including reassigning staff and making adjustments to expedite claims from applicants who’ve been diagnosed with terminal conditions.

Barrie sent a letter last week to leaders of the U.S. Senate Committee on Health, Education, Labor and Pensions seeking help with the NIOSH delays that are expected to stretch into next summer.

“This is as appalling as it is unacceptable,” Barrie wrote to the committee’s chair, Sen. Patty Murray, D-Wash., and others. “People’s lives and health are at stake. NIOSH expresses no concern for the claimants they serve nor were they honest with the stakeholders” about the length of the disruption.

Murray, in an email to The Seattle Times, said she and her staff are pressing NIOSH to finish its cybersecurity modernization “as soon as possible so that workers aren’t the ones left suffering because of some bureaucratic process.”

“This is a challenging situation, but it’s something I am monitoring closely — supporting workers, especially our workers at Hanford who are struggling with on-the-job illness, is a top priority for me.”

The separate legal action by the Biden administration announced Tuesday involves a federal court ruling that struck down the Trump administration’s challenge to a 2018 state law that provides a presumption of eligibility for federal benefits. The law relieved Hanford workers of the requirement to show the exact chemical or toxin they may have been exposed to on the job.

The U.S. Department of Justice under Trump challenged its constitutionality in 2019 on grounds that federal jurisdiction over such matters supersedes state law, and Biden’s DOJ said it would continue to challenge the law.

“It is heart-breaking that the Biden Administration is continuing the Trump Administration assault on this law, which is providing much-needed compensation and medical care to workers sickened from exposure to Hanford’s deadly toxins,” said Tom Carpenter, head of the nonprofit Hanford Challenge, which watchdogs the cleanup.

Vlieger, the advocate in Kennewick, has helped nuclear workers throughout the Pacific Northwest navigate the benefits bureaucracy that she, as past worker at Hanford who endured hazardous chemical exposure, has also traversed.

The claimants she’s assisting are mostly from the generation that fought in World War II and Korea, and they haven’t complained much about delays. But they’re new to the program, have fresh diagnoses and, according to Vlieger, don’t fully grasp how troublesome the delays will become as the months pass and their health worsens.

They’ll likely face high deductibles from private insurers, she said, and might not have easy access to specialists or medications that the federal benefits provide.

“We’re advising clients to follow through with their medical care, then we can go back later and apply to get all those costs reimbursed to them,” Vlieger said. “But that’s pie in the sky. It’s not guaranteed.”

As much as filling out paperwork and chasing necessary records to assure eligible claimants get benefits, a new duty for volunteers like Vlieger has sprouted from the delays. “I give a lot of pep talks these days,” she said, her voice cracking as she fought back tears. “I tell them, ‘Don’t give up hope,’ that none of us advocates will stop fighting. I swear to them I’m not going to give up.”

The Seattle Times investigative team wants to pull back the curtain and make our team’s work clearer, from how we decide which stories to pursue to how we get records from public agencies. We’ve answered some questions in a FAQ and we want to answer more.

Fill out the form below and tell us: What do you want to know about how we do investigative journalism?