TACOMA — Three days after Manuel Ellis died of oxygen deprivation after a chance meeting in a dark intersection with Tacoma police, an officer involved in the minutes-long chaotic scrum said he never noticed Ellis struggling to breathe.

“Not that I recall,” Tacoma police Officer Christopher Burbank told a detective investigating Ellis’ death. “No.”

But eyewitness statements and video recordings of the March 3 incident later surfaced, showing that Ellis said he couldn’t breathe at least four times — three of them in Burbank’s presence.

As a man who lived nearby wandered up to ask police if they needed help, Ellis gasped once more, “I can’t breathe, sir.” A recording from a Ring camera nearby recording the response from one of the officers: “Shut the (expletive) up!”

Burbank’s contradiction is just one example of the mounting inconsistencies in the Washington State Patrol’s investigative report on Ellis’ death, a case that has become the Pacific Northwest’s touchstone in the national reckoning over racial inequities in police use of force.

The report, which offers the clearest detail to date, reveals that the first officers to engage Ellis — Burbank, 35, and Tacoma police officer Matthew Collins, 37 — contradict each other on crucial details about how the episode took a violent turn.

The Pierce County Sheriff’s Department had initially investigated Ellis’ death, but the inquiry was so flawed that Gov. Jay Inslee reassigned it to the State Patrol, which gathered witness accounts that sharply contradict the officers’ stories.

The WSP investigation, which did not include a recommendation whether to charge the officers, has been in Attorney General Bob Ferguson’s hands since Nov. 12. He is expected to decide soon whether to file charges.

Ferguson said a team of prosecutors, retired judges and a representative from his civil rights division was reviewing the case. “This is the top priority of my Criminal Justice Division at this time,” he said in a statement.

Lawyers for the officers did not respond to questions about this story. In a statement last summer, attorney Michael Staropoli disputed the importance of the eyewitness videos and urged the public “to avoid prejudging this matter, especially with only partial facts.”

James Bible, the Seattle attorney representing Ellis’ family in a lawsuit against Tacoma, said the details in the State Patrol’s investigation are “reminiscent of a lynching.”

“Just as so many in the past begged for their lives prior to being hung to death, Manuel told his killers he couldn’t breathe. Rather than hear his plea for help, the officers callously placed a spit mask over his head and watched him breathe his last breath,” Bible said. 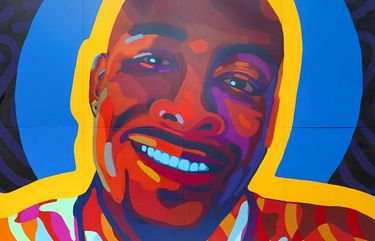 Two others who helped restrain Ellis, according to the WSP report — Tacoma police Officer Armando Farinas, who placed a nylon spit hood over Ellis’ head at the scene, and Pierce County Sheriff’s Detective Sgt. Gary Sanders — were not placed on leave.

The medical examiner concluded the spit hood, used by police to prevent people from spitting at officers, contributed to Ellis’ death. Methamphetamine intoxication and heart disease were listed as lesser contributing causes.

The Pierce County Sheriff’s Department, when it was initially investigating, sought interviews with the officers the night Ellis died, but a representative from their union intervened, delaying interviews until March 6-9. Each officer invoked his Fifth Amendment right against self-incrimination when the WSP requested interviews.

After the WSP took over the investigation, detectives interviewed three eyewitnesses who had not been questioned by the Sheriff’s Department, including two who had recorded the incident and captured images of Ellis appearing to submit to police as Burbank tased him.

What the officers said

Late on March 3, Collins and Burbank were driving a marked Tacoma police cruiser in an area on the city’s southern fringe that Collins described as “a hotbed … lots of crime,” in an interview with detectives.

As they stopped at a red light, Collins, behind the wheel, said Ellis was standing in the middle of the intersection, trying unsuccessfully to open the passenger-side door of a car as it slowly turned in the intersection; Collins wondered if he’d stumbled on a carjacking or domestic dispute in progress.

Collins said he summoned Ellis, who was wide-eyed and sweating and carrying a grocery bag and a jug of water, to his window. No video of Ellis trying to hassle a passing car has surfaced, and Tacoma police do not wear body cameras.

Collins said Ellis’ demeanor changed after he was directed to sit on the curb, as Ellis became fixated on Burbank in the passenger’s seat, striking the window.

As Ellis and Burbank struggled to gain control of the SUV’s door, Collins said, he hopped out.

Collins, an Army veteran, defensive-tactics trainer and former competitive wrestler, described Ellis as among the fiercest combatants he’d ever encountered, exhibiting “superhuman strength” by grabbing his protective vest, lifting him off the ground and hurling him airborne into the street. “I was literally off my feet like a child,” said Collins, who weighs 230 pounds in his full gear.

In his interview with detectives, Burbank described the episode similarly, but with key discrepancies. Foremost among them: Burbank did not witness Ellis hoist and throw Collins.

Up to that point, the officers’ stories were in lockstep. But in Burbank’s version, Ellis punched his window and assumed an aggressive stance facing Collins, “and probably was about to attack him or start fighting him,” when Burbank “hit [Ellis] with the door to draw his attention away from Officer Collins.”

Collins told investigators that he deliberately tried to choke Ellis until he was unconscious, using a police tactic known as a “lateral vascular neck restraint” — a chokehold.

He said he punched Ellis as Burbank used a Taser on him. Burbank said he zapped Ellis four times, and didn’t remember Ellis saying any other words even as Collins repeatedly struck him in the face. “It appeared he wasn’t affected by anything,” Burbank told detectives.

What witnesses and video captured

Unbeknownst to the officers, witnesses began recording the melee with their cellphones, and told WSP detectives they saw Burbank knock Ellis forcefully to the ground with the door of the SUV.

Pierce County Sheriff Ed Troyer said investigators could not identify eyewitnesses until the final week of his department’s investigation. When contacted, he said, the eyewitnesses refused to grant interviews. The witnesses later talked with the State Patrol.

One eyewitness video shows Collins choking Ellis from behind while he appears to stammer, his hands raised in submission, as Burbank delivers Taser strikes that bring Ellis to the ground. There, Collins can be seen in the videos pressing Ellis’ head to the pavement with knees to his upper back or neck.

Another video shows officers on top of Ellis, striking him repeatedly while he screams. None of the footage, or the people who recorded it, show Ellis acting violently toward officers, although he is squirming as the officers described. They told investigators they were worried Ellis was trying to escape or gain an advantageous position.

Bible, the Ellis family lawyer, said his impression from the witness videos is that Ellis, who had repeatedly told officers he couldn’t breathe, was struggling to reposition himself in hopes of opening his airway.

As Burbank and Collins violently struggled with Ellis, ominous silence summoned Ford and Rankine as the first backup to the scene. Over the police radio, Ford heard a series of open mic clicks, but no officers’ voices — a signal he interpreted an officer was in trouble, he told detectives in an interview.

“I was thinking the worst, that Officer Burbank and Officer Collins most likely were either dead or shot,” Rankine told detectives.

They arrived to find Collins and Burbank looking exhausted, and took over restraining Ellis. The officers later were found to have scratches and minor injuries.

Ford grabbed Ellis’ leg, and Rankine sat atop Ellis’ back. “I jumped, I moved all my weight to the middle of [Ellis’] body… almost in like a seated position on this individual,” Rankine said, as Ellis writhed.

Ellis, in a calm voice, said he couldn’t breathe, according to both Rankine and Ford, who were soon joined by Farinas and Sanders. “I was like, ‘If you’re talking to me, then you can breathe just fine’…I was like, ‘If you stop struggling with us and if you calm down, I will release some pressure off you,’” Rankine told detectives.

Ellis was not fine. He soon was rolled onto his side to recover as Ford urged him to be calm, but then moved him onto his belly again, according to detectives’ notes. Ellis appeared to be fading out of consciousness. Rankine checked Ellis’ pulse and found it faint. He was declared dead at the scene.

Sanders’ arrival on the scene changed the direction of the investigation. He rushed there from a moonlighting security detail at Pacific Lutheran University, and told detectives he held Ellis’ leg while officers applied a “hobble” — a nylon cord that bound Ellis’ handcuffed hands to the cuffs on his ankles.

The Pierce County Sheriff did not disclose Sanders’ presence at the scene — a disqualifying conflict of interest — until the night before its full investigation was to be sent to the Pierce County prosecutor. That prompted Inslee to reassign it to the State Patrol.

Burbank’s last memory of the scene, as he was being driven away by another officer, was “looking up and seeing … doughnuts spilled out in the street,” the snack Ellis had been carrying home when officers first saw him.