Todd Thurman was 13 years old when the abuse started. He says his Boy Scout leader burned his skin with cigarettes to keep him from reporting the dozens of sexual assaults between 1979 and 1981.

Four decades have passed, but Thurman said he still thinks about those brutal encounters, and about reporting the assaults to the police and to the Olympia-based chapter of the Boy Scouts in 2002, but learning that his abuser wouldn’t be fired or charged.

But the Boy Scouts of America has.

A rape claim against the Boy Scouts might entitle a survivor to as little as $3,300 under a nationwide proposal filed in court Tuesday. The proposal — filed as the Boy Scouts of America seeks Chapter 11 bankruptcy protection — offers the first glimpse at a detailed financial plan to settle a historic 82,500 claims made against the nonprofit youth organization, accused of ignoring decades of rampant sexual abuse.

The proposal describes a settlement scale based on the type of abuse endured and the state in which it happened, with formulas for maximum and minimum payments.

It uses a matrix not unusual in mass tort cases, resembling the payment setups in other mega-settlements, like those involving tobacco, asbestos or pharmaceutical companies, where settlements generally varied based on the person’s medical conditions, among other factors.

But in a sexual-abuse case, seeing meager payout estimates and categories of abuse is unsettling for some. A claim of “touching unclothed,” for example, would entitle someone to about twice as much as a “touching clothed” claim in Washington, the document shows. A Washington survivor who was molested unclothed could collect as little as $9,000 under the proposal.

“Unless you’re a survivor, unless you’ve experienced this, how can you apply or say, ‘This activity deserves this amount of dollars?’ ” said Thurman, who does not yet know how much he would receive. “You go from being a person to becoming ink on paper basically. You become a number.”

The proposal would allow local Boy Scouts councils — including the Chief Seattle Council, which faces hundreds of abuse claims — to retain most of their assets while the umbrella national organization settles the claims. Critics say it leaves money on the table that could increase the settlement fund and, ultimately, individual payouts.

The national settlement fund reached a historic $1.9 billion this month — the highest ever in a sexual-abuse case — after the BSA’s insurers, Hartford Financial Services, agreed to pay $787 million. The Church of Jesus Christ of Latter-day Saints, previously a major Boy Scouts sponsor, contributed $250 million. The national Boy Scouts of America contributed another $250 million.

The rest of the settlement comes from the BSA’s 252 local councils, individual chapters that operate under the national umbrella organization. The contributions were negotiated during the bankruptcy case. 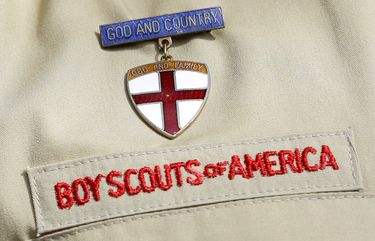 Even though some local councils have more in unrestricted assets, they might only contribute a fraction of their cash toward settlements. For example, Chief Seattle Council faces 295 claims of sexual abuse, which, by the Scouts’ own estimates, makes the chapter liable for as much as $357 million in settlements based on the proposed matrix, court records show.

Under the latest proposed payout structure, however, the Chief Seattle Council would pay about $7.5 million toward settlements — and keep its remaining $22.5 million in net assets. The Pacific Harbors Council in Olympia faces 208 claims and would contribute about $2.3 million of its $5.4 million in assets. The Mount Baker Council in Everett, which faces 135 claims, will contribute $2.2 million of its $7.8 million in assets.

In total, local councils nationwide will contribute about $600 million of their collective $1.8 billion in unrestricted assets.

“It’s painful to see,” said Jason Amala, a Seattle-based lawyer whose team represents more than 1,000 claimants, including Thurman and about 50 survivors from Washington. “These numbers are so low because they’re letting the council keep so much of their money.”

The BSA’s proposal requires majority support from claimants, but attorneys representing the survivors are split in their support.

“People are horrified after seeing just how low these numbers are,” said Amala, who is encouraging his clients to reject the proposal.

A less-detailed document filed in court two weeks ago included larger minimum and maximum settlement estimates for survivors, but some attorneys still criticized the proposal.

Evan Smola, a Chicago-based lawyer whose firm represents 4,000 victims, told Reuters that the payouts paled in comparison to other sex-abuse settlements, including cases against the University of Southern California and Michigan State University, where individual settlements often reached six figures. “This is, we consider, a revictimization of our clients,” Smola said.

Washington falls in the second-highest tier among the five categories for states, where the same claim is worth a minimum of $36,000 or a maximum of $1.62 million, based on the proposal.

Where a settlement falls on the minimum-to-maximum scale depends on a number of factors, including the frequency of abuse, the health impacts and the amount of evidence a survivor can produce.

Survivors would have to produce evidence and submit to interviews or examinations to maximize the claims. Though the numbers aren’t set in stone, the highest value on the proposed scale is $2.7 million for rape cases, court records show.

The Coalition of Abused Scouts for Justice, a group of 26 law firms collectively representing more than 60,000 claimants, expects the settlement fund — and, ultimately, individual payouts — to spike as the lawyers pursue more contributions from insurance companies and nonprofits that sponsored the Boy Scouts, said Adam Slater, a New York-based attorney with the coalition.

The coalition supports the proposal, saying it offers thousands of claimants an avenue for justice in states where they wouldn’t be eligible to collect any money because of unfavorable statutes or evidence burdens, particularly for decades-old claims.

“If it was up to me, I would love to see survivors compensated fairly across the board,” Slater said of the varied settlements between states. “The flip side is if you were out in the court system, you might get zero dollars and your case would be dismissed.”

While it is jarring to see exact dollar figures associated with different types of sexual abuse and varied payouts from state to state, experts say it’s not unusual to see scaled, and even low, settlement amounts in mass tort cases.

“What makes these types of claims new isn’t the matrix used, but it’s the nature of these claims,” said Adam Zimmerman, a mass tort expert and professor at Loyola Marymount University in Los Angeles. “We haven’t historically handled sexual assault cases as a mass tort.”

Mega-settlements seek to fairly distribute limited funds to claimants. “But in doing so, you lose more of the person that these claims represent,” Zimmerman said. “There’s a trade-off.”

A byproduct of the sheer scale of the Boy Scouts case: Settlements that might be far lower than those in other sexual-abuse cases. The Seattle Archdiocese, for example, settled a priest-abuse lawsuit filed by six men for $7 million in 2018.

The Boy Scouts of America said in a statement that its proposal is aimed at fairly paying survivors while carrying on with Scouting.

“We are deeply saddened by the pain and suffering that survivors of past abuse have endured and are committed to fulfilling our social and moral responsibility to equitably compensate survivors while also ensuring that Scouting’s mission continues,” the statement reads.

To Thurman, there can’t be justice until survivors see better settlements — even if it means depleting the Boy Scouts’ assets and ending the institution.

“The settlement isn’t anywhere close to the gravity of the perpetration,” he said. “Should they come out of bankruptcy solvent? In my opinion, no. They gave that right away long ago.”

Tips are the lifeblood of investigative reporting. Good tips are clear, specific, have documents or evidence to back them up and involve a problem with real-world consequences. We accept tips by several methods, including through secure encrypted email, text and phone calls, as well as mail, so a reporter can follow up with you.
Lulu Ramadan: 206-464-2331 or lramadan@seattletimes.com; Lulu Ramadan is an investigative reporter at The Seattle Times and a distinguished fellow with ProPublica's Local Reporting Network.
Advertising