This story was produced in partnership with ProPublica’s Local Reporting Network.

Washington lawmakers dedicated $1.5 million to remove toxic fluorescent lights from schools and an additional $125,000 to study environmental hazards and create new standards to protect students from exposure to harmful substances.

In requesting the funding, lawmakers cited an investigation by The Seattle Times and ProPublica into a Monroe campus where children and staff were exposed to a combination of harmful conditions, including elevated levels of polychlorinated biphenyls, or PCBs, a banned chemical that the Environmental Protection Agency has linked to cancer and other illnesses.

More than 200 students, parents and teachers at Monroe’s Sky Valley Education Center filed lawsuits claiming they developed cancer, brain damage, hormonal problems and other illnesses after exposure to PCBs on campus. Two of the lawsuits have resulted in extraordinary jury awards against Monsanto, the manufacturer of the chemicals, totaling nearly $250 million to 11 people. At least 15 lawsuits are pending.

The school district knew as early as 2014 that PCBs were leaking into classrooms from aging fluorescent lights but were slow to respond to the unfolding crisis, The Times reported.

The Legislature’s proposed budget, agreed upon by the House and Senate on Wednesday but awaiting the governor’s approval, allocated $125,000 to the University of Washington’s Department of Environmental and Occupational Health Sciences to review policies on environmental conditions in schools. The research will cover several contaminants, including PCBs, lead, asbestos and mold. The study is due in December.

“These are first steps,” said Rep. Gerry Pollet, D-Seattle, one of a handful of lawmakers who pushed for the funding. “If we have a report to the Legislature in December, we will have a first look at what standards need to be adopted to protect children’s health in schools, how to remediate and from there we will learn how much we need to fund.”

An additional $1.5 million is earmarked for the state department of education to remove fluorescent lights known to contain PCBs, which were banned by the EPA in 1979 but are suspected to linger in building material and light fixtures in aging campuses across the country.

Those same lights leaked oily PCB liquids into classrooms at Sky Valley, releasing the chemical into the air and onto surfaces. At that campus alone, it cost more than $1.6 million to remove PCB-laden material once it seeped into carpets, furniture, air filters and other material. 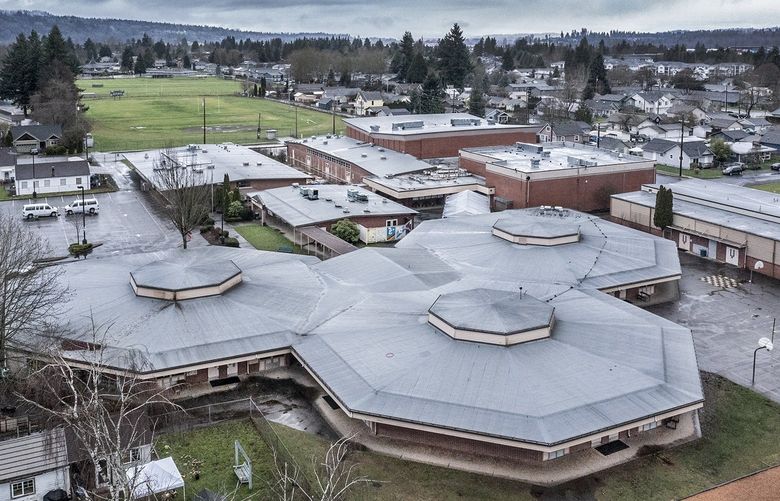 The goal is to replace the fluorescent lights with energy-efficient alternatives, which will save school districts money in the long run, said Rep. Alex Ramel, D-Bellingham, who also pushed for the funding after reading The Times’ reporting. Replacing the lights is “the lowest-hanging fruit there is,” he said. “It would make sense even if they weren’t leaking toxins into schools.”

Pollet acknowledged that the proposed budget’s $1.5 million won’t cover the full cost of removing the toxic materials from schools. But he called the funding an “urgent, easy Band-Aid” and the first of many steps.

In addition to the funding, lawmakers proposed giving the Washington State Board of Health power to take action on classroom contamination.

The proposal would have reversed a rule that bars the board of health from creating and enforcing rules relating to conditions in school buildings — an exclusion that is unique to schools. That language was withdrawn in the late stages of negotiations and did not make it into the latest budget.

“What’s crazy is the board of health can adopt a rule protecting people from exposure to contaminants in state government buildings, for example, but not in schools,” Pollet said.

Though the board of health is responsible for maintaining safe conditions on campuses, the agency can’t take action without the Legislature’s approval.

This gap and others allow contaminants to fester in schools across the state.

At Sky Valley, health inspections repeatedly flagged hazards on campus as early as 2014 and made recommendations to fix the problems. But over the years, the levels of PCBs climbed, even after multiple cleanup attempts, state and federal environmental documents revealed.

Though the budget language doesn’t address these specific shortcomings, the proposal describes the study as a precursor to changing “policies and standards in Washington schools.”

In the Sky Valley lawsuits, juries awarded 11 parents, teachers and students a collective $247 million in verdicts against Monsanto. Other Sky Valley families are awaiting trial, one of which is currently underway.

Bayer, which acquired Monsanto in 2018, denied the allegations both in the lawsuits and in a statement to The Times. The company is appealing the jury verdicts.

The Monroe School District, which serves about 6,000 students, agreed to a $34 million settlement with parents and students exposed to PCBs, court documents filed last month revealed. The extraordinary settlement was filed under a court seal and is the maximum allowed under the school district’s insurance policy. The settlement amounts to about a third of the district’s entire operating budget.

In court documents, the Monroe School District defended its actions at Sky Valley, saying it communicated problems to parents and addressed PCBs appropriately. The filing notes that Washington law only broadly mandates that schools maintain safe conditions, but “none of these requirements are specific to PCBs in building materials.”

In a statement to The Times, the district said it supports legislative interest in strengthening testing and remediation standards in schools, adding that those efforts are “more effective when the legislature also provides funding.”

The school district continues to clear Sky Valley of PCBs under the guidance of the Environmental Protection Agency, which has yet to give the school a clean bill of health after eight years of remediation efforts. School district records show, however, that the latest testing on campus, conducted by a district contractor in August, found only minor levels of the chemical on campus.

Lulu Ramadan: 206-464-2331 or lramadan@seattletimes.com; Lulu Ramadan is an investigative reporter at The Seattle Times and a distinguished fellow with ProPublica's Local Reporting Network.
View Comments
Posting comments is now limited to subscribers only. View subscription offers here. For more information, visit our FAQ's.