Winning an election was the furthest thing from Tarra Simmons’ mind in 2013 when she was working at Burger King, worried about how she was going to pay her rent. She had recently been released after a 30-month prison sentence for drug and theft convictions.

“From the Big House to the State House. . .We do recover!” she tweeted Wednesday.

The newly elected Democrat will represent the 23rd District in Kitsap County, about 40 miles outside Tacoma.

It was an uphill road to victory for the former nurse and mom of three. When she was released from prison, a fast-food restaurant was the only place she could find a job.

“I couldn’t get hired as a nurse again, and Burger King was the only place that would give me a job,” said Simmons, 42. “My wages were being garnished to pay my court fines, and I was also trying to reunify and catch up with my kids.”

“It was a really hard time — the barriers to succeed seemed overwhelming,” she said. 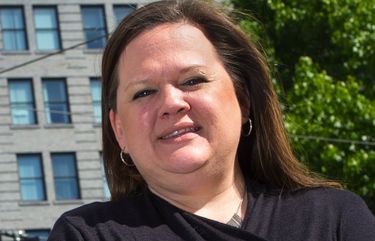 Ultimately, Simmons decided to help fight for changes for people after they’re released from prison. That led her to apply to law school; she was accepted to the Seattle University School of Law, and ended up graduating with honors in 2017.

Simmons is now a civil rights attorney at the Public Defender Association and is also executive director of the Civil Survival Project, a nonprofit that helps former inmates navigate legal and financial barriers as they rebuild their lives.

Simmons said she decided to run for public office as a “second chance” candidate focused on prison reform in the hope of helping those with prison records find housing and jobs and start anew with their loved ones.

“After my own frustrating experience, I knew that I was lucky to find a way forward,” she said. “I wanted to do something to help make it easier for others.”

Simmons won her primary election in August and then clinched her seat in the Washington House of Representatives with nearly 65% of the vote.

“I was so pleased to see my community take a stand for second chances and vote for me in spite of my background,” she said. “I wish I could have hugged everyone who helped get me elected. It was quite the night.”

I was so pleased to see my community take a stand for second chances and vote for me in spite of my background. I wish I could have hugged everyone who helped get me elected.”
— Tara Simmons

Since her win Tuesday, Simmons said she has been swamped with calls from reporters and well-wishers, intrigued by the story of how a former drug addict and middle school dropout found the courage to rise above the odds.

Simmons was 13 when she quit school and 14 when she became pregnant, she said.

“I had a lot of trauma and violence in my home,” she said. “I was around drugs and alcohol all the time.”

Even though she gave birth at 15, Simmons said she eventually became the first person in her family to graduate from high school. Then, at 21, she earned a bachelor’s degree in nursing from Pacific Lutheran University and spent the next 11 years working as a registered nurse.

“I had a long clean period,” Simmons said, “but then in my early 30s, I started taking drugs to cope with depression. I started with pain pills, then moved on to methamphetamine. And the alcohol abuse that started in my teens got progressively worse.”

In 2011, Simmons said she was arrested three times for selling drugs and was eventually sentenced in Kitsap Superior Court to 30 months in prison.

After her release, when she became worried that she might start the cycle of drug abuse again, Simmons reached out to Shon Hopwood, then a University of Washington law student, who had been outspoken about his own conviction for bank robbery.

Hopwood, who is now an associate law professor at Georgetown University, had written a book about his experience called “Law Man.” He agreed to meet with Simmons and help her apply to law school.

“He became my inspiration,” Simmons said. “He understood what I’d been through and became a great friend and mentor.”

Hopwood recalled: “There were times when Tarra wondered if she could overcome all the barriers, and I told her to keep pushing. We had lots of heart-to-heart conversations. I was so impressed by her courage — very few people could overcome the things that Tarra had to overcome.”

In early 2017, when the Washington State Bar told Simmons that she wasn’t eligible to take the bar exam because she was a felon, she knew exactly whom to call, she said.

That November, Hopwood argued her case before the state’s Supreme Court, and it decided in her favor the same day.

Hopwood said he wasn’t surprised this year when he learned that Simmons wanted to run for state office.

“Tarra understands how the law has a daily impact on the lives of those on the lowest economic rungs of society,” he said. “That’s the community she grew up in, and she understands those issues better than somebody who grew up with a more privileged life.”

Now that she’ll have a role in creating state law, Simmons said she hopes to focus on reducing Washington state’s incarceration rate and increasing access to mental health services.

“Instead of expelling kids who come to school with alcohol and get into fights, let’s figure out what’s going on with their families and invest in ‘wraparound’ services and partnerships to prevent more incarcerations later in life,” she said.

And to those who wonder what it feels like to be the first ex-con to take a seat in the Washington House, Simmons is ready with a quip: