After watching over 100,000 videos these past 10 years, Will Braden, of Seattle, the creator of CatVideoFest, chose his favorite 5:

This has been my personal favorite for as long as I can remember. It encapsulates everything we love about cat videos. It’s surprising, unique, unplanned, funny, and above all else, the cat is enjoying himself and the person is having fun, too. I just had to bleep out the (understandable) swear to include it in CatVideoFest. 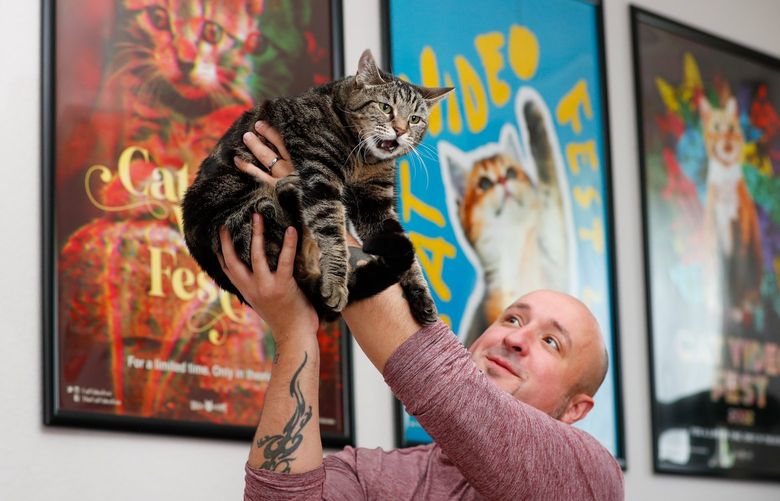 This is the epitome of the “semi-planned” cat video. The owners received this balloon as a gift that looked like their cat, Bert. They knew Bert would probably have a funny reaction to it, but they had no idea what it would be. It’s the perfect setup for a classic cat video.

Sure, I’m biased because I made this video. But in my defense, it won the “Golden Kitty” award at the first ever Cat Video Festival in 2012, and Roger Ebert himself declared it the “best cat video ever made”, so it kinda has to be included. Pardon the terrible French pronunciation.

One of the first animated cat videos to go viral in the infancy of YouTube. It proves the universality of cat ownership. Across cultures, geography, language, there is a common bond we all share when our cat is impatient for breakfast and we want to remain asleep.

This video gets a gigantic reaction in front of an audience! It’s a thoughtfully planned video that relies on the peculiar trait some cats share which is a steadfast belief that if they stay absolutely still, they are invisible. The closer the cat gets to the camera, the funnier it is. Sometimes it’s hard to explain exactly why some cat videos are hilarious, but you know it when you see it!