Out of all those videos, could he put together an all-time Top 5? No problem.

Will Braden made a list just like that. For him, for all those years, cats have been 24/7.

He’s the cinematographer who used to shoot everything from commercials to weddings and now has a full-time job as the guy who puts together CatVideoFest, “the world’s #1 cat video festival.” It’s playing in Seattle for three days beginning Friday at the Cinema Egyptian, and at various times in 100 other cities, mostly in the U.S.

No, after all these years, he doesn’t get tired of the videos.

“Everyone deserves a fun cat video to distract them from all the tough stuff in life,” says Braden.

Take a video such as “Bert the Cat vs Cat Balloon,” Some 8 million YouTube views since August 2011. Braden has seen that video dozens of times. 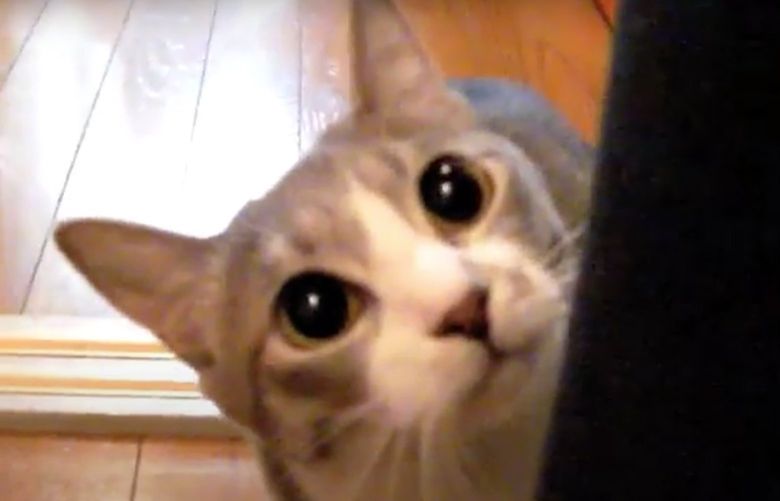 Besides the 400 or so submissions he gets annually, Braden searches the internet for material for the annual festival, which he’s been running since 2016.

Make fun of cat videos all you want; they’re an easy tag line. But Braden knows we can’t help but click on them.

Most mornings, Braden, 42, at his Wedgwood family home, starts with a search for cat videos on various sites. There are subreddits for videos of cats standing up, cats in sinks, cat bellies, cats looking sad, black cats, “cats being bros,” cats who yell, barn cats, lazy cats, people playing cats like bongos and dozens more cat subreddits totaling at least 60.

There are cat videos that Braden won’t use.

“There was one a few years ago that I thought was pretty funny. It was a bunch of videos of cats coughing up hair balls, edited to techno music,” he says.  Just too much.

A portion of Braden’s day consists of tracking down the owners of cat videos for which he needs permission for use in the festival. He says most people are glad to help out.

Sometimes he asks if the videos can be edited down for time. A seven-minute cat video just doesn’t work. He fits 215 clips into 75 minutes.

Braden is the Seattle guy who had transitory fame in 2012 with his Henri the Existential Cat video. That year it won the first Internet Cat Video Festival, held as a bit of lark by the Walker Art Center in Minneapolis.

But, surprise, surprise, that first contest drew 10,136 entries and over 10,000 cat lovers showed up to watch the videos projected for free in large open field by the center. Eventually, Braden took over the cat video festival.

Braden, 42, a Garfield High graduate, began his cat video career in 2006 while attending the Seattle Film Institute. He had procrastinated and a film assignment was due.

That is when Henry, the Braden family cat, a Seattle Animal Shelter “tuxedo” feline because of his black-and-white coloring, became Henri le Chat Noir, translated to black cat. The class had been watching French New Wave films and Braden decided to parody their pretentiousness.

Faking a French accent, Braden talked for Henri and his fictional angst. Receiving a good reaction from his instructor and fellow students, Braden started a Facebook page for the cat.

Then Braden entered the 2-minute, 5-second “Henri 2: Paw de Deux” in the Minneapolis contest, featuring a moody Henri making pronouncements such as, “The 15 hours I sleep a day have no effect. I wake to the same tedium.”

None other than the late Roger Ebert tweeted, “The best internet cat video ever made.”

Braden is married to Erica Braden, a Seattle public school first-grade teacher. They have a 2-year-old son, Elliott, and a cat, Nin.

Erica takes her husband’s avocation in stride. “I like cats, just not as much as he does,” she says. “I saw the passion he had for the videos, how hard he was willing to make it a success.”

Henry died in December 2020 at age 17. As Henri, he had starred in 11 videos that totaled 20 million YouTube views; had 168,000 Facebook followers; and with Braden had his angst-filled musings in two books.

Nin has not starred in her own videos. “She does not have the imperious stare that Henry had,” says Braden. She does, however, keep him company at his home office as he works on the cat festival.

Cats have managed to become part of our lives ever since their wild days 10,000 years ago, when in the Middle East five females began hanging around the early farming settlements. The cats made themselves useful by keeping a check on rats and mice, and then, with a little purring, it was easy manipulation of humans.

On Instagram, cats and dogs battle it out in popularity. On Feedspot, a social media measuring site, the Top 20 most popular accounts have 11 cats, seven dogs, and a fox and a hedgehog as outliers.

Braden says he understands why cat videos took off, as opposed to dog videos.

“We think of cats as being aloof. We like to see them taken down a peg, without being hurt,” says Braden.

Of course, cat videos have gotten academic research, such as this 2014 paper in M/C (Media Culture) Journal, titled, “Do Cats Know They Rule YouTube? Surveillance and the Pleasures of Cat Videos.”

In a society in which there is very little privacy, it says, “ . . . we observe the cat, who is unencumbered by our scrutiny. The uninhibited performance of cats in online videos offers viewers the prospect that it is possible to live without the gaze of surveillance. Through cat videos, we celebrate the untamable.”

In other words, as cat owners know, cats just don’t care what you think.

In Seattle, the festival runs Friday through Sunday at Cinema Egyptian as part of SIFF, the Seattle International Film Festival. A portion of ticket sales supports PAWS.