Even in a state loaded with beautiful motorcycle routes, it’s hard to beat the route around Hood Canal for ease and accessibility.

The roughly 132-mile trip through Kitsap, Jefferson and Mason Counties is sometimes called “the little loop” to distinguish it from the much longer journey around Highway 101.

Johnson has made the trip around the Hood Canal on his Yamaha Super Tenere 1200 dozens of times.

A longtime rider who had his first minibike at age 8, he’s logged thousands of miles on two wheels in Western Washington, many with local motorcycle groups he met on the social media platform Meetup.

But the Hood Canal run remains one of his favorites.

Suited for both novice and experienced riders, the ride can be completed in about three hours without stops. But it is more traditionally taken as a full day trip since there are lots of interesting landmarks along the way. There’s a 230-foot waterfall, a landmark oyster farm and saloon, a 100-year old farmer’s stand and trail heads to hikes, camping and off road adventures.

In addition to spectacular water and mountain views, the ride offers plenty of curves for pleasure and practice. Corners and curves factor into a disproportionate number of serious and fatal motorcycle collisions in Washington, so getting a good feel for twisting roadways is important, especially for newer riders and people just pulling their bike out of the garage for the season. 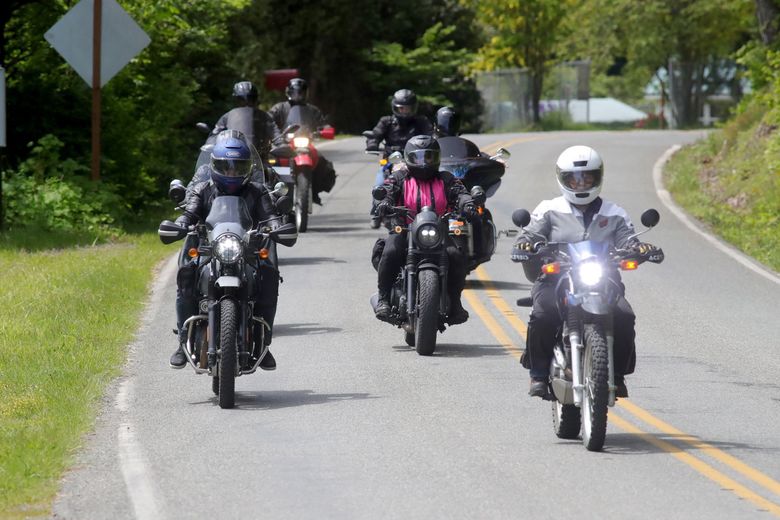 5 scenic, winding WA motorcycle routes, and how to stay safe on them

You can start anywhere in the loop, but many seasoned riders like to go counterclockwise starting at the Hood Canal Bridge. That way, the most scenic views, and the ice cream, come at the end of the trip — like an extra reward. And more importantly, you are not dealing with eastbound traffic over the Hood Canal Bridge, which on weekends is something to avoid at almost all costs.

On a recent Sunday, a group of eight West Sound riders met up in Bremerton and Poulsbo to make the trip. We were a diverse group on a wide range of bikes, from Wade Hudson on a 2009 Triumph Speedmaster to Steve Constantine on a 2000 Harley Ultra Classic 160cc.

Some of us had logged tens of thousands of miles on bikes and others were on their first handfuls of long rides. We had never ridden together before and most of us were meeting for the first time.

But even with the broad range in experience and riding style — some were speed demons and others putt putts (like me on my Yamaha XT250) — it was a fantastic trip.

It didn’t hurt that it was one of the first nice days we’ve had in this otherwise cold and damp spring and that everyone was in a good mood. Still, the loop itself was the star.

“It’s breathtaking,” said Christine Bundy, who rides a Royal Enfield Himalayan and dreams of one day rebuilding a vintage cafe racer. “I came from Tennessee where you can either see the mountains or the water but not both, so this is amazing.”

The Hood Canal Bridge on Highway 104

Under maritime rules, boats get the right of way over vehicles when bridges block the path of marine traffic and the bridge has to open for vessels needing passage. That takes about an hour usually. You can check the bridge’s status at wsdot.com/travel/real-time/hoodcanalbridgestatus.

The metal grates on the bridge can be a little intimidating to new riders. Just take it easy, ride straight and steady, and avoid braking suddenly.

One of the riders on our trip, Rachael Engel, has put many miles on her Honda Rebel 500 with her daily commute from Poulsbo to Woodinville. But she was only on her second recreational long ride. After riding solo for so long, she wasn’t sure if she knew all the unwritten rules of riding in a group. But she found the ride no trouble at all and the sights surprisingly impressive.

Her advice to other riders who feel a little intimidated?

“Relax and enjoy it!”

Trails near the Falls View Campground

While the trails farther south near Lake Cushman are better known, the Falls View Campground and nearby trails also offer some nice views for people who want to mix up their riding with a little hiking.

The campground, located about three miles south of Quilcene, will not be open in 2022, so you have to park outside the gate. Even so, it’s just a short walk to a lookout platform where you can see an unnamed waterfall across the canyon.

From there, the one-mile Falls View Loop Trail leads to a view of the cascading waterfall into the Big Quilcene River and has a small picnic area with four sites. You can continue on to the longer Falls View Canyon Trail, which leads into the canyon along the river.

A short, three-mile detour east on Dosewallips Road takes you to the 230-foot Rocky Brook Falls. The tricky part is knowing where to park and how to find the trail.

Park on the left side of the road where you see a small clearing and a sign that says “Rocky Brook Fish Board.”

Across the street, you will see a blue gate and a red sign that says “WARNING! Tampering with this facility is a FEDERAL OFFENSE!” and another that says “DANGER ENTER AT YOUR OWN RISK.” The signs are not referring to the path to the falls; they’re for a small concrete building that you’ll also see, which is a federally-protected hydroelectric facility.

Past the gate (and the building), the falls are just 200 yards up the trail. There is a pool at the base perfect for swimming, but be careful because the rocks can be slippery.

Veterans of the route will tell you a stop at the Geoduck Restaurant & Lounge in Brinnon is a vital part of the trip. The local favorite has fried oysters and chowder that aficionados rave over. You are likely to see a row of motorcycles parked outside all summer, as it is a perfect stop midway around the loop.

From the Geoduck’s deck, you can often spot animals including bald eagles, blue herons and kingfishers. You might even get to see an elk herd hanging out in the marshland, just feet from the parking lot.

Continue south on 101 over a low mountain pass, and then drop down to follow the west shore of Hood Canal.

This section of the ride is frequently traveled by vacationers on their way to camping in the Olympics, so be ready for some heavier traffic and know it can be a little slow. Take it easy and enjoy the nonstop elevation changes and long sweeping S curves.

The twisting road and the fun of riding it is what lures Sam Mills to take his Yamaha FZ09 out in the middle of the week when possible. “This road is a lot of fun when there’s no traffic,” he said.

If you are a slower rider, use the slow vehicle turn offs to let others pass. There’s no shame in it and it makes the ride safer and more fun for everyone.

Depending on the time of day and whether you ate at the Geoduck, your next stop could be the Hama Hama Oyster Farm and Saloon, located at the mouth of the cold and clean Hamma Hamma River. Stop and eat fresh oysters that were harvested less than a few hundred yards away, or buy some fresh oysters to take home.

Our food writers have recommended the roasted oysters in chipotle bourbon butter with toasted baguette, raw oysters on the half shell or trying to shuck yourself for a DIY experience.

If you want to eat at the outdoor waterside site, try to get there before 1 p.m. on the weekends, hospitality manager Jinelle Kubly suggests.

“It can be really hard to get a spot on Saturday and Sunday afternoon,” she said. She recommends Friday or, better yet, go on Monday.

Hoodsport is another good place to stop and stretch your legs. The small town has close to a dozen little shops, eateries and a distillery.

It’s also the entry to Lake Cushman and the Staircase hikes, so this part of the route can be crowded. People riding dual sports, motorcycles designed for both on and off-road use, may enjoy detouring up to Cushman, though the unpaved road does get dusty in the summer.

The Lucky Dog Casino in Skokomish can be another stop for anyone looking to try their luck (or just cool down in the air conditioning). It’s included in a lot of motorcycle poker runs and you’ll frequently see bikes lined up outside.

Shortly past the casino, you’ll take a left onto Highway 106 to Union and encounter another round of twists and turns alongside gorgeous waterfront views.

Stop for ice cream at the 100-year-old family-run Hunter Farms, where you can also get loads of fresh produce in the summer. The farm offers hay rides and pumpkin picking in the fall.

Right across from the farm is the Purdy Cut-Off road, which leads to a series of unpaved, pitted gravel and dirt back roads through the Olympic Mountains. These roads, some of which pass Spider and Wynoochee lakes, are best to take on with a dual sport or adventure bike. There are some incredible riding and camping opportunities up in there! But that’s a whole other trip for you to check out another time.

On your way back toward Kitsap County, keep your eyes peeled for the easy-to-miss Dalby Water Wheel. The wheel was originally part of a cable car system in Seattle and was brought to the waterside town of Union by Ed and Ethel Dalby in 1924. The wheel generated enough electricity to power their home and several cabins until the 1940s.

Next, head to Belfair, and from there to Gorst, where you’ll either veer south to catch the Southworth ferry back to Seattle or continue north to Bremerton, Bainbridge Island or Kingston.

After completing his most recent trip around the little loop, Chris McManus said “Even though it’s not very far from me, it makes me feel like I’m on vacation.”

McManus was born and raised in Kitsap, and has ridden the loop on his Honda XR650L (or other bikes like it) hundreds, if not thousands, of times. But he says it never gets old.

“It lets me escape the normal routine of my life and gets me out of my head.”