Spurred on by bicycle fever during COVID-19 lockdowns, more young adults in Seattle are riding bikes, but not all are finding the road a hospitable place, new survey data shows.

In Seattle, 33% of people under 35 years old and 25% overall reported biking more since the pandemic began, according to a new poll of Seattle and Portland residents.

With more bicyclists on the road, the struggle to share it remains real, the PEMCO Insurance survey found. The majority of cyclists — 63% in Seattle and 77% in Portland — say they’re only somewhat or not at all comfortable sharing the road with vehicles, other cyclists and e-bikes.

The survey, conducted by FBK Research of Seattle, asked 400 people each from the Seattle and Portland metro areas about their driving habits and attitudes.

Among all Northwest bicyclists surveyed, about three-quarters (74%) consider themselves to have beginner or intermediate cycling skills, with only 24% self-identifying as advanced.

Paul Tolmé, a spokesperson for Cascade Bicycle Club, said it’s important to remember when reading statistics like these that there are not two separate camps for bicyclists and drivers. “Most of us are both,” he said. “What these stats show is that about half of people think bikes and cars share the road well.”

Where opinions diverged, Tolme said it was important to keep in mind that in an accident, cyclists face a higher risk of dying or being seriously injured than their counterparts behind the wheel.

“While some people riding bikes behave badly, they typically are not putting anyone in danger but themselves,” he wrote. “A reckless or speeding motor vehicle risks the life and safety of people riding bikes, walking, and driving.” 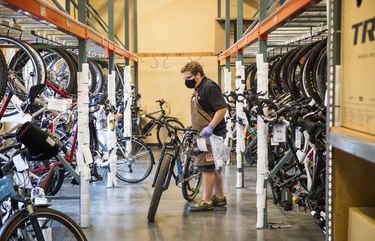 Want a bike this summer? Expect a wait as COVID-19 cycling boom continues in Seattle

“The battle for road supremacy between those on two and four wheels has been going on in the Northwest for years,” said PEMCO spokesperson Derek Wing. “It’s not surprising to see more than half the people polled say cyclists and drivers do a ‘fair’ or ‘poor’ job of sharing the streets, likely referring to the group they’re not part of.”

Overall, cyclists seem to have a better impression of drivers’ ability to follow standard traffic rules, with half of cyclists reporting that most or all drivers follow traffic rules. Only 42% of drivers said the same for cyclists. In fact, almost a quarter of Northwest drivers (19%) went so far as to say only a few or no cyclists follow the rules of the road when on their bikes, the survey found.

Tolmé said what some drivers may see as “bicyclists behaving badly” could actually just be people on bikes following state law.

“It is the responsibility of people driving to give people on bicycles at least three feet of space, and it is a bicyclist’s right to take the lane if that keeps them safest. Bicyclists are also allowed to roll through stop signs if the coast is clear. When everyone understands the rules of the road, more people can share it safely,” he said.

Regardless of Northwesterners’ comfort level on two wheels or four, here are a few rules and tips for sharing the road: