Editor’s note: This is a live account of updates from the Puget Sound region’s snowy and windy Wednesday. An recap and outlook for the rest of the week is available here.

The Puget Sound region may be in the clear for snow — at least the kind of snow that piles up and leads to slick roads and school closures.

Accumulation over the past 24 hours has varied widely across Western Washington. In Seattle’s case, Wednesday afternoon flurries — concentrated mostly on high hills such as Queen Anne and Magnolia — didn’t last long. Fairly heavy snow, though, was seen on the Kitsap Peninsula, near Hood Canal and up toward Port Townsend.

The snowfall was also heavier to the north. Wednesday’s snow didn’t leave much on the ground in Snohomish County, compared to previous days, but the new snow and gusty winds did complicate the evening commute.

Another band of precipitation arrived later in the evening, bringing a chance of rain with snow mixed in. Any snowfall wasn’t expected to be significant, and the region will warm and transition to rain going into the weekend, said meteorologist Dana Felton with the National Weather Service in Seattle.

“For most of us, we’re probably not going to see any more snow here for the next couple of days,” Felton said.

The snow still posed problems in areas that received heavier snowfall. Sections of Interstate 90 and Highway 2 were closed Wednesday night because of collisions and unsafe conditions, such as power lines on the roadway.

Here’s what happened with the snow and wind Wednesday.

What’s on the ground

While Seattle got almost no snow overnight Tuesday, it did fall across the Olympic and Kitsap peninsulas and in Northwest Washington, with the most accumulation in Whatcom, Skagit, San Juan and Clallam counties. And there was snow on the ground and ice on the roads Wednesday morning in places including Snohomish County and East King County.

Reports of overnight snowfall varied widely across Western Washington, from 18-22 inches in Port Angeles to zero in Northeast Tacoma.

“We were never expecting that much in Seattle, but the north really got nailed,” said meteorologist Dustin Guy with the weather service.

Flakes briefly returned to the Puget Sound lowlands, including Seattle, early Wednesday afternoon but did not result in much accumulation.

Also Wednesday afternoon, a mass of dry, easterly air forced itself through the gaps at the base of the Cascade Mountains and brought strong wind gusts up to 50 mph to North Bend. The wind caused power outages there around 4 p.m. Some outages were also reported in Kirkland.

Peak winds over the past 3 hours. Destruction Island is living up to its name with a gust just short of hurricane force in the past hour. #wawx pic.twitter.com/BkQ7SR35zg

The same wind also brought warmer air along the Interstate 5 corridor, which makes it tricky to get accumulation, according to the weather service.

A high-wind warning was in place through 10 p.m. Wednesday for the East Puget Sound lowlands including North Bend, Enumclaw, Bonney Lake and Woodinville, which could see gusts up to 60 mph. A warning was also in place for areas along the Strait of Juan de Fuca, such as Whidbey Island and the San Juan Islands, and a gale warning is out for boats in the strait. A storm warning is in effect for the outer coastal waters.

Strong winds bring an increased risk of tree damage, power outages and blowing snow. With outages possible in the days ahead, know the steps you should take.

Seattle will be breezy but not dangerously windy overnight, with winds from 15 to 25 mph and gusts up to 35 mph, according to the weather service.

Temperatures at Seattle-Tacoma International Airport were around 40 degrees around 4:30 p.m. Wednesday. The temperature isn’t expected to drop much overnight, with a low of 34 degrees expected for the Seattle area, according to the weather service.

Precipitation through the weekend will mostly come down as rain, although some areas to the north of Seattle and on the Kitsap and Olympic peninsulas may see a mix of rain and snow through Thursday, according to the weather service. Some higher-elevation spots in the Seattle area may also see a few flakes from Thursday afternoon into Friday, but it won’t be much, according to the weather service.

By the weekend, Seattle should be back to its usual January self: rainy with highs in the mid-40s.

In Snohomish County, districts that canceled classes Wednesday include Arlington, Edmonds, Granite Falls, Index and Stanwood. Districts that delayed classes include Everett, Lake Stevens, Marysville, Monroe, Mukilteo, Snohomish and Sultan. That’s according to FlashAlert, which tracks most schools and districts in the region.

Sound Transit rerouted some of its buses Wednesday, and King County Metro also had some buses in north and east King County still on snow routes. All but three Metro bus routes returned to regular service at 7 p.m. Wednesday.

Some ferry runs between Port Townsend and Coupeville were canceled Wednesday because of high winds, according to Washington State Ferries.

While roads have been mostly clear Wednesday in Seattle, conditions were troublesome elsewhere.

Both ends of the US 2 trestle appear to be icy, which is causing vehicles to slip as they try to climb the ramps. Our crews are on their way to put down salt/sand to improve traction. pic.twitter.com/kpp13L6hXf

The advice from authorities when the roads are snowy: Don’t drive if you don’t have to. So why do surprising numbers of Pacific Northwesterners hit the roads anyway? Many feel pressured to drive to work on snow days — and think they’re good at doing so, a PEMCO Mutual Insurance survey found.

Interstate 90 closed in both directions around 7 p.m. Wednesday between North Bend and Ellensburg after multiple vehicles spun out and collided. Motorists at the summit could travel west toward Seattle, but could not travel east, according to the state Department of Transportation. An evaluation will be made at midnight, but there is no estimate for reopening.

I-90 had also closed in the area earlier Wednesday because of collisions.

Highway 2 remains closed between Skykomish and the Stevens Pass summit but was declared “temporarily reopened” for locals midday Wednesday between Gold Bar and Skykomish “unless conditions change,” according to the state Department of Transportation.

The highway had been closed since Sunday night, when some drivers got stranded just outside Gold Bar because heavy snow sent trees, tree limbs and power lines tumbling. A portion of the road reopening means that those living in Index and other nearby small communities can drive to Gold Bar to stock up on essentials.

The Washington State Emergency Management Division brought food, water and fuel to the Skykomish area between 10 a.m. and 2 p.m. Wednesday and offered voluntary evacuations for those who wished to leave.

Expected high winds could prompt another closure of the highway if snow-laden trees and power lines start to fall again. 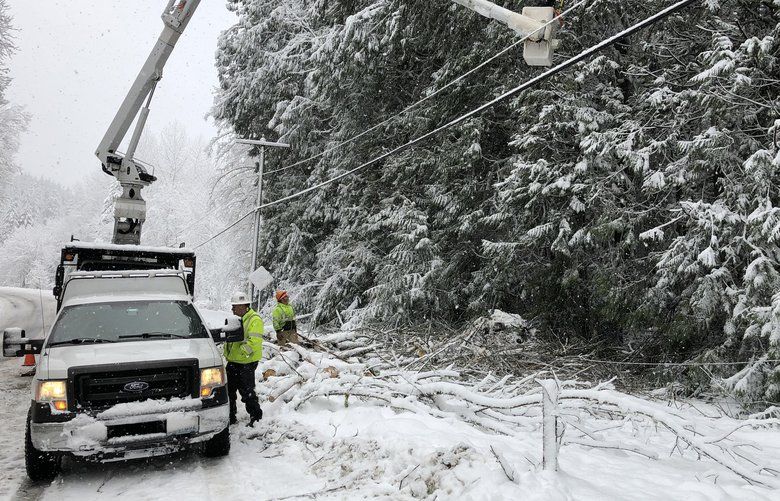 Residential collection of garbage, recycling, compost and yard waste is delayed one day for the rest of the week for all Seattle Public Utilities customers, the agency announced on its website Wednesday.

If your usual collection day is Monday and it didn’t happen this week, your bins will be emptied next week. You can put out up to twice as much next week at no extra charge, the utility says.

Waste Management, which serves numerous areas in Western Washington including Kitsap, Snohomish and Skagit counties and parts of King County, has postponed or canceled residential waste pickup for some customers. For updates in your service area, see wmnorthwest.com.