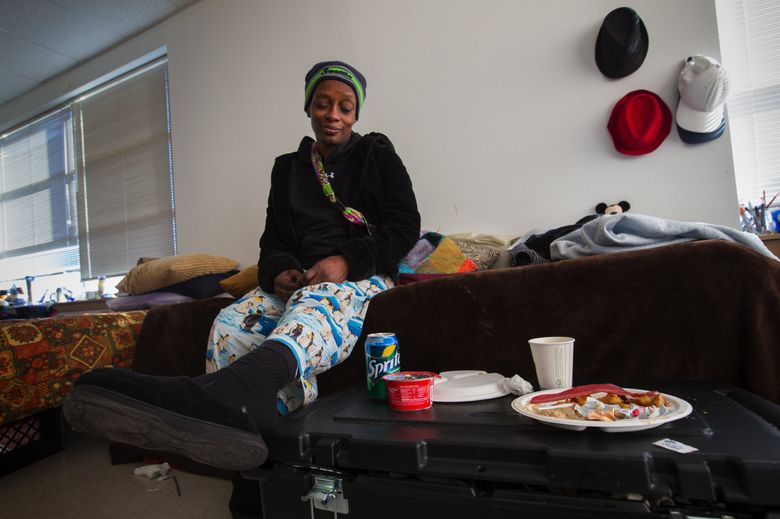 Jacqueline Martin sits on her bed and talks about life at the Navigation Center in Seattle, where she has been living since July. She plans to go to law school and to become a lawyer. (Ellen M. Banner/The Seattle Times)

A new Seattle homeless shelter is an important new strategy for moving people out of tent camps. But five months in, it is struggling to get them into housing.

Jacqueline Martin walked through the doors of Seattle’s Navigation Center the day the much-touted homeless shelter opened. The shelter promised a wide menu of resources and, hopefully, faster placements in housing for people like Martin, who previously lived in one of the city’s many tent encampments.

In her time there, the 54-year-old Washington native joined a women’s group, honed her skills as a public speaker for the Real Change Homeless Empowerment Project and remained focused on her dream of becoming an attorney.

But she, like most Navigation Center residents, has not achieved the shelter’s mission — finding housing. More than 150 days later, Martin is still living at the shelter, a stay more than twice as long as city officials say homeless clients should remain at the facility.

The Navigation Center is a new, critical link in Seattle’s strategy to move people out of homeless tent camps and into housing. Enhanced shelters like the Navigation Center are beginning to replace the traditional mats-on-the-floor model that dominated Seattle’s shelter system for years. They’re designed to be more attractive to people living in tent camps, with more lenient policies about who can live there.

But a few months into the Navigation Center experiment, that strategy is proving difficult to execute.

Navigation Center clients are, on average, staying longer than the 60-day limit agreed upon between the city and the Downtown Emergency Service Center (DESC), the nonprofit contracted to operate the facility.

Of the 118 people who’ve gone through the Navigation Center since it opened July 12, 41 percent have been there longer than 90 days. Only 13 left the shelter for housing.

DESC and city officials caution the center is still in its early stages and say they are working out the challenges together. They agree people can’t stay there indefinitely.

But they disagree on why clients struggled to exit into housing within the 60-day limit. DESC points to the city’s glaring lack of affordable housing in Seattle, a city of skyrocketing rents and home prices.

“The community needs housing for people,” said Daniel Malone, DESC’s executive director. “We can’t innovate out of the scale of the problem.”

City officials agree, but also note that DESC did not operate the Navigation Center fully staffed when it opened in the summer.

The Navigation Center’s performance will be an important yardstick as the city plans to invest $4.4 million in enhanced shelter beds next year. The shift is based on the theory that enhanced shelters, which have wraparound social services and case management, more swiftly direct people to permanent housing and open space for others.

It’s lost on no one, including Martin herself, that the Navigation Center is just the latest try-anything experiment in a city with a homelessness population that’s only getting bigger.

“It’s not perfect. It’s probably never gonna be perfect,” Martin said of the Navigation Center. “But what it is is a work in progress. Just like the people that are living here.”

The 75-bed Navigation Center occupies both stories of a nondescript former office building in the city’s Little Saigon neighborhood. Clients are referred here by the city’s Navigation Team, a collection of outreach workers and police officers who connect people living in homeless encampments to resources and shelter.

The building interior is mostly spare, except for a Christmas tree and festive decorations in the lobby. Recently, the artist Louie Gong held an art show there and decorated the building with work by different artists.

Among the resources for shelter residents are a small batch of computers and a bookcase filled by the Seattle Public Library. Next to the shelf rests a small, plastic bin — one of more than 50 containers scattered throughout the building where clients can dispose of hypodermic needles. The shelter permits but discourages substance use by shelter residents.

Rooms are smaller than in traditional shelters, so people have fewer roommates, said Jason Johnson, deputy director of Seattle’s Human Services Department. Residents can live with their partners, bring pets, store belongings and come in and out freely, 24/7.

Seattle modeled the Navigation Center after San Francisco’s facility of the same name.

San Francisco’s center opened in March 2015 without a time limit on how long clients could stay. But the longer the shelter was open, the longer residents stayed — some nearly 300 days. Eventually, the city capped stays at 60 days and allowed clients to move into other shelters if they need more time, said Sam Dodge, the city’s former homeless czar. The city also opened more Navigation Centers.

In copying the San Francisco model, Seattle felt its Navigation Center would achieve a faster turnaround of shelter beds than traditional shelters because of the multitude of resources offered, Johnson said. The shelter has at least three employees on shift at any given time, case managers and part-time mental-health and substance abuse counselors.

Why isn’t it working?

San Francisco’s shelter had a major advantage over its Seattle clone: San Francisco owned a supply of affordable housing and could set it aside for Navigation Center clients.

“We were being intentional when we first opened it to really show that anyone could be housed, if we focused on it and really problem-solved,” said Dodge.

Seattle can’t dedicate housing for its Navigation Center clients because it prioritizes the most vulnerable clients for housing, basing it on their need, and not the shelter where they are living, said Mark Putnam, director of All Home, King County’s coordinating agency for homeless services.

However, even being high on the prioritization list for housing in Seattle doesn’t ensure a person gets it quickly. One of the shelter’s first clients, high on the need-based priority list, waited 75 days.

The city points to another reason: DESC did not hire a mental-health and a substance-abuse counselor until the shelter had been open three months. Malone disagrees that has been a big problem: The rest of the staff was helping clients connect to housing and behavioral health care from day one.

Clients of the Navigation Center typically arrive after the city has shut down their encampment, and the staff says it takes time to build trust as they work through personal difficulties.

Martin has been homeless twice before, most recently in 2014 for about seven months. She eventually got a rapid-rehousing voucher and moved to an apartment.

She became homeless again a year ago, shortly after her son was charged in two high-profile shootings at Seattle encampments, one of them fatal. She decided to stop paying her rent and moved into an unsanctioned homeless camp under the Spokane Street Viaduct, intending to use the rent money to help pay her son’s legal fees.

She and her longtime partner share a room with seven other people and one dog. Beds are arranged around the room like tiles in a game of Tetris just before the blocks touch — very close quarters by any college dorm-room standard.

Like others at the Navigation Center, Martin needs new government-issued identification to get housing. The process can drag on for weeks or months, requiring clients to track down documents, sometimes from multiple jurisdictions.

San Francisco’s Navigation Center saw a similar problem and lobbied the state for a standing appointment at the Department of Motor Vehicles, cutting back on the time they spent waiting. Seattle’s shelter hasn’t done something similar.

Currently, DESC is allowing clients like Martin who’ve remained past the 60-day mark to stay. No one has yet been kicked out for busting the deadline, though Malone said the city may consider moving people into other shelters — as San Francisco has done — if they still haven’t found housing after six months.

But the city won’t adjust the 60-day length-of-stay limit “until there’s some analysis and evaluation with recommendations that points us in that direction,” Johnson said.

Researchers at the University of Washington are currently evaluating Seattle’s Navigation Center model, with a report due sometime next year.

Until then, the Navigation Center should be creative and look at options like rapid rehousing or even one of the city’s six, sanctioned homeless encampments, Johnson said.

Martin briefly moved to the Georgetown sanctioned encampment but didn’t like it and returned to the Navigation Center.

She doesn’t sound concerned about her looming move-out date in January, because she is confident she will find long-term housing. She hopes to get a rapid-rehousing voucher and an apartment of her own.

Yet, while shelter is not supposed to be a permanent home, that’s what the Navigation Center has become to Martin.

She recently braved the cold weather to meet up with friends she knew from her days on the streets. As the night wore on, it hit her: She had a place to go.