For the first time, Washington’s redistricting commission has blown its legal deadline to come to an agreement on new legislative and congressional district maps.

The failure of the bipartisan panel means Washington state’s election maps for the next decade — beginning with the 2022 midterms — will be in the hands of the state Supreme Court, which will have until April 30 to draw new boundaries.

The commission acknowledged its impasse Tuesday morning, after a marathon Zoom meeting the night before, which ended with the bizarre spectacle of the commissioners voting to approve new maps just before the midnight deadline.

By morning, it was clear the vote was a deception. The commission in a statement acknowledged “the four voting commissioners on the state redistricting commission were unable to adopt a districting plan by the midnight deadline.”

To muddle matters further, the commission then released a second statement Tuesday after 9 p.m., announcing an agreement on the maps – albeit after the deadline set by law. Those maps have been sent to the Supreme Court for consideration, according to the statement.

“These maps were created in a bipartisan process with unprecedented public input and resulted in the doubling of minority-majority districts, greater consolidation of cities, counties and communities of interest, and full consideration of the eight Tribes with which the commission consulted,” said Commission Chair Sarah Augustine in the statement. “The WSRC staff and I are at the disposal of the court for anything they may require as it assumes responsibility for this important task.”

It was quite the whiplash from Monday’s meeting. The maps that ostensibly had been agreed upon Monday night were never publicly released, and the voting commissioners — Democrats Brady Piñero Walkinshaw and April Sims, and Republicans Joe Fain and Paul Graves — spent most of the five-hour meeting huddled in private talks, emerging occasionally with vague updates.

In addition to failing to complete their task by the deadline, the commissioners’ conduct likely violated the state’s Open Public Meetings Act, which generally requires governing bodies of public agencies to make decisions in public, according to transparency advocates.

“It clearly seems as is if this was a deliberate attempt to essentially hide the discussions from the public,” said Mike Fancher, president of the Washington Coalition for Open Government, adding even if the commission somehow obeyed the letter of the law, “it was definitely a violation of the spirit of the law.”

Under state law, at least three of the four partisan commissioners had until Monday to reach agreement on new boundaries for the state’s 10 congressional districts and 49 legislative districts — a decennial reapportionment that follows the U.S. Census.

The state’s bipartisan commission system, approved by voters in a constitutional amendment in 1983, had succeeded in reaching compromise maps in 1991, 2001, and 2011.

The 2021 commission did not achieve similar results, and offered little explanation Tuesday for what happened.

The four voting commissioners were appointed by leaders of the Republican and Democratic caucuses in the state House and Senate.

The commissioners canceled a news conference planned for Tuesday and neither the four voting commissioners, nor the panel’s nonpartisan chair, Sarah Augustine, nor the commission’s spokesperson, responded to repeated requests for interviews.

Behind the scenes, the commissioners had spent at least part of Tuesday engaging in shuttle diplomacy at a Federal Way hotel, meeting in groups of two in an attempt to avoid violating public meeting laws.

It remains unclear how exactly things fell apart. After Monday night’s vote, the commission sent a formal letter to the Legislature stating that its work had been completed.

But the commission members signed that document Tuesday morning, after the deadline. And no finalized maps were sent along with that message, according to Secretary of the Senate Brad Hendrickson.

There had been signs of serious remaining disputes in the weeks leading up to the deadline, with Democrats pushing for a majority Latino legislative district in Central Washington, touting a legal analysis saying it was required under federal voting-rights law, and Republicans looking to create advantages to chip away at the Democratic majorities in the Legislature.

In a way, the impasse outcome was a sign of the hyper-polarized political environment of 2021.

“It was really clear that there wasn’t an ability here to get to the middle and get to consensus on something. That’s what the process required,” said Tim Ceis, a former Seattle deputy mayor who served as a Democratic commissioner in the last round of redistricting in 2011, and negotiated compromise maps with Republicans, including the late U.S. Sen. Slade Gorton. 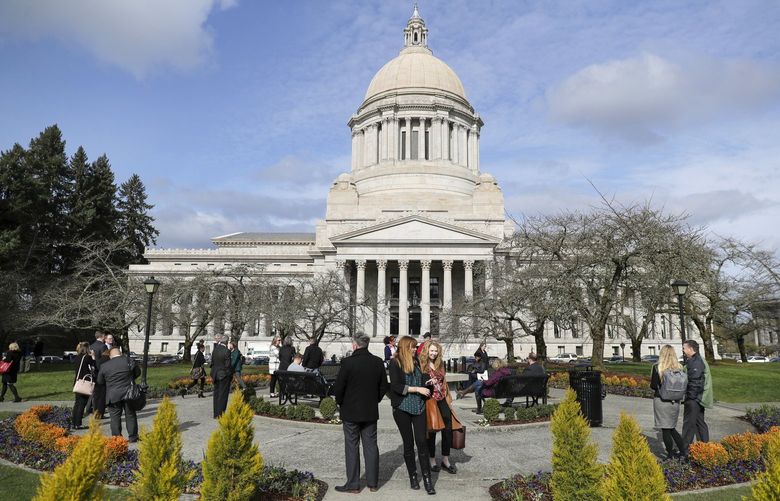 With the state Supreme Court generally regarded as liberal — with many of its members appointed by Gov. Jay Inslee — there was a sense among some Democrats that the justices might be favorably inclined to the party’s desired outcomes.

In a statement, Senate Majority Leader Andy Billig, D-Spokane, who appointed Walkinshaw to the commission, said the court would now have to “finish the job” and that “a majority Latino legislative district” was part of that work.

“I definitely was hoping we would have completed, valid maps today but since that did not happen, I am confident that the court will effectively and fairly finish the job,” Billig said.

Andrew Hong, lead organizer for Redistricting Justice for Washington, a progressive coalition that had pushed for the majority citizen voting-age Latino legislative district — said it was “unfortunate” that the Republican commissioners did not agree to such a plan, “and showed no intention of doing so throughout the process.”

Randy Pepple, a longtime Republican political consultant, said Democrats had little incentive to compromise given the makeup of the court and the polarized political environment. “The Democrats entered into this as they have across the country — looking at a liberal judiciary as better than cutting a deal with Republicans,” he said.

Still, Ceis and Pepple said the court presents somewhat of a roll of the dice for both parties — and especially for legislative incumbents who might get drawn out of their districts by a court that doesn’t value incumbent protection in the same ways as partisan commissioners.

“I think you have to start from the premise that the Supreme Court, while it has a liberal bent to it, it’s not a partisan bent necessarily,” said Ceis. “My guess is they’re going to go out of their way not to favor one party or the other. It’s going to be fascinating to watch.”

The missed deadline is at least likely to cause headaches for incumbents and potential candidates as they await the state Supreme Court’s action.

Compared to prior attempts at redistricting, the commission was squeezed for time on both ends, said Sen. Sam Hunt, D-Olympia.

Second, lawmakers in 2016 proposed an amendment to the state constitution to move up the commission’s deadline to Nov. 15, from the end of the year. That amendment passed the November 2016 election with more than 77% of voters in favor. Supporters argued the change would ensure the new maps were adopted before the holidays, allowing more public feedback.

“I certainly understand the pressure they were feeling,” said Hunt. “Obviously it’s not an easy thing to do.”

But the commission’s performance Monday night drew widespread condemnations from many political observers who were watching the public meeting, only to see little discussion take place in public.

“If a local government did anything like this the Legislature would spend months scolding every city and county across the state for months. This is a complete joke,” tweeted Pierce County Council Chair Derek Young.

Andrew Villeneuve, founder of the Northwest Progressive Institute, said in an email “the Commission failed to do the public’s work in public and didn’t even accomplish its objectives in private. Instead of owning that failure as the final seconds ticked by, the Commission seemingly tried to buy itself more time to produce something by indefensibly voting to adopt maps that the commissioners knew did not exist.”

It’s uncertain how the deadlock will play out before the court. The court could consider, and perhaps approve, the maps that the commission submitted after blowing its statutory deadline.

The court could also go ahead and draw its own maps, Hunt said, citing an example from 1972. In that instance, after the lawmakers deadlocked, a federal court appointed a University of Washington geography professor as special master to oversee the task.

Meanwhile, the commission’s potential violations of the state’s open-meetings law already has spurred a lawsuit, filed in Thurston County Superior Court on Tuesday by Arthur West, an open-government activist.

West’s complaint called the commission’s behavior “a sudden, deliberate, unprovoked and dastardly attack” on the public’s right to be informed of government actions.