Alejandra Pérez was so sure the Supreme Court was going to allow the Trump administration to end the Deferred Action for Childhood Arrivals program that she and a group of friends planned a “wellness check-in” for the evening so they could process their feelings and heal.

Instead, the Kent DACA recipient was stunned to find herself overjoyed by the Thursday morning decision, which held, 5-4, that President Donald Trump did not provide a reasoned explanation when he announced an end to the program three years ago.

“I was literally in disbelief,” Pérez said, recalling waking up to a text of a screenshot announcing the decision on the Supreme Court blog. After a series of blows to immigrants in recent years, she said, “the chances were so small.”

The ruling on the Obama-era program, allowing immigrants who came to the U.S. as children to live and work here legally, will affect roughly 16,000 DACA recipients in Washington and 650,000 in the U.S.

Jorge Barón, executive director of Northwest Immigrant Rights Project (NWIRP), said he was pleased but cautioned the ruling does not mean recipients can forever rest easy. “The big question is how the administration is ultimately going to respond.”

The president could immediately turn around and attempt to end the program again with a better explanation and more thorough process. And Barón, who was still digesting the 74-page decision, said it’s not clear whether the ruling would allow new applications for the program, though he believed technically it should. 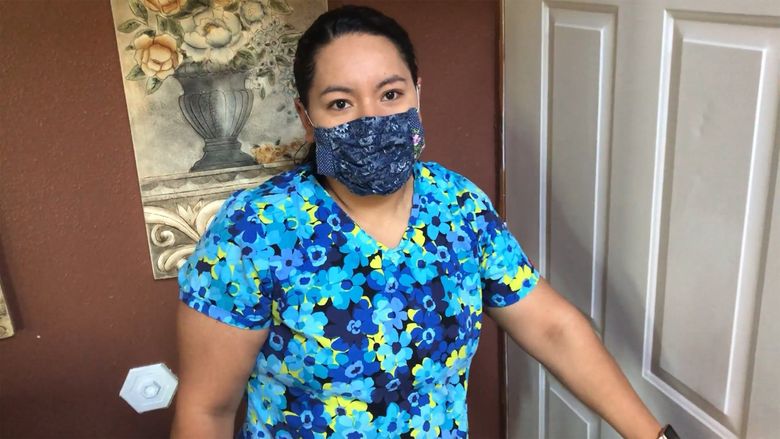 More analysis will come, as well as efforts for permanent, legislative action, DACA proponents said. The program only allows for two-year, renewable permits. Many want Congress to pass a law offering a path to citizenship, not just for young immigrants but for their parents and others who are undocumented.

In a mostly feel-good, televised chat between Gov. Jay Inslee and DACA recipients, some pressed the governor on steps they want him to take to support all undocumented immigrants, including establishing a $100 million relief fund for those affected by COVID-19 and urging presumptive Democratic presidential nominee Joe Biden to commit to ending deportations. Inslee, saying he had another appointment related to the pandemic, put on his mask and left the room as the questions continued.

Still, it was a mostly celebratory day among immigrants and advocates. “For now, just today, for the first time in three years, we can breathe a little easier,” said Seattle DACA recipient Graciela Nuñez.

Some conservatives criticized the ruling, which they said was making law rather than interpreting it. “Do you get the impression that the Supreme Court doesn’t like me?” Trump tweeted. The court went against his administration earlier this week in a 6-3 ruling preventing LGBTQ employment discrimination.

But local officials and other leaders, from the governor to bishops in the Archdiocese of Seattle, weighed in with praise. The more political among them knocked Trump in the process.

“We have long believed what he did was illegal,” said Inslee during his televised chat, who called the ruling a “big win for the state of Washington.”

“Dreamers make our communities better and stronger places to live,” said state Attorney General Bob Ferguson, using a popular name for DACA recipients. “Thanks to today’s decision, they can continue to live and work in what is for many of them the only home they’ve ever known.”

Ferguson and 15 other attorneys general had filed one of several challenges to Trump’s attempt to end DACA. Their case was consolidated into one of three cases before the Supreme Court decided Thursday.

Microsoft, which has 62 DACA recipients on staff, was also a plaintiff in one of the cases. President Brad Smith called the ruling a “victory.” In a blog post, he wrote, “Our plea is for a national discussion that involves more light and less heat.”

DACA recipients work in all kinds of jobs in addition to tech. Some are frontline health care workers who are on the job during the current novel coronavirus pandemic, and their ability to continue doing their jobs was the focus of one brief submitted to the court.

“I am so thankful that, for the moment, I don’t have to stress about losing my work permit or face the possibility of deportation,” said Jessica Esparza, one of two DACA recipients workings as ICU nurses at Confluence Health’s Central Washington campus.

Urania Mendoza Martinez, who because of DACA went from working in the fields of Eastern Washington to becoming a certified nursing assistant and manager for an adult family home, said her 14-year-old daughter was especially excited upon hearing the news. The girl had been worried about her mom being sent back to Mexico.

Nuñez, 25, is policy aide to King County Councilmember Girmay Zahilay, and before that worked for a variety of unions, including the Teamsters. She said she came to the U.S. from Venezuela when she was 7, driven out with her family by the turbulent administration of former President Hugo Chávez.

Pérez, also 25, is manager for a education nonprofit that works to ensure equity for students in South King county.

The Guatemalan native said she arrived in the U.S. when she was 12, and was approved for the DACA program when she was 18. Like many, she said, the program made a tremendous difference in her life.

“It meant I could have a job on campus,” she said, as well as the job she currently holds.

It also meant she could get a loan much more easily. With her brother, also a DACA recipient, she now owns a house.

Pérez is also an organizer with the Washington Dream Coalition, and she said Thursday’s ruling will strengthen the fight for comprehensive legislative action.

A coalition of groups advocating for DACA released a statement making a number of demands. In addition to the $100 million COVID relief fund, the coalition, which expressed solidarity with the Black Lives Matter movement, called for the release of protesters jailed following the killing of George Floyd as well as of immigrants held at the Northwest detention center in Tacoma. The coalition also demanded funding cuts to police and immigration enforcement.

Zawadi Chege, a 20-year-old who came to the U.S. from Kenya when she was a year old, said fear is a common denominator for people like her who don’t have any protection at all. Speaking at an afternoon news conference put on by the coalition, she said she applied to the DACA program just as Trump was trying to end it, and was denied.

“It’s time for the governor to step up,” added her brother, Kamau Chege, who is a DACA recipient and was one of two who sharply questioned Inslee.

The wellness check was still scheduled to go on later that evening, but it was now certain to take on a tone of joy and resolve.