In this, they are not unique. Lots of people don’t like the Electoral College, which has led to the last two Republican presidents winning office despite finishing second in the popular-vote count.

But Chiafalo and John actually have a plan to blow it up, a plan that has advanced all the way to the U.S. Supreme Court.

The hitch: It’s a long shot. And, if they only get halfway through the plan, as seems very possible, it has the potential to throw the 2020 election into chaos, granting immense power to choose the next president to 538 unaccountable, virtually anonymous officials. 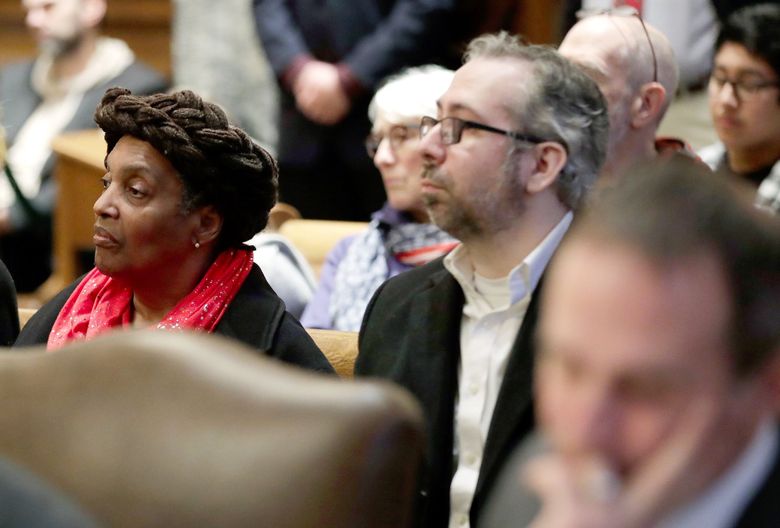 Chiafalo and John were two of Washington’s “faithless electors” in 2016. Tasked with casting their Electoral College ballots for Hillary Clinton, who handily won Washington state, they refused. Now, they and a third faithless elector, are in a long-running legal battle to assert the right of presidential electors to vote for whomever they want for president, no matter what candidate their state’s voters choose.

In 2016, Chiafalo, John and Levi Guerra, in a last gasp attempt to stop Donald Trump from assuming the presidency, cast their Electoral College ballots not for Clinton, but for former Secretary of State Colin Powell, hoping they could persuade Republican electors to abandon Trump and settle on a moderate Republican.

And, since all Washington’s electors had signed a pledge to support the candidate that got the most votes, Chiafalo, John and Guerra were fined, under state law, $1,000. (Guerra, 23, of Grant County,  has since joined the Marines and could not be reached for comment. A fourth Washington elector, Robert Satiacum, also did not cast his vote for Clinton, but, although he has yet to pay his fine, he did not appeal it.)

For three and a half years, they have been fighting that fine through the court system. On Wednesday their battle will reach the highest court in the land. At stake is much more than a $1,000 fine. Rather, it’s a question that’s never been definitively answered in the more than 230 years since the Electoral College was created: Can presidential electors vote for whomever they want, or can states ensure that they follow the voters’ will?

Washington’s Legislature, after the 2016 election, made its law stricter still: No longer would “faithless electors” be punished with just a $1,000 fine. Now, under state law, electors are removed and replaced with an alternate if they do not cast their vote for the candidate who won the state. A similar law in Colorado will also be considered by the Supreme Court on Wednesday. Thirty-two states plus the District of Columbia require electors to vote for the candidate that voters chose, although most of those states have no mechanism for enforcing their law, according to FairVote, a nonpartisan electoral reforms group.

Arguing on behalf of Washington, Attorney General Bob Ferguson writes that if the three faithless electors prevail, it would “profoundly undermine public confidence in the value of participating in our democracy.”

If states have no authority over electors, Ferguson writes, electors could sell their vote or do the work of a foreign power, and they could not be removed.

“These 538 individuals are empowered to implement the people’s will, not to thwart it,” Ferguson writes in his brief to the Supreme Court. “Theirs are not the only votes that matter.”

But, he says, that’s the Constitution we’ve got.

His plan: Step 1: The Supreme Court rules in his favor, stating explicitly that electors can vote however they want. Step 2: People view this ruling, and the Electoral College, as absurd and there’s a popular uprising to change the Constitution, ditch the Electoral College and embrace the national popular vote as a better method for choosing a president.

“I believe that if we win, the American people will be forced to see what the Electoral College truly is, which is undemocratic, they will demand it be removed and replaced with the popular vote,” Chiafalo said. “People will rage against the electors who did this and say ‘you guys are undemocratic, you guys are breaking the system.’ No, we’re just following the Constitution, and if you’ve got a beef with this, we’ve got to change the Constitution.”

But there is a big leap between step one and step two. It’s not easy to change the Constitution. And Republicans may feel they have no political imperative to ditch a system that’s favored them.

“Making the system work worse in the service of that goal seems to be problematic, because getting the Constitution amended right now to get rid of the Electoral College is almost inconceivable,” said Paul Smith, vice president of the Campaign Legal Center, a nonpartisan group that’s filed an amicus brief with the court, arguing against Chiafalo’s position. “The ‘blow it up so people get rid of it’ strategy is pretty risky.”

Smith imagines a nightmare scenario unfolding in the six weeks between Election Day and when the electors cast their ballots in mid-December: A close Electoral College result, something like the 271-266 tally that George W. Bush won by in 2000, would make each elector’s vote critical.

And, since neither campaign finance law nor federal ethics laws apply to electors, it could be a free for all, Smith said, with electors being offered money, gifts or other untoward rewards to change their votes.

“Once the Supreme Court has endorsed the idea that they’re free agents,” Smith said, “maybe they have a financial stake, maybe they get a big gift, any of those things could happen.”

Alexander Keyssar, a historian at Harvard’s Kennedy School, said such a situation is unlikely and that if the Supreme Court gives its blessing to the concept of “faithless electors,” political parties will likely be much more scrupulous in how they choose electors.

“There’s never been an election in which a faithless elector decided the outcome,” said Keyssar, the author of a forthcoming book titled “Why Do We Still Have the Electoral College?” “But as we’ve learned in recent decades, all sorts of things that have never happened can happen if they’re constitutionally permissible.”

Jason Harrow, chief counsel for Equal Citizens, the nonprofit group that’s representing Chiafalo, John and Guerra for free, said the real risk of chaos is in leaving the issue undecided. Imagine, for instance, if an elector went rogue, swinging the election, and the Supreme Court had not already weighed in.

“The worst case scenario is for this quirky little issue to be decided in December of a presidential year,” Harrow said. That’s what happened in 2000, with Bush v. Gore, when the Supreme Court, divided on partisan lines, settled the election for George W. Bush.

“Whatever happens here,” Harrow said. “It won’t define an election.”

For John, a long-time Seattle social justice activist, the potential ramifications of the Court’s decision aren’t the point. She voted for Powell in 2016, because “I promised I would do my best to save the Republic.”

John, 68, said she felt some qualms about disregarding the will of the voters, but “my neighbors chose me to make this decision…I went to Harvard, I feel like I have a right to do something like this.”

Correction: This story has been updated to note that Bret Chiafalo works for a tech contracting company, not for Microsoft.