Washington Sen. Patty Murray missed a high-profile vote Friday on creating a bipartisan commission to investigate the Jan. 6 insurrection at the U.S. Capitol by supporters of former President Donald Trump.

In a statement, Murray said she had to fly home Friday morning for “a personal family matter.” She provided no further details.

Sen. Maria Cantwell voted for the commission, lining up with Democrats and six Republicans.

Murray’s vote would not have altered the outcome Friday, as Senate Republicans blocked the Jan. 6 probe with a filibuster.

The Senate vote was 54-35, six short of the 60 votes needed to take up the bill, which would have created a 10-member panel evenly divided between the parties.

A Democrat who is seeking a sixth term in 2022, Murray had publicly supported the commission, and earlier this year recalled her own harrowing experience on Jan. 6, when she hid with her husband in an office near the Senate chamber as rioters banged on the door, trying to break in.

In comments this week, Murray blasted Republicans who have shrugged off the events of Jan. 6, when a mob roamed the Capitol trying to halt certification of the 2020 presidential election.

“We all know downplaying the seriousness of the insurrection we witnessed ourselves is just plain denial,” Murray said. 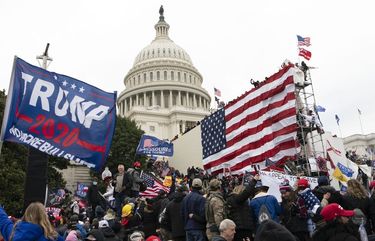 Murray was among 11 senators who missed the Senate vote, and one of only two Democrats (Sen. Kyrsten Sinema, of Arizona, also skipped the vote). It was a rare Friday vote for the Senate.

Helen Hare, a Murray spokesperson, said she could not provide any more details about Murray’s personal reasons for missing Friday’s vote.

“As you can imagine, given her experience that day and her focus on accountability for those involved, this was obviously a vote that was personally important to her and one she really wanted to be there for,” Hare wrote in an email.

Friday’s vote may not be the final say on the commission. Senate Majority Leader Charles Schumer, D-N.Y., said he could force a repeat vote, according to The Hill.