Technically, Seattle elections are nonpartisan. But they sometimes resemble a team contest anyway, with a group of more progressive or left-wing candidates pitted against a group of more conservative or moderate candidates.

This year, some City Hall watchers say the phenomenon is more evident than ever, while others say the races for mayor, City Council and city attorney shouldn’t be lumped together.

Leading up to the Nov. 2 general election, left-lane candidates are mostly embracing the idea that they share aims, like taxing large corporations and moving police resources to alternative strategies and social services.

Several opponents, despite shared interest in hiring police officers and keeping parks clear of homeless encampments, are more wary about being viewed as a bloc. 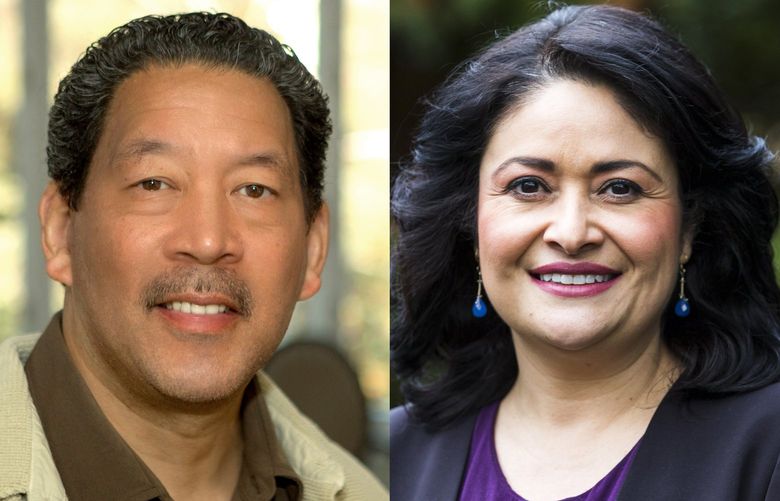 None of the eight candidates have formed official slates, but political groups, labor unions, business groups and editorial boards are picking lineups.

The Nov. 2 electorate will be larger, adding new voters to the mix. In a Crosscut/Elway poll of likely Nov. 2 voters last week, respondents named homelessness and policing as the most important issues.

“There’s been an increasing divide in Seattle politics and across the country” between further-left progressives and business-conservative Democrats, Conrad said.

Former Councilmember David Della supports Harrell and Nelson, but he doesn’t view himself as siding with a particular slate.

“You have this middle group of people who don’t identify with the progressive camp or the conservative camp,” but instead want component governance, he said.

Conrad hopes her preferred candidates will sweep the election so they can work together to rein in housing costs and address climate change. Della says each race may hinge on who voters trust to handle basic services and make them feel safe.

In 2019, when the council’s seven district seats were up for election, independent spending by interest groups contributed to the perception that voters had to take sides.

In 2021, a similar picture is shaping up, said Nicole Grant, executive secretary-treasurer for MLK Labor, which sends a mailer to voters each election with a list of endorsed candidates. Hotel worker and supermarket worker unions funded a pro-González PAC in the primary, and real estate executives made large donations to a pro-Harrell PAC.

“Definitely, this year is a slates year,” Grant said. “You can follow the money and see a clear delineation between business candidates and community candidates.”

While González has coordinated only with her colleague Mosqueda on the campaign trail, “I certainly share values” with Oliver and Thomas-Kennedy, as well, she said.

“There are very clear divisions on policing, progressive taxation and social justice” between those candidates and opponents “supported by status quo corporate interests,” González said.

González endorsed incumbent City Attorney Pete Holmes in the primary, rather than Thomas-Kennedy, who wants to halt many misdemeanor prosecutions. But she and Thomas-Kennedy are among those who believe in “harm reduction” rather than “punishing the poor,” she said.

While Oliver hasn’t endorsed other candidates, they hope their supporters will “think about why they’re voting for our campaign” as they eye other races.

“It would be nice to have a mayor who would actually cash the checks and back the policies” adopted by the council to combat the city’s housing woes, Oliver said.

The left-lane candidates don’t agree on everything, said Thomas-Kennedy, adding, “I know my platform makes some people nervous.”

But Thomas-Kennedy hears González, Mosqueda and Oliver talking about similar aims, she said. “There’s a lot of overlap,” she said.

Wilson is a political independent, he said, promising to bring a nuts-and-bolts approach to the council. Still, his positions on policing and homeless encampments put him in a group with Harrell and Nelson, he contended.

“I think they’d like to see the enforcement of laws on the books,” he said.

Not everyone believes the “teams” in the Nov. 2 election are cut and dried, given that each race is unique.

State Sen. Jamie Pedersen said the mayoral contest is the “messiest divide,” because González and Harrell are closer politically than the other matchups. Both are Democrats, and they voted the same way much of the time on the council from 2016 to 2019.

Oliver isn’t a Democrat, hampering their ability to secure endorsements from some Democratic groups alongside González, Mosqueda and Thomas-Kennedy.

The race for city attorney is a wild card, because Thomas-Kennedy is running hard left, while Davison ran for state lieutenant governor last year as a Republican, Pedersen added. Some voters worried about City Hall veering left or right may split their support between the unofficial slates, he suggested.

Monisha Harrell, who manages her uncle’s campaign, also pushed back against the idea that voters will view all the candidates as progressive versus conservative.

Many will evaluate each race separately, with certain qualities more important in a mayor and others in a council member, she said, arguing Bruce Harrell holds appeal for voters across “shades of blue.”

Oliver and Bruce Harrell may disagree on some matters, but both are political “unifiers,” Monisha Harrell said. “You will find people who give Bruce democracy vouchers and give Nikkita democracy vouchers,” she said.

Seattle elections can seem partisan partly because The Seattle Times editorial board and The Stranger usually endorse opposing candidates, Monisha Harrell said (the news operation at The Times is independent from the editorial board).

But many races boil down to style and experience, she added, predicting Bruce Harrell’s out-and-about campaigning will carry the day.

When voters ask Nelson whom she supports for mayor, she calls Harrell “a better option.” But she has no interest in running on a slate, she said.

“My campaign is enough for me to worry about,” Nelson said.

Davison voiced a similar take. The next city attorney will need to defend Seattle’s policies in court, whether advanced by González or Harrell, she noted.

“I stand for the things I stand for,” said Davison, who has called for the city to step up some prosecutions. “That should be the only thing that voters look at.”