He raised more than $1.2 million and spent more on yard signs, T-shirts and Porta Potties than on traditional radio and TV ads on his way to a second-place finish, ahead of rivals that included initiative sponsor Tim Eyman.

But as attention shifts toward the Nov. 3 general election, Culp starts as an underdog as he strives to break a streak of nine GOP losses in gubernatorial races stretching back to 1984.

The race pits Inslee, the two-term governor and former congressman who has spent much of his life in political office, against Culp, a first-time candidate and police chief of Republic, a town of 1,100 in Eastern Washington’s Ferry County.

With 36 candidates on the ballot, Inslee received about 50% of the statewide vote in the Aug. 4 primary, compared with 18% for Culp.

The prospect of Culp and President Donald Trump at the top of the Republican ticket has Washington Democrats salivating over a widespread repudiation of the GOP this fall. Some Republicans, too, have expressed worry about a November disaster, but contend Inslee has growing vulnerabilities that Culp can exploit.

The basic contours of the gubernatorial showdown are already forming, with Inslee’s response to the COVID-19 pandemic front and center.

“I view it as respecting people’s rights to be in charge of what they do in their lives. I don’t think it’s the government’s role to tell people what to wear and what not to wear,” he said in a phone interview Friday.

If elected, Culp said he would immediately end Inslee’s COVID-19 restrictions — allowing all schools and businesses to reopen.

Widespread shutdowns, he says, are a destructive overreaction. “We have less than 1% of people who die from this virus,” he said.

(In Washington, about 2.7% of people with confirmed infections have died, a total of 1,653 persons as of Thursday, according to the state Department of Health.)

Inslee’s campaign said in a statement Friday the governor’s management of the pandemic has been guided by science and has shown success. “The governor urges all Washingtonians, including our opponent, to follow the advice of health experts by following guidelines and wearing a mask to protect one another,” the statement said.

In an interview Tuesday, Inslee said he was happy “most Washingtonians are masking up big time.” He criticized his GOP challengers, including Culp, for “following in the Trumpian view that has so ravaged our nation.”

In addition to trying this fall to reverse their gubernatorial losing streak, Republicans are trying to chip away at Democratic majorities in the state Legislature, and their two remaining statewide elected officials, Secretary of State Kim Wyman and Treasurer Duane Davidson, are hoping to fend off well-funded Democratic challengers. 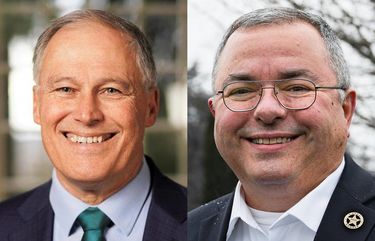 Culp, 59, has spent the past four years as police chief of Republic, a former mining and timber town in Ferry County, a sparsely populated forested expanse that runs from the Columbia River to the Canadian border near Washington’s northeastern corner.

The police chief title is perhaps misleading at this point as Culp is also Republic’s only police officer. There used to be three, but budget cuts reduced the force.

To campaign, he has been taking accrued vacation time from the job, which pays $31.77 an hour, according to the town treasurer. The Ferry County Sheriff’s Office is patrolling Republic in his absence.

Culp joined the Police Department in 2010, making a career change at age 49. He had run a construction contracting business for two decades in the Olympia area after serving as a sergeant in the Army.

On the campaign trail, Culp’s message has been straightforward: He views the U.S. and state constitutions as his guide and doesn’t intend to comply with or enforce laws he believes are unconstitutional.

That includes Inslee’s executive orders on mask wearing. Culp says he is “not anti-mask” and wears one when he enters businesses that require them. “It should be between the business owner and their customers,” he said.

Culp said he’s ready to debate Inslee and said more and more voters are getting fed up with the governor’s mandates.

Culp rose to prominence among gun-rights advocates two years ago, when he declared he would not enforce Initiative 1639, the voter-approved measure that raised the age to buy semi-automatic rifles in Washington from 18 to 21 and imposed other new gun restrictions.

That led to national media attention, including repeated appearances on Fox News, and Culp wrote and promoted a book, “American Cop,” about his views.

No court has ruled that I-1639 violates the state or federal constitutions, though a federal case is ongoing. Culp said in the phone interview, “I don’t need to wait for a coequal branch of government to tell me something, when I can plainly read it myself.”

Culp compared refusals to enforce what he views as unjust gun laws to civil rights leader Rosa Parks’ famous 1955 refusal to give up her seat on a bus to a white man.

He also compared police unquestioningly enforcing gun laws to police and military officials in Nazi Germany who “arrested Jews and put them in concentration camps because it was the law.”

To have any chance of making the gubernatorial race competitive, Culp will have to make inroads among Puget Sound area voters. That’s especially true in King County — home to 1 in 3 registered voters — where he received just 5% of the primary vote, compared with Inslee’s 69%.

“If I were a Republican leader in Washington, I would be very concerned for the long-term future of the party,” Fincher said. “You have some of the people who have been on the bench and assumed to be in line for greater leadership just not wanting to participate.”

(Among those who took a pass were Dave Reichert — the former congressman and former King County sheriff — and Pierce County Executive Bruce Dammeier.)

Some longtime state Republican leaders have signaled anxiety over how the top of the ticket may harm the GOP in 2020, noting Culp’s inexperience and lack of vetting that candidates typically undergo because they have run in past elections.

Reed said Culp reflects where the bulk of GOP voters stand now. “He fits in better with Donald Trump than the other candidates would have,” he said.

While he didn’t personally back him, Reed called Culp’s primary campaign impressive and said he clearly connected with many voters. “I expect him to do better than most people anticipate,” he said.

Randy Pepple, a Republican consultant who managed McKenna’s 2012 campaign for governor against Inslee, acknowledged, “Clearly, having Donald Trump at the top of the ticket hurts all Republicans in Washington state.”

But Pepple said Inslee’s primary showing was not impressive for a two-term incumbent.

“The reality is this is a referendum on Jay Inslee,” he said. “The whole key is whether Loren Culp can raise the money to keep the focus on Jay Inslee’s record.”

Inslee, 69, is seeking to become the first three-term Washington governor since Republican Dan Evans in 1972. His reelection bid comes after spending much of last year in an unsuccessful, climate-focused bid for the Democratic presidential nomination.

As he has sought to slow the COVID-19 pandemic in Washington, where the deadly virus first surfaced in the U.S., Inslee has repeatedly ripped Trump’s response to the pandemic. In April, he blasted the president’s calls to “liberate” states from stay-home orders, accusing him of fomenting “insubordination” that would cost lives.

Culp has explicitly embraced that term. He called his primary night rally in Leavenworth on Tuesday, where bands played and a crowd of hundreds gathered, his “Insubordinate Victory” party.

He praised the Trump’s “America First” agenda, which he said has taken on unfair trade deals and stood up to China. “How can anybody be against that?” he said.

Trump received 38% of the vote in Washington four years ago, and recent polls show him even less popular this year, but Culp said the president can win.