OLYMPIA — Gov. Jay Inslee Tuesday announced a statewide mandate requiring facial coverings in public to slow the spread of the new coronavirus, as cases again begin to rise in Washington.

And for Yakima County — which has nearly as many COVID-19 cases as the state of Oregon and where health care workers are struggling with the surge — Inslee ordered even more stringent requirements to make sure people cover their faces while at businesses.

In a news conference where he was joined by state Health Secretary John Wiesman and the presidents of Costco and the union UFCW 21, Inslee called the new orders imperative as economic activity increases.

“I think this is the way we need to look at this,” said the governor. “We just cannot wish this virus to go away. We have to use tools that are available to us that we know, that work.”

The statewide mandate — to be formally issued by Wiesman — requires people over the age of 5 to wear face coverings generally while they are in any indoor or outdoor public space.

Masks will not be required outdoors when people can stay more than 6 feet apart from each other, while indoors at home with others, or while alone in a vehicle.

While children under 5 are exempt, the order recommends kids between the ages of 3 and 5 wear facial coverings.

Also exempt from the governor’s order: people who cannot wear a mask for medical reasons, or people when they are communicating with someone who is deaf or hard of hearing.

And the order will recognize times when people can remove their masks, such as when they are eating at a restaurant, or engaged in a recreational activity either alone or with members of their household.

Violations of the statewide order are a misdemeanor, Inslee said, but “we don’t want to have enforcement of this.” 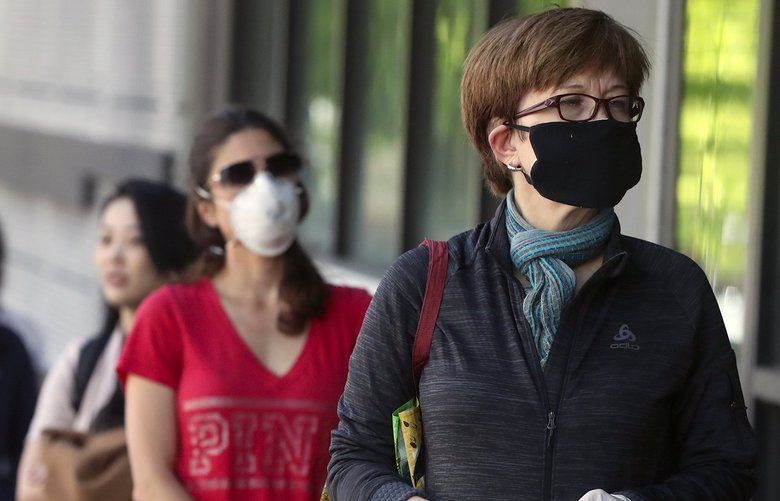 Mandates for facial coverings have caused concern among some Black men about racial profiling by law enforcement or as being seen as a threat for covering their faces. But Inslee urged residents to also weigh the risks of contracting the virus, which has disproportionately hit people of color.

“And given the ability to save somebody you love, or even a stranger that you’ll never meet, we hope that on the scale of things to think about, that that will be tipping the scales towards safety of everybody else around you,” he said.

For Yakima County, the governor announced an emergency proclamation that will specifically bar businesses from operating, or allowing customers to enter any business, unless customers cover their faces.

Businesses in Yakima County could face sanctions or the loss of their business licenses if they don’t comply with the new order, Inslee said.

Tuesday’s announcement was made as health officials try to get a handle on the increasing spread of the virus in the county of about 255,000 people.

Yakima County through the end of Monday had reported 6,435 cases of COVID-19, according to the state Department of Health. The county remains in the first and most restrictive phase of the state’s four-part reopening plan.

The update brings the state’s totals to 29,386 cases and 1,284 deaths, meaning about 4.4% of people diagnosed in Washington have died, according to the state Department of Health’s (DOH) data dashboard. The data is as of 11:59 p.m. Monday.

Inslee had earlier in the pandemic stayed away from issuing a facial-covering requirement. But on Tuesday, he said the outbreak in Yakima County and an increasing body of research on facial coverings swayed him.

In the news conference, Wiesman, the Health Department secretary, cited a review in the Lancet, a peer-reviewed medical journal.

Published earlier this month, the review of about 172 observational studies over how factors like physical distancing, face masks, and eye protection affect the spread of the new and other coronaviruses.

Analysis of 10 studies found that masks reduced the risk of transmission of coronaviruses from about 17% to 3%, according to a news release about the study, which did note limitations on the certainty of the evidence.

“… Solutions should be found for making face masks available to the general public. However, people must be clear that wearing a mask is not an alternative to physical distancing, eye protection or basic measures such as hand hygiene, but might add an extra layer of protection,” said Dr. Derek Chu, a co-author of the analysis and an assistant professor at McMaster University, in the news release.

“Masks take us a long way to prevent infection in other people and ourselves and to everybody coming together to defeat coronavirus,” said Baeten, who is also an infectious-disease physician.

The message from some scientists and public health experts about masks and face coverings has changed and evolved during the course of the pandemic, which Baeten acknowledged might be confusing or frustrating to people.

“Three months ago, we were all worried there weren’t enough masks in the country to keep our frontline workers safe and our hospitals open,” Baeten said, referring to medical-grade masks. “At that time, there wasn’t a mandatory push for masking, in large part, to make sure we didn’t have a run on masks that would have made all of us less safe.”

Now, supplies have improved and health officials better understand how the virus can spread from infected people without symptoms or those who have yet to develop them.

Not “the end of the world”

Several people hanging out in a park in Seattle’s Ravenna neighborhood Tuesday afternoon didn’t have strong objections to the new order.

Mary Kachel and Erin Sekulich, who were chatting on a picnic bench, said they thought the statewide mandate was a good idea.

“It doesn’t seem like much of a stretch than what we’re already doing,” said Sekulich, 45, though she added her mask made her feel “like [she] was wearing a political statement” when she recently made a trip out to Leavenworth, where the general public wasn’t as diligent about covering their faces.

Kachel, 42, said she didn’t think the statewide order was “the end of the world.”

“I think the science supports it,” Sekulich said.

David Rodriguez, 35, said he approved of the new order and he hoped it would target more rural communities, where outbreaks have recently gotten worse.

“I don’t feel like we’re in the clear,” Rodriguez said.

He added that he would be worried about the penalty of forgetting a face covering in public.

“It depends on how much a citation would be,” he said. “I’m not working now … But I think warnings are appropriate.”

For some Yakima business owners, it doesn’t matter whether they agree with Tuesday’s mask directive: They’ll follow it to ensure their business’ survival. Many businesses in the county won’t reopen until the infection rate falls.

“Businesses just want to be open,” said Melissa DeRosier, the owner of Nouveau Spa and Salon in western Yakima. The salon’s eight hairdressers are out of work, and DeRosier’s federal coronavirus aid is about to expire. “We’re afraid the whole valley will just be a ghost town. Some clients aren’t going to like it [wearing a mask], but if they’re going to want to get their hair done, they’re going to have to do it.”

That means that nearly 35% of Yakima residents aren’t covering their faces in public. Nestor Hernandez, the president of Yakima’s Hispanic Chamber of Commerce, said he sees a divide between how people behave when they’re on and off the clock.

“A lot of agricultural workers wear the mask at work but as soon as they get off work, it’s like everything is back to normal,” he said. “It’s hard culturally. Everyone’s anxious to be out shopping.”

Want major coronavirus stories sent to you via text message?
Text the word COVID to 855-480-9667 or enter your phone number below.