Skip to content
By
Daniel Beekman
and
Jim Brunner

Andrew Grant Houston isn’t a typical big-money candidate for mayor with decades-old connections and wealthy donors on speed dial. He’s 32, moved to Seattle only five years ago, supports defunding the police and has estimated his net worth as zero.

But Houston has raised about as much money as any other candidate ahead of the Aug. 3 top-two primary election, piling up hundreds of thousands of dollars.

Most of his donations have come in the form of “democracy vouchers,” which are funded by property taxes and which are being used in a Seattle mayoral race for the first time this year. Each resident can assign four $25 vouchers.

“I would say that without the democracy voucher program, I would not be able to run my campaign,” Houston said, noting the vouchers also give political power to people who would not normally be campaign donors.

Some candidates, like Houston, are particularly enthusiastic about the voucher program first used in City Council races in 2017. Others have expressed concerns about allegedly misleading pitches used to gather some vouchers.

Pretty much every mayoral contender has been collecting vouchers, though, so voters can expect a hypercompetitive race over the next two months. They also can expect independent political action committees to play a role.

“Everybody is going to have a lot of money,” partly because vouchers have leveled the playing field, said Michael Charles, a campaign consultant not working in the mayoral contest, which is wide open because Mayor Jenny Durkan isn’t seeking reelection. 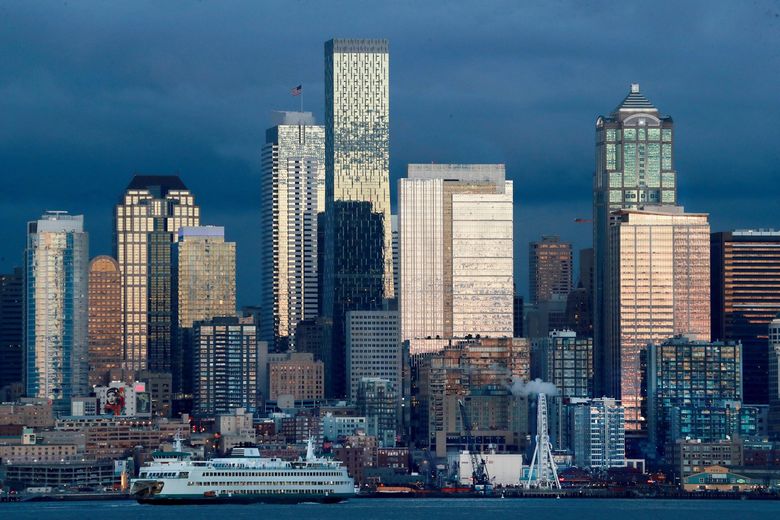 Here are the top contenders in the 2021 Seattle mayoral race

“That’s where the political strategy comes in,” Charles added. “You can have all the money in the world, but if your message isn’t right for the moment, people will vote for somebody whose message resonates.”

Fundraising numbers are a moving target, because campaigns can report contributions on a rolling basis. But snapshot data (reflecting donations filed with and reported by the Seattle Ethics and Elections Commission) from Friday show how the mayoral race is shaping up.

Colleen Echohawk, who recently stepped down as executive director of the nonprofit Chief Seattle Club to focus on her campaign, has raised more than $375,000, with about three quarters from vouchers.

“I’ve been overwhelmed by all the support,” she said, contrasting herself with opponents who have served on the council. “I think what this means is that people are ready for change.”

Houston, an architect and urban designer, has raised more than $320,000, with almost all of that coming from vouchers.

City Council President M. Lorena González has raised more than $273,000, with about two-thirds from vouchers. Echohawk, Houston and González started running in January and February.

No other candidates have reported more than $50,000 raised. That includes Lance Randall, who’s worked on economic development; Casey Sixkiller, who until recently served as a deputy mayor under Durkan; and Art Langlie, a businessperson whose grandfather was once Seattle mayor. Sixkiller and Langlie entered the race in May.

Seattle voters approved the voucher program in 2015 along with some other election law changes in a ballot measure supporters said was meant to help grassroots candidates and force candidates to interact with more ordinary residents, rather than people with a lot of disposable income.

The city mailed physical vouchers to every registered voter in February; residents can mail those in or assign their vouchers digitally, via the city’s website. Also, candidates and campaign workers equipped with blank replacement voucher forms can ask residents in person to sign those and hand them over.

The program takes $3 million every year in property taxes. To collect vouchers, candidates must agree to special limits on campaign contributions and spending. In the mayoral race, candidates using vouchers can accept only $550 per donor, including vouchers and cash, and spend only $400,000 before the primary.

What are democracy vouchers?

Certificates that Seattle residents can assign to participating candidates to help support their campaigns.

Which races are eligible for voucher funding in 2021?

Who can use vouchers?

You must be a Seattle resident; at least 18 years of age; and a U.S. citizen, U.S. national, or lawful permanent resident.

How do I get my vouchers?

How do I get replacement vouchers?

You can request replacement vouchers on the program’s website or by calling 206-727-8855. You can ask to have paper vouchers mailed to you or to have an online code emailed to you.

Can I give all my vouchers to one candidate?

How do I assign my vouchers?

Democracy vouchers may be returned directly to a campaign, returned to the Seattle Ethics and Elections Commission, or dropped off at designated locations. You can learn about all the options on the program’s website.

What happens if I do not use my vouchers?

If you don’t use your vouchers, the funds will roll over to the next election cycle.

Can I give my vouchers to someone else to assign for me?

No, your vouchers are assigned to you and only you.

Are my vouchers public information?

Yes, as with all donations to candidates, voucher assignments are public information and are published on the program’s website.

Before the city will convert vouchers into money for a campaign, a candidate must demonstrate viability by submitting signatures and cash contributions from a certain number of voters (600 in the mayoral race).

Program funds not spent during an election cycle roll over to the next cycle. The program had about $7.5 million in the bank heading into 2021.

In 2019, when the vouchers were used in the council’s seven district races, about 38,000 residents assigned about 147,000 vouchers, and candidates redeemed about $2.5 million from vouchers.

This year, with vouchers in use for the mayoral race, the race for city attorney and two citywide council races, more residents are using the city’s online portal to assign their vouchers, said René LeBeau, the program’s manager.

“We’re seeing 25-30% of vouchers being submitted online,” LeBeau said. “It’s exciting that technology work, because the vouchers get processed immediately.”

More than 51,000 vouchers have injected about $1.2 million into campaigns already in the 2021 election cycle.

During the primary, mayoral candidates can no longer redeem vouchers once their campaigns have raised $400,000 total. Houston and Echohawk are at that point now. Additional vouchers they collect may be redeemed during the general election, if they advance.

The mayoral candidates are using various strategies to drum up vouchers. Echohawk said her campaign has relied almost entirely on social media, emails and word-of-mouth, without having to visit or call residents much.

Will Casey, a spokesperson for Farrell, said her campaign is focusing not only on vouchers but also on small-dollar cash donations that allow supporters to contribute repeatedly, he said.

Like Echohawk, Farrell has been soliciting vouchers via social media and emails. Her campaign also is going to start going door-to-door, partly because many people are still unfamiliar with the program, Casey said.

“It really requires a substantive interaction,” he said.

That’s also Harrell’s view. An attorney who worked in telecommunications before serving on the council, he could probably raise plenty of money for his campaign without vouchers. But Harrell said he sees collecting vouchers as a way to connect with potential voters.

On a recent weekday, he and some volunteers set up a table outside the Grocery Outlet in the Central District for that purpose .

The candidate said he’s seen “a lot of voter confusion” over vouchers, with many people saying they’ve lost the copies they were mailed. He also pointed to complaints of other campaigns misleading residents about the vouchers.

“I think the [Seattle Ethics and Elections Commission] needs to take a good look at what tactics are being used,” Harrell said.

In early May, The Stranger reported that a man identifying himself as “Tyler” had been gathering vouchers for Houston on the street while telling passersby the vouchers were “to help the homeless.” Riall Johnson, a campaign consultant for Houston whose firm has been paying voucher canvassers, said he doesn’t condone misleading tactics and hasn’t employed anyone named “Tyler.”

Someone apparently tagged along to help a Johnson canvasser, the consultant said. The Houston campaign hasn’t submitted vouchers that person collected, the campaign said. “I can’t have people making fake pitches. It’s a fireable offense, immediately. I can guarantee you I didn’t train that person,” Johnson said, describing the allegations as an effort to undermine a surging grassroots campaign.

Paying a team to collect vouchers has provided young people of color who were financially struggling with crucial income and meaningful work, Johnson said.

“It’s an assembly line today. That’s what I like to call it,” said Brown, who gets paid a commission on each valid voucher. He earned $15,000 in two months gathering vouchers for Houston’s campaign.

Many people who stopped to sign vouchers didn’t know much about the program but were quickly convinced by Brown’s compelling pitches.

Scott Barber, a 43-year-old marijuana farmer, signed over $100 in vouchers. He was unfamiliar with the voucher program but wanted to support a candidate who favors drug decriminalization. Without the vouchers, Barber said, he probably wouldn’t have made a political donation. “I think it’s great,” he said.

The elections commission will consider new rules for voucher canvassing at its June 2 meeting. The rules would require canvassers to identify their role with a sign or badge and verbally. Campaigns would need to list where, when and by whom vouchers were collected. Houston said he has no problem with those changes.

Fundraising is only half the battle, said Heather Weiner, a campaign consultant for González.

“The most important thing about fundraising to me is how you spend the money,” she said, noting that the González campaign has been using volunteers to collect vouchers at farmer’s markets.

“The way I think is: How much money can we raise and then how many contact per target voter can we make?” Weiner added, saying the campaign doesn’t want to waste time contacting conservative voters who dislike the council.

“Everybody is going to do mailers,” she said, referring to mailed campaign literature. The Harrell campaign is still deciding how much effort to spend “on the doors,” because some voters may be put off by visitors during the pandemic.

“I usually pride myself on wearing out a pair of shoes during a campaign. This year, we’re being cautious,” she said.

Charles, the consultant not working with a mayoral candidate, said he thinks in-person canvassing will pay off, despite the COVID-19 curveball. He pointed to City Council candidate Nikkita Oliver, who’s connected with a lot of voters because they’ve had supporters out knocking on doors every weekend.

All the mayoral contenders will have enough money to make noise, through mailers, television or other tools, Charles said. The wild card will be independent spending by political action committees, he said.

Such PACs, which have no contribution limits and can spend as much as they want, as long as they don’t coordinate with candidates, dropped $4.4 million into Seattle’s 2019 races. That was almost as much as the $5.1 million that all the candidates raised.

The only PAC registered now is Bruce Harrell for Seattle’s Future, with no donations reported yet. Independent money tends to flow when ballots are mailed out to voters, which will happen on July 14 for the primary.

Large corporations, labor unions and tribes have bankrolled PACs in the past. Harrell may benefit from business-friendly spending (though a ban on PAC contributions by corporations with foreign investors, adopted in early 2020, could dampen the influence of companies like Amazon), while González has secured union endorsements. Echohawk and Sixkiller would each be Seattle’s first Native mayor.

When a certain amount of PAC spending occurs, candidates using the voucher program can petition the elections commission to break the 400,000 spending cap. Casey, the Farrell spokesman, believes that will happen.

“We want to have as much cash on hand as possible” to compete at that point, Casey said. “It will be important for voters to pay attention to how much independent money comes in and from where.”