But as officers cleared people from the Capitol Hill Organized Protest (CHOP) zone near the Seattle Police Department’s East Precinct Wednesday morning and then faced off with protesters at a nearby intersection overnight, they deployed a 40-millimeter sponge round, pepper spray and blast balls, the Police Department said.

Lawyers for the protesters who won the court order are particularly concerned about the deployment of blast balls and are gathering evidence about the city’s recent uses of force to determine whether police violated the order, one of the attorneys said Thursday.

The Police Department and Mayor Jenny Durkan didn’t directly address Thursday how the weapon deployments Wednesday and overnight related to the court order, though a spokesperson for Durkan said the mayor supports the order.

“The mayor has concerns with the Seattle Police Department’s (SPD) initial use of force in response to the Black Lives Matter protests, which is why she quickly asked the city’s accountability partners — the Office of Police Accountability, the Office of the Inspector General and the Community Police Commission — to evaluate SPD’s crowd management tactics and provide a recommendation,” spokesperson Kelsey Nyland said in an email. 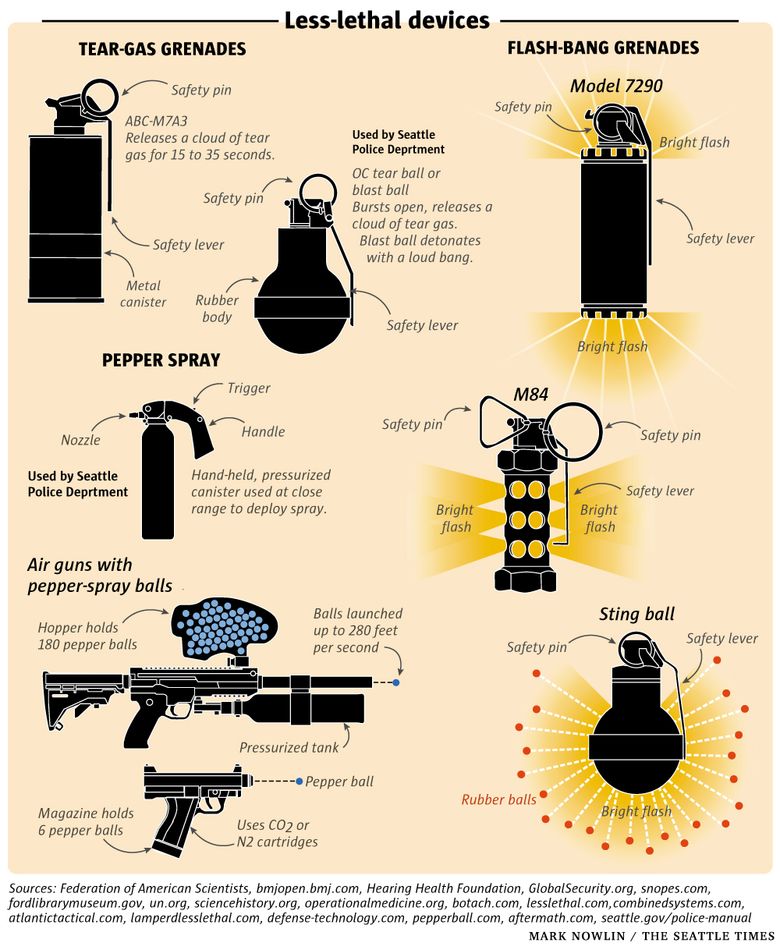 Tear gas, flash-bang grenades and pepper spray: A breakdown of the devices police use to disperse crowds

“The accountability partners have been meeting to further these recommendations as soon as possible,” Nyland added.

Represented by a legal team that includes the American Civil Liberties Union of Washington, the plaintiffs alleged the city had violated the constitutional rights of Black Lives Matter demonstrators by allowing police officers to deploy “unnecessary violence” in controlling and suppressing crowds.

Jones initially issued a two-week order; the plaintiffs and the city later agreed to a preliminary injunction extending the terms of the order through Sept. 30.

The order says the police may not use “chemical irritants or projectiles,” including tear gas, pepper spray, blast balls and sponge rounds, “against persons peacefully engaging in protests or demonstrations.”

But the order also “does not preclude individual officers from taking necessary, reasonable, proportional and targeted action to protect against a specific imminent threat of physical harm to themselves or identifiable others, or to respond to specific acts of violence or destruction of property.”

In an online statement, the Police Department said officers during the day Wednesday had “deployed pepper spray during the arrest of an individual who was armed with a metal pole” and in another incident “used a single less lethal 40 mm sponge round on a man who appeared to be brandishing a metal pipe.”

The Seattle Times has not independently confirmed the pepper spray and sponge round were deployed under those circumstances. An officer appears to deploy pepper spray while advancing on people in the CHOP in a video posted on Twitter by a KING-TV reporter. No metal pole is visible in the video.

On Wednesday night at Broadway and East Pine Street, according to the Police Department, “police deployed blast balls and pepper spray while attempting to make arrests after individuals in the crowd began throwing bottles at officers.”

Chase Cross, a Seattle resident who took part in the protest at Broadway and Pine, characterized the crowd there as “agitated but peaceful” and the response by officers as unnecessary.

Cross said he saw some people crossing a line officers didn’t want them to cross and saw a plastic bottle thrown. “The police responded with violence … batons, blast balls and some kind of irritant,” he recalled, saying officers deployed projectiles over the top of the crowd and then advanced.

“It was fundamentally a crowd that insisted on holding physical space but wasn’t engaging in anything that could be construed as threatening the safety of officers unless … police claim people coming close is a threat,” he said.

The Police Department said there were 69 arrests Wednesday through early Thursday on charges including failure to disperse, assault and obstruction.

In an email Thursday, one of the attorneys representing the plaintiffs in the federal lawsuit, David Perez, said the legal team is “gathering and reviewing evidence and urge anyone who was present or witnessed the City’s use of force to reach out to us to provide us their account.”

Perez added, “We are concerned with many reports we have heard, including that the SPD fired blast ball grenades into a crowd of demonstrators. We have reached out to the City for an explanation. Any indiscriminate use or use against peaceful protesters of these dangerous weapons would violate the court’s order.”

The council’s legislation, which prohibits “ownership, purchase, rent, storage, or use” of most crowd weapons by the city, has not yet taken effect. It prohibits the use of pepper spray only at protests and “when used to subdue an individual in the process of committing a criminal act or presenting an imminent danger to others, it lands on anyone other than that individual.”

Durkan returned the legislation on June 26 without her signature, so the ban is scheduled to take effect later this month. Meanwhile, the Seattle Police Officers Guild (SPOG) has demanded to bargain with the city over the legislation and how it gets implemented.

Durkan returned the legislation unsigned for various reasons, according to Nyland and a letter the mayor sent to the City Clerk on June 29.

She thought the council should wait for a recommendation on crowd control from Seattle’s police accountability agencies before taking action, Nyland said.

In her letter, Durkan said the council’s move undermined those agencies; possibly contravened existing SPD policies approved by the federal judge overseeing the city’s police reform consent decree; “attempts to expand or overrule” the Jones injunction; and could “result in significant financial and legal liability for the city” by allowing bystanders in a crowd to sue.

The Jones injunction strikes a balance by allowing “specified uses” of crowd control weapons “where there is an imminent, identifiable threat to life safety and property,” the mayor wrote. “The council’s legislation has no such exemption.”

Nyland said SPOG’s demand to bargain over the council’s ban “is not relevant to the tactics SPD used yesterday.”

She added, “SPD does not make tactical decisions in response to demands to bargain; the department makes tactical decisions based on their commitment to protect life and property, their training, policy and law, and their responsibilities under the preliminary injunction and consent decree.”