Colleen Echohawk almost always begins by talking about her grandmother.

At campaign appearances over the last six months, as she seeks to become Seattle’s mayor and potentially the first Indigenous woman to lead a major American city, Echohawk introduces herself and says “I am most proud to be the granddaughter of Katie John, from Copper River area and Mentasta Lake.”

John, who adopted Echohawk’s mother, fought a decadeslong legal battle for her and her family’s right to subsistence fishing on their longtime homeland, in the Alaskan interior.

An Ahtna Athabascan Indian, John’s case wound in and out of state and federal court for 30 years. A key turning point came in 2001. John invited the governor of Alaska, Tony Knowles, to spend the day at her ancestral fish camp near the Copper River, Batzulnetas. He brought ice cream. She showed him a fish wheel. They sat in folding chairs on the riverbank. Three weeks later, Knowles decided the state would drop its appeal in John’s case.

“I learned more that day than is written in all the boxes of legal briefs in this long-lasting court battle,” Knowles later said. Katie John Day is now a state holiday in Alaska, celebrated every May 31.

As Echohawk, 45, seeks the highest elected office in Seattle, she draws inspiration from her grandmother in two ways.

One: “You don’t stop fighting for your community,” she said. “You stand up for the most vulnerable.”

And, two: You seek to bridge differences through connection, just as John and Knowles did at Batzulnetas. 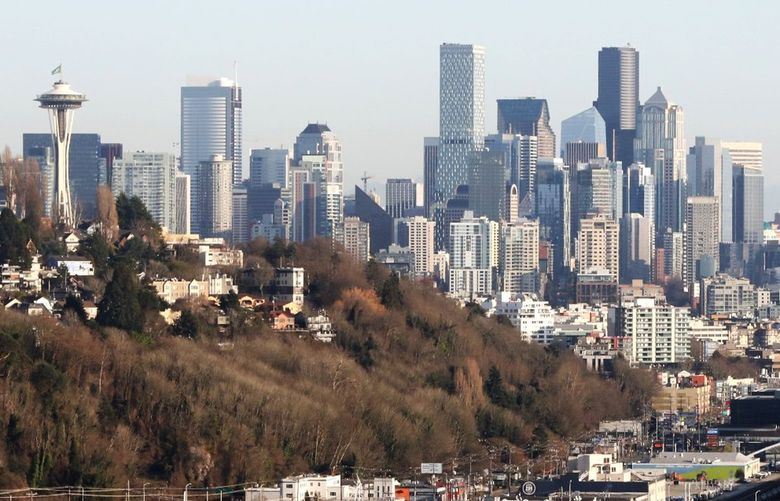 “There’s so much misunderstanding, there’s so many things we don’t know about each other because we’re not in relationships and in community with one another,” said Echohawk, who, for seven years ran the Chief Seattle Club, a nonprofit that provides housing and services to Native people.

It’s why, as she supports ideas like publicly run broadband internet and, potentially, a Seattle capital gains tax, she’s also served on the boards of business-friendly groups like the Downtown Seattle Association and the Seattle Foundation.

Echohawk, as a member of the Community Police Commission, was a vocal critic of the contract the city signed with the Seattle Police Officers Guild in 2018, even as the Downtown Seattle Association was a vocal supporter.

“I’m going to go places where, even though often I feel like a token, but if I can help you know and understand my community, the Native community, the homeless community, I think it can change your perspective; it can give you better understanding of ways that we can work together,” she said.

“It could be true that she vigorously disagreed privately,” Mizrahi wrote on Twitter. “But this is ALSO exactly what you would say if you are running for mayor and needed to win over progressive voters.”

Echohawk, who has never before sought or held public office, bills herself as a “pragmatic progressive.” In a race where some of her leading opponents include the City Council president, the former City Council president, a former state legislator and a former deputy mayor, she says she’s the outsider candidate who “had no power” as the city’s homelessness crisis festered, but still has experience with the levers of influence needed to make change.

“The crisis of homelessness has just grown and grown and grown,” Echohawk said. “And our leaders who are running, my opponents, they are partially responsible for it, they were there, it happened under their watch.”

Fish camp, then a trip to Seattle

Echohawk is an enrolled member of the Kithehaki Band of the Pawnee Nation and a member of the Upper Athabascan people of Mentasta Lake.

Her father, who was born on the Pawnee reservation in Oklahoma, met her mother, “a cute little Irish woman,” in Alaska, where he’d moved to work on the Trans-Alaska Pipeline.

Echohawk and her seven siblings grew up in Delta Junction, population 1,000 or so, about 90 minutes southeast of Fairbanks. Their family ran a 22-room hotel and the kids helped out, cleaning rooms and working the front desk.

In the summer, they’d go with their neighbors, the John family, one of the only other Native families in Delta Junction, to fish camp, a couple of hours away, near the confluence of the Copper River and Tanada Creek.

“It’s so light out, you stay up super late, you’re fishing, you’re processing the fish, the kids are learning the traditional ways,” Echohawk said. “Fish camp is like going to school because you’re learning all these ways to sustain yourself in the middle of rural Alaska.”

“It was really a huge blessing for me because I think I would have felt a little unfettered about being a Native person in a non-Native place,” she said.

When she was 16, her family rented a 15-passenger van for a summer road trip to visit relatives in Seattle and Colorado.

Affectionately called “the hell trip” (it was hot, the drive was interminable, there was a vomit incident), it also sparked Echohawk’s love for Seattle.

She remembers driving down Pike Street, toward the Market, seeing the water “and my mind was blown and that moment was like, this place is magical and amazing.” She told her mom she was going to move to Seattle and be a busker.

After a year in community college in Valdez, Alaska, she met her future husband on a Christian mission trip to Malaysia, Singapore and the Philippines. He was moving to Seattle to go to the UW, so she went too. Initially a music major at Antioch University, she changed course (as busking dreams faded) and earned a bachelor’s degree in multicultural studies.

They’ve been in Seattle, mostly, ever since. For the last eight years or so, they have run Headwater Consulting, an organizational and leadership consulting firm. They have two kids, ages 12 and 14, and a dog, Rizzo, whose full name is Rizzo Ray Rue Alexandria Ocasio Cortez Yvonne Echohawk Hayashi.

Echohawk says in The Seattle Times’ Meet the Candidates online guide, that the city is facing multiple challenges, including police reform, the climate crisis and recovering from COVID-19.

She previously said police funding should be cut by some level — although less than the 50% activists have demanded — but her lengthy plan on police reform contains no detail on police funding. She says the department needs a new culture and a new contract with its police union and she said she would never sign off on police use of tear gas.

Echohawk has made homelessness, the issue she’s worked on the last seven years, the focal point of her campaign.

The Chief Seattle Club has grown significantly since Echohawk took over in 2014. That year, it had assets of around $6 million and revenue of just under $700,000, according to IRS filings. In 2019, it had more than $16 million in assets and revenue of more than $11 million.

The organization has used the increased funding — part of which comes from an increase in government grants — to fund a day center for Native people experiencing homelessness. It opened, in 2019, a transitional housing facility south of downtown and is constructing a nine-story building in Pioneer Square — designed by and for Native people — that will have 80 units of affordable housing, a health clinic and community space.

“It didn’t skyrocket, it was just swept under the rug,” Belgarde said. “Colleen was not happy about that, she said with this kind of disparity it should be on the forefront of everybody’s public agenda, she made it happen.”

Katie Wilson, general secretary of the Transit Riders Union, which endorsed Andrew Grant Houston, worried that the qualities Echohawk showed in running a nonprofit — soliciting businesses and institutions — could be “dangerous as mayor.”

For more information about voting, ballot drop boxes, accessible voting and online ballots, contact your county elections office. Ballots are due by 8 p.m. on Nov. 2.

“I’m not confident that she would stand up to big business interests when the going gets tough,” Wilson said. “Maybe she would, I just think there’s some risk there.”

Echohawk’s 22-point plan for moving everyone into shelter in 14 months includes moving homeless people into hotels, creating more modular housing, safe lots for vehicles and tiny house villages, and creating a real-time list — by name — of every homeless person in the city.

She envisions funding coming from existing city funds, federal COVID-19 assistance and a capital campaign, soliciting donations from corporations — she mentioned Vulcan, Amazon and Comcast — and philanthropies. If that’s not enough, “we may have to think about a tax,” she said, specifically a 1% city capital gains tax.

She’s gone back and forth on the “Compassion Seattle” charter amendment, which would require the city to keep public spaces clear of encampments, but now opposes it, because, she says, people with lived experience of homelessness were not consulted.

She said she decided to run for mayor, in large part, because she was so frustrated about homelessness in the city.

But since launching the campaign, she’s thought more about what it would mean for a city named after an Indian chief to have its first Indigenous mayor.

“Part of the reason we have so much Native homelessness is because no one in power has noticed or cared or been a part of that community,” she said. “I feel like as a Native person I’m being pushed by my ancestors to do this.”