Seattle Mayor Jenny Durkan rebuked President Donald Trump Thursday as a feud over protests — and power — in Seattle’s Capitol Hill neighborhood boiled over amid stewing tensions, presidential mischaracterizations and unverified information, some shared by the mayor’s own police department.

Trump on Wednesday evening branded demonstrators, who for days have occupied the area around the Seattle Police Department’s East Precinct, as “domestic terrorists” and threatened federal action if local leaders don’t “take back” the city.

Durkan in a news conference said the president’s descriptions of the protests were inaccurate, accused him of sowing division and said any threat to “invade” Seattle was neither welcome nor legal.

“Clearly and unfortunately our president wants to tell a story about domestic terrorists,” Durkan said. “It’s simply not true.” Separately, Gov. Jay Inslee urged Trump, whom he described as “totally incapable,” to stay out of Washington’s affairs.

Meantime, national debate swirled — plenty of it conjecture and speculation — over SPD’s decision to relinquish the area around the precinct to protesters, and also over demonstrators’ actions since they laid claim to several blocks for teach-ins and film screenings, erected barricades and renamed the area the Capitol Hill Autonomous Zone, or CHAZ.

A mix of block party, street protest and unsanctioned graffiti gallery, the area around the East Precinct has remained largely peaceful since police left, though a few people had been spotted carrying long rifles.

The Seattle Police Department decamped from the precinct on Monday, after days of standing in riot gear across from demonstrators who had seized on the area as a rallying point for protests over racism, inequality and the police killing of George Floyd in Minneapolis.

But multiple nights of the protest were punctuated with the pops of flash-bang grenades or the fog of tear gas as police used the weapons to disperse protesters, often saying people in the crowd had thrown bottles, firecrackers and other objects at officers. 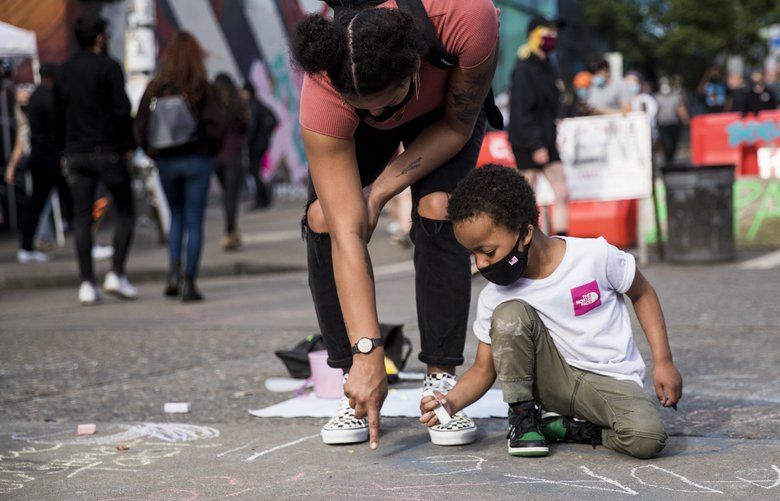 Tensions over crowd dispersal reached a fever pitch Sunday after Seattle Police Chief Carmen Best decided to use tear gas just days after she announced with Durkan a 30-day ban on its use. The ban included an exemption for the use of tear gas “to protect life and end standoff situations.”

“I own that decision,” Best said during Thursday’s news conference, adding that the crowd of demonstrators had become “unruly” and that officers had spotted a gun.

On Monday, police barricades were removed, and protesters quickly established their own barriers to vehicle traffic. A roughly six-block area now makes up the so-called autonomous zone, which is mostly free of uniformed police.

Best reiterated Thursday that it was not her decision for officers to leave the precinct, but police left after receiving threats the building would be set on fire.

“As officers were taking things out of the precinct, they didn’t want to come back into the precinct and many of them did not,” she said, without elaboration. “It did not come from me.”

She said in a video address to officers, released earlier in the day, “the city had other plans for the building and relented to severe public pressure.”

Meantime, stories of demonstrators demanding identification from residents and extorting neighborhood businesses might have triggered the president’s attention. Those rumors took off when the Seattle Police Department on Wednesday described reports of such lawlessness.

But Best walked back the department’s information, which was reported widely by news media, including The Seattle Times.

“That has not happened affirmatively,” Best said, adding that the police department had based earlier claims on anecdotal reports, including in the news and on social media. “We haven’t had any formal reports of this occurring.”

Some protesters hope to turn the East Precinct into a community center. Their occupation has involved sharing free food and aid, speaking about racism and inequality and watching films together on 12th Avenue and Pine Street.

Best acknowledged that the movement had been largely peaceful and without serious incident, though there had been reports of vandalism, property damage and at least one fight.

But the department hopes to return officers to the East Precinct soon and Best said she is concerned that police response times have tripled to about 15 minutes for nearby calls.

“The actions of a small group cannot and should not deprive an entire segment of our community from public safety services,” Best said.

There is no timeline for police return.

“We don’t want to introduce additional flashpoints,” Durkan said, arguing that police’s departure had de-escalated a cycle of conflict between the force and protesters. Durkan said the city’s leaders were performing an “ongoing assessment” on when it would be safe and appropriate for officers to return.

Durkan said she has not met with protesters on Capitol Hill. Best visited the precinct Thursday morning.

Demonstrators Thursday continued to hash out the logistics of holding on to the newly declared Free Capitol Hill.

Around 4:30 p.m. Thursday, at one entrance to the area, demonstrators shouted at two Seattle police officers to leave. To the south, on another edge of the six-block zone, an officer entering a side door of the precinct spoke to a protester who criticized the department’s recent use of tear gas and pepper spray in the neighborhood during earlier demonstrations.

Nearby, speakers took turns on a microphone discussing their demands and how to address the police presence. Other people gardened in Cal Anderson Park, lounged in tents and sat in camp chairs at a “conversation cafe.”

Artists painted designs on the huge block letters on East Pine Street, 19 feet tall, spelling out “Black Lives Matter.” A 40-year-old mural artist and Belltown small-business owner, who declined to give his name, said he got the idea for the street mural by observing similar street paintings in other cities during the nationwide demonstrations sparked by Floyd’s killing.

“Ninety percent of the artists are Black, and the rest are people of color,” the man said. “I mean, this is a Black Lives Matter mural. It should be painted by people of color.”

All of the paints and other supplies so far used to create the mural have been covered by donations from demonstrators and passersby, he said. Artists were still accepting donations to raise money for a final batch of weather coating to preserve the work once it is complete.

“What’s happening right now should not be forgotten,” he said. “The best-case scenario is that this will stay here forever, and the city helps us touch it up each year or whatever to make sure it does.”

Meanwhile, more demonstrations are planned on Friday, as Black Lives Matter Seattle – King County calls for a statewide strike and day of action. The day will include a silent march leaving Judkins Park at 2 p.m.

“We want this to be a moment to honor and hold space and mourn those who’ve lost their lives to police brutality and institutional racism in this country,” chair Ebony Miranda said in a video news conference.

Durkan said Trump’s tweets distracted from the message of Black Lives Matter demonstrators, who are seeking social change and police accountability. Durkan and Best both said they were committed to reimagining the job of Seattle police officers, which Durkan argued had expanded beyond public safety and into dealing with people’s mental health crises and family disputes. She also said social, health and education programs are underfunded.

“Police officers are required to do jobs they shouldn’t be doing,” Durkan said. “When people call 911, they don’t necessarily need to have a police officer show up.”