That June, as cops lobbed tear gas from behind barricades, and protesters on the streets surrounding the precinct called for the Police Department to be defunded, Durkan’s office behind the scenes briefly contemplated handing over the multimillion dollar property that had become the focus of the demonstrations.

Calvin Goings, the director of the city’s Department of Finance and Administrative Services (FAS), emailed three memos and a draft resolution to Durkan on the afternoon of June 8, 2020 — at about the same time police were abandoning the East Precinct on Capitol Hill.

The draft resolution for transferring the property to Black Lives Matter Seattle-King County (BLMSKC) included a July 1 effective date, and Durkan’s office subsequently discussed the possibility with the nonprofit, which at one point pushed to remake the building as a hub for public health and community care.

“Good afternoon Mayor, Please see the attached documents as requested. Please let me know if you have any questions or concerns,” Goings wrote at 3:10 p.m. on one of the most chaotic days in recent Seattle history, after more than a week of confrontations between police and protesters that the Durkan administration was struggling to control.

The summer of 2020 was an impactful period, yet many City Hall deliberations — such as work on a potential East Precinct transfer — happened behind closed doors, leaving journalists and residents in the dark. Text messages exchanged among a number of key decision makers, including Durkan and her police and fire chiefs, have gone missing.

More than a year and a half later, the East Precinct memos, obtained by The Seattle Times this month through a records request, are the only details that City Hall has publicly disclosed about the potential transfer, shedding some light on an idea that Durkan has since distanced herself from. They’re already playing a role in at least one lawsuit against the city, brought by businesses and residents over the Capitol Hill Organized Protest (CHOP).

The city didn’t end up transferring the East Precinct property, which police reoccupied on July 1, 2020. Durkan, whose term expired last month, dropped the idea after “the very preliminary work by FAS and the realities of policing confirmed it was neither feasible nor in the best interest of public safety,” Chelsea Kellogg, a spokesperson for Durkan, said in an email last week.

BLMSKC ultimately supported a position held by the Rev. Harriett Walden, a community leader who spoke out in favor of police returning to the building, Kellogg added. Walden noted that the first Black member of the Seattle City Council, Sam Smith, had supported the establishment of the East Precinct, which opened in 1986 after years of controversy.

BLMSKC was not closely involved with the protests on Capitol Hill, nor with the CHOP. Walden didn’t know about conversations with the mayor’s office about transferring the East Precinct building to BLMSKC, she said this month.

Police Department officials also weren’t included in the conversations, according to spokesperson Sgt. Randy Huserik. “We were not aware of any plans on the city’s part to permanently leave the precinct, or any plans to share the space with the community,” he said in an email Friday.

In a recent deposition, former Deputy Mayor Casey Sixkiller said the Durkan administration nixed the East Precinct transfer possibility after the activists decided they didn’t want the property. It was a coincidence that the draft resolution was shared on the same afternoon the precinct was abandoned, Sixkiller said.

The Times contacted BLMSKC board members about the matter.

“Black Lives Matter Seattle-King County will not make a statement at this time,” board member Anthony Canape said in an email Monday.

The Durkan administration’s work on a potential East Precinct transfer didn’t surface publicly until Sixkiller was deposed and until former Police Chief Carmen Best mentioned the matter in a book last year.

Since then, Durkan representatives have denied the building was offered and downplayed the notion that City Hall seriously pursued a transfer, attributing the idea to some demand letters from activists and to City Councilmember Kshama Sawant, who on June 11, 2020, tweeted she would sponsor legislation to convert the property into a community center.

“There was no plan to transfer the East Precinct and from the time SPD made the decision to temporarily evacuate the precinct for safety reasons, it always planned to return,” Kellogg said.

But the FAS memos from June 8, 2020, demonstrate that Durkan’s office was interested in a transfer before the precinct was abandoned and before Sawant weighed in. A June 15 letter from BLMSKC demanding a transfer and offering to contribute millions of dollars to repurpose the building was circulated by mayoral staffers. And additional FAS memos from June 17, 2020, indicate the administration continued for more than a week to explore the possibility of permanently relocating East Precinct police operations.

“Interesting that you assume and state that the Mayor asked for a draft resolution on this property when that is not how the process works,” she said. “FAS oversees both city owned property and many real estate deals.”

“The Durkan administration directed FAS — in its capacity as the city’s real estate and facility management agency — to outline the process to transfer the East Precinct to BLMSKC,” Mixon said this month.

The evacuation of the East Precinct on June 8, 2020, followed more than a week of intense protests, including standoffs over multiple nights between police and protesters at barricades around the precinct.

Durkan ordered Best to have the barricades removed and to allow protesters to pass by. Instead, the precinct was abandoned and many protesters lingered in the area, setting up what came to be called the CHOP.

Durkan and Best denied they were involved in the decision to leave the precinct but never publicly named who was responsible. According to a report released in October by the city’s Office of Police Accountability (OPA), Assistant Chief Tom Mahaffey ordered the evacuation. In interviews with OPA, he gave conflicting accounts as to whether he directly informed Best.

One of the June 8, 2020, memos from FAS reviewed options for moving the physical contents of the precinct; a second memo explored alternative sites for the precinct’s operations; and a third memo looked at transferring the precinct building to BLMSKC. Attached to the third memo was “proposed language that the Mayor could use for a resolution to transfer the property.”

The resolution included “whereas” clauses that established the reasons for the transfer, including: “This precinct houses Seattle Police officers who patrol Seattle’s Central District neighborhood and has been seen as a symbol of police oppression in one of Seattle’s historically Black neighborhoods. This property is valued in excess of $5,000,000.”

The resolution then stated: “The City transfers permanent use/ownership of … the East Precinct to Black Lives Matter Seattle-King County, effective July 1, 2020. The City of Seattle agrees to vacate the property and remove all law-enforcement materials and police-related facilities …”

The memo that focused on the physical contents of the precinct building recommended the city hire a contractor “if a move is called for.”

The memo that focused on alternative sites reported that “a 24-hour search (for expediency)” had turned up no properties available for lease with enough spaceand recommended the city hire a broker to conduct a more thorough search. Attached to the memo were a list of properties available for lease and a list of city-owned properties where portables could be hosted, “if portables are identified as the solution.” The memo also suggested the city could buy or lease a different building for community use, rather than disrupting police operations.

The memo that contemplated the handover to BLMSKC recommended additional work be done with the City Attorney’s Office to draft property-transfer documents and to ensure that all tax implications were considered.

The existence of the East Precinct transfer documents bubbled up last year in the CHOP lawsuit by businesses and residents. The plaintiffs want to make a connection between the potential transfer and the precinct’s evacuation.

In his deposition for that case, Sixkiller acknowledged that Durkan was contemplating the transfer idea, thinking along the lines of the Daybreak Star Indian Cultural Center established after Native American activists in 1970 occupied decommissioned Fort Lawton. But he recalled “expressing to her that while she may have a strong desire to put this on the table as a conversation point with folks, that it’s not ready.” Sixkiller added: “I can’t imagine that anybody actually asked for a resolution to be drafted,” attributing the legislation to the FAS director’s “can-do spirit.”

The plaintiffs in the CHOP lawsuit included the draft resolution to transfer the precinct and other records as exhibits in a motion filed this month that seeks to certify the federal lawsuit as a class action, attorney Angelo Calfo said this month.

Best also mentioned the possibility of the precinct transfer in her book, published in October. Activists told the former chief that “someone in the mayor’s office had offered them keys to the building, but the BLM leaders did not want to take it over,” she wrote.

On June 15, 2020, a letter from BLMSKC to Durkan and other leaders demanded the precinct be ceded to the organization as part of a process to repurpose the building with Public Health—Seattle & King County for community needs. BLMSKC offered to contribute $2 million for renovations and $4 million to help support operations.

“We demand an active, responsive resource and tool that works for us, not one simply handed off for political expediency,” the letter said, adding, “One of our goals in reclaiming the East Precinct for this use is to quiet the physical space and surroundings. Protesters need a reprieve. They need to know that demands have been met …”

In an email that day about the letter, then-Deputy Mayor Shefali Ranganathan noted to other top mayoral staffers that “they are willing to bring $ to the table.”

On June 17, 2020, an FAS staffer sent additional memos about the East Precinct to members of Durkan’s cabinet, including a memo that explored “interim site options” for the precinct’s police operations.

“In the event that the SPD East Precinct operations do not move back to the Capitol Hill location, it will require at least 1-2 years to develop a new long-term site,” that memo said, recommending a property at 1130 Rainier Ave. S. as a suitable interim site.

Another June 17 memo looked at the possibility of co-locating police and community functions at the East Precinct property.

After a weekend of shootings in the CHOP, Durkan announced June 22, 2020, that the police would go back to the East Precinct building, and on July 1, 2020, they returned. In a news conference that day, Durkan said Walden would be “leading outreach” about the future of the East Precinct.

“I truly believe we can reimagine the space, a shared space, including a community room in the East Precinct and things in and around Capitol Hill,” Durkan added.

Walden hadn’t agreed to lead any outreach, she said later that month. Nothing came of the idea for community space in the East Precinct. 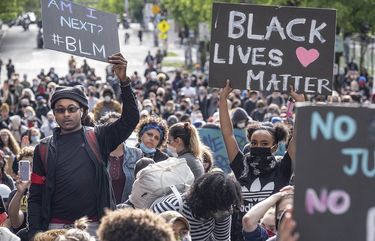