Snow blanketed the region Friday night and Saturday morning, with depths of up to a foot. Seattle-Tacoma International Airport saw 8 inches, according to the National Weather Service in Seattle. Snow was expected to taper off later in the afternoon. Across the city, residents took to the streets on sleds and skis, while city crews plowed roadways and emergency officials reported hundreds of calls for service. 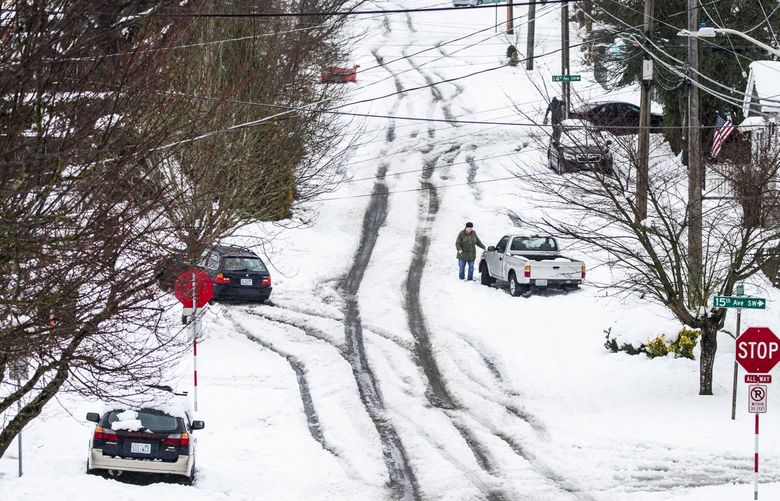 Driving in the snow can be a Northwest nightmare. Here’s how to do it while saving your sanity.

Mayor Jenny Durkan called on Seattleites to avoid driving, shovel the sidewalks near their homes and businesses and check on their neighbors.

Shoveling sidewalks is the responsibility of the adjacent property owner. In past years, people who walk or use wheelchairs have called for more thorough clearing of sidewalks that can otherwise leave people trapped. City inspectors are checking sidewalks and “making contact” with property owners on high-priority routes, said Seattle Department of Transportation Director Sam Zimbabwe.

Crews continue to plow and de-ice streets across the region.

Seattle and King County crews have been clearing streets in 12-hour shifts around the clock, officials said. City crews are prioritizing areas near emergency services as well as coronavirus testing and vaccination sites, Zimbabwe said.

Streets with steep hills are closed to traffic — but that does not mean they are open for sledding, Zimbabwe said. “Please look for places off our streets to enjoy the winter weather. We really want to keep everyone safe,” Zimbabwe said.

Drivers should be cautious even when roadways appear clear, said David McCormick, WSDOT assistant regional administrator. “Don’t let it fool you … black ice could be there,” McCormick said. (If you do have to drive, carry extra food, clothes and boots and be sure your phone is charged, officials said.)

In past years, snow in Seattle has proven deadly for those living outside.

In King County, an estimated 11,751 people live homeless, about 5,500 in cars, tents or other places not designed for human habitation. Last year, six people who were presumed to be homeless died of causes involving hypothermia.

City of Seattle spokesperson Lori Patrick said no one was turned away from a severe-weather shelter Friday night. However, two people did not pass COVID-19 screenings. One person was transferred to an isolation and quarantine site run by Public Health – Seattle & King County. The other person declined transport.

City outreach workers were checking on people living outside in neighborhoods around the city, Howell said. Those in need of shelter should call 211. For families with children, call the YMCA at 206-461-4882.

Around the region, several coronavirus testing and vaccine locations closed Saturday due to the weather.

The Seattle Fire Department is continuing its coronavirus vaccinations with mobile teams who are “chained up and out in the field to continue delivering the vaccine to the people who need it most,” Durkan said.

Two vaccine teams will have visited 10 locations by the end of the day Saturday, Scoggins said.

Seattle Fire Department crews were responding to nearly double the usual number of calls, said Scoggins. From 6 p.m. Friday night through early Saturday afternoon, the department responded “out the door” more than 400 times, compared to the usual 225 to 250 times in a 24-hour period, Scoggins said.

The Seattle Police Department received more than 600 calls in 12 hours, according to Interim Chief Adrian Diaz.

Seattleites could see their garbage service disrupted if snow continues.

A small number of commercial and multifamily buildings that have trash picked up on Saturdays missed service as the weather created hazards for garbage trucks, said Seattle Public Utilities General Manager Mami Hara.

If snow and ice remain on Monday, SPU will operate on a one-day delay for garbage pickup, Hara said.

Meanwhile, those who have set up tents or canopies for socializing outside should be sure to check them since accumulated snow can cause collapse, Zimbabwe said.