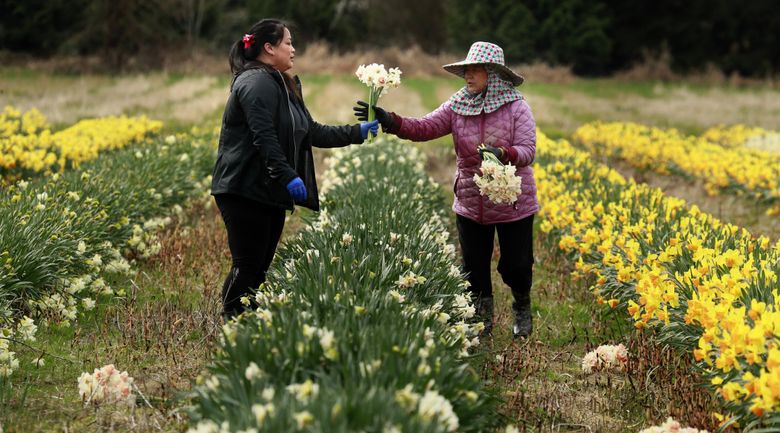 Mary Thao harvests daffodils with her mother, Xai Cha, at Xai C. Farm in Snohomish. Thao, who works on the farm with her parents, will eventually take over their business. “They were able to come to America with the help of few and limited resources— they were able to persevere,” says Thao. “To me, it’s definitely an honor to take it on and take over.” (Erika Schultz / The Seattle Times)
By
Erika Schultz
and
Corinne Chin
Seattle Times staff

On an early morning in April, Xai Cha, 59, and her daughter Mary Thao, 38, harvested some of the first flower crops of the year at their farm near the Pilchuck River in Snohomish County.

As they collected dark pink tulips and yellow daffodils, Thao worried about their steadily blooming fields. Most of the non-food-related businesses at Pike Place Market — including their daystall — had closed in mid-March due to Washington state’s stay-home order. Their storage cooler was nearly full.

“Our only outlet for selling flowers is Pike Place Market,” said Thao.

With Mother’s Day approaching, it’s a critical time for Washington’s Hmong flower farmers. “For most of us, it’s our first income for the year,” Thao said.

The farmers — whose colorful bouquets have become a staple at Pike Place — quickly modified their business models after the novel coronavirus outbreak closed their daystalls at the market. History has taught them resilience.

“My parents have been through worse,” Thao said. “We’ll get through this.”

“The strongest lady I know”

Sheltered from afternoon rain showers under a tarp, Scott Chang, 35, and his mother Cheu Chang, 74, of See Lee Farm, chatted about their family history while arranging bouquets in their backyard in Burien.

Born into a family of farmers in Laos, Cheu Chang recalled leaving her childhood home and fleeing into the jungle for safety. During the Vietnam War, the CIA enlisted many Hmong families to gather military intelligence and fight communists in Laos as part of a covert operation, hidden from Americans for years. With the communist takeover in the mid-1970s, tens of thousands of Hmong people in Laos escaped to refugee camps in Thailand.

“A lot of people, they cannot cross the Mekong River, they just died,” Cheu Chang said of the thousands of Hmong who tried to reach Thai refugee camps. “Remembering back to our country – that’s really, really hard for us.”

After living in Thai refugee camps for three years, Cheu Chang arrived in the United States in 1980. She found work as a fish cleaner and seamstress. In 1983, she started farming with the Indochinese Farm Project, a co-op for Hmong and Mien refugee farmers in Woodinville. King County, Washington State University and the Pike Place Market Preservation and Development Authority supported the program, designed to empower refugees through business support and arranging for farmers to sell their products at Pike Place Market.

Scott Chang learned to walk at that Eastside farm. He remembers being strapped to his mother’s back as she worked in the fields. As a baby, he napped in wooden lettuce crates under their table at Pike Place Market.

“She is the strongest lady I know,” he said. “She’s technically retired, but out of everybody in the family, she’s the hardest worker. Wakes up before everyone, sleeps after everyone.”

There are around 80 Hmong flower farms in Western Washington, employing between 300 and 400 people, according to the Hmong Association of Washington.

At the start of the coronavirus outbreak, some farmers had to throw away flowers or leave them in fields to rot. Others had no place to sell, even though other vendors frantically tried to help them find new outlets.

Cynthia Yongvang, board president of the Hmong Association of Washington, said like many small businesses, many Hmong family farms had difficulty accessing the Paycheck Protection Program (PPP), created to help small businesses keep employees on payroll.

Additionally, many Hmong flower farmers struggled for weeks trying to determine if Washington state’s stay-home order allowed them to keep working in the fields, as well as harvest, deliver and sell bouquets.

“The complexity of these guidelines — what is essential and what is not — can ultimately have some unintended consequences and inequitable impacts for Hmong flower farmers, even though this wasn’t the intention,” said Jennifer Antos, executive director of Neighborhood Farmers Markets.

Antos said some Hmong flower farmers have been left without income to plant summer vegetables.

“Spring flowers are the only thing growing January though May, and those profits build the foundation for the rest of the growing season,” she said. “Normally, that income would support buying seeds, paying the lease on the land for the season.”

In response to the confusion, Gov. Jay Inslee’s Office and the Washington State Department of Agriculture announced in late April that floriculture does indeed fall within the agricultural sector identified as essential in the “Stay Home, Stay Healthy” order. Antos said cut flowers will soon be allowed for sale at Seattle and King County farmers markets.

While preparing bouquets for Mother’s Day, Scott Chang said “sales are catching up” to pre-coronavirus times. He said community members’ word of mouth and fundraising efforts by the Hmong Association of Washington and the Pike Place Market Preservation and Development Authority have helped support Hmong farmers.

Vikki Cha, with Chue Neng Cha’s Garden, partnered with social entrepreneur Tara Clark to sell bouquets from Clark’s Capitol Hill home this spring. Together, Clark and Cha created 20 volunteer-led flower drop-off locations throughout the Seattle-area. Clark says by this weekend, they will likely have sold more than $300,000 worth of bouquets, with all proceeds going to 46 local Hmong farmers.

“Every farmer is very appreciative and thankful to have the community and local support,” said Cha. “Now, it’s not tourists buying flowers and taking pictures. It’s neighbors helping each other.”

Thao said the coronavirus outbreak has accelerated plans to try delivery services and expand their farm’s online presence. Her parents built up Xai C. Farm for decades and now will pass it to their children.

“They were able to come to America with the help of few and limited resources — they were able to persevere,” Thao said. “To me, it’s definitely an honor to take it on and take over.”