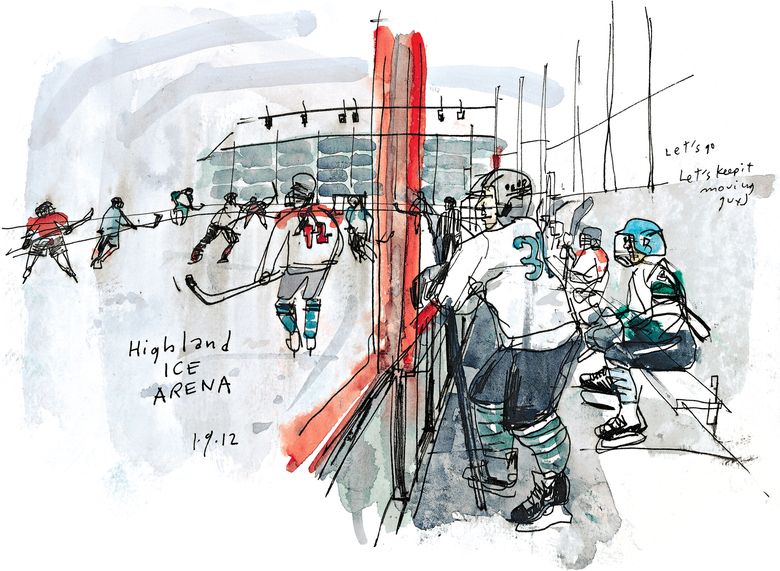 Sketched Jan. 9, 2012
Seeing them with their gear on, I never would have guessed the age of these hockey players.

Cy Wilson, the guy with the stick-wielding Snoopy on his jersey, is 85. He grew up playing on a frozen creek in Northern Minnesota. Ray Smutek, from Detroit and wearing the Seattle Thunderbirds jersey, is 75.

Every Monday evening, you can find Wilson, Smutek and their over-50 buddies playing a friendly “no-contact” pickup game at Highland Ice Arena in Shoreline. More than 20 guys usually show up, including 62-year-old heart-transplant survivor Sam Patterson. Theirs is one of two groups in the Seattle area for people 50 and older. The other one also plays in Shoreline, on Thursdays.

Smutek, who resumed playing two years ago after hip-replacement surgery, said this is a sport you can play as you get older. I found that hard to believe, but he added that “skating is easier on your knees than running … easier on your joints.”

And to give me more hope that hockey could still be in my future, Jim Claus, a member of the group who is 57, told me that he just started playing three years ago.

The game, however, is not the only thing that gets these guys on the ice every week, year-round, said Wilson. “We’re here for fun, exercise and a cold beer.”