Oil spilled from a train that derailed in northwest Washington on Tuesday appears to be contained around the crash site, with little or no harm so far detected to the public or environment, officials said Wednesday.

“There have been no wildlife impacts and most importantly no injuries to the public or responders to this incident,” Dave Byers, the state ecology department’s on-scene coordinator, said during a Wednesday morning press conference. 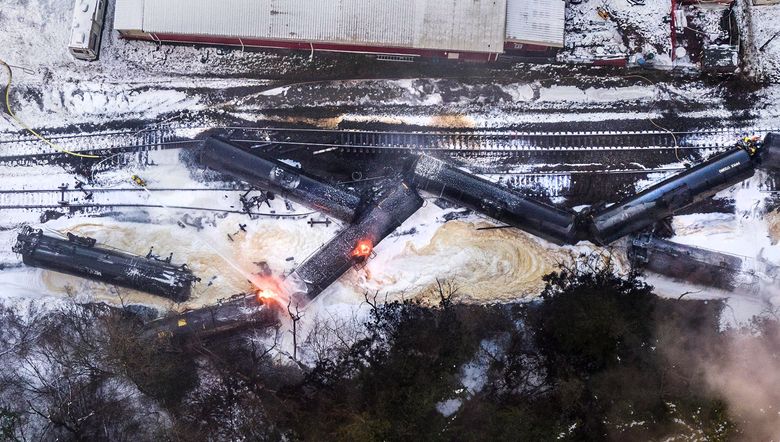 But officials say they still don’t know what caused a 108-car BNSF Railway train carrying Bakken crude oil to go off the tracks, sparking a fire and forcing temporary evacuations in the Whatcom County town of Custer. A stretch of Interstate 5 also was temporarily shutdown Tuesday.

BNSF officials could not readily say Wednesday how much crude oil spilled from about three cars that ruptured. State ecology responders and the railway’s contractors expect to have all of the railcars safely removed from the site, or the oil within tanker cars removed, within the next 24 to 48 hours, they said Wednesday morning.

Clean-up on the soil contaminated around the tracks and derailment site could take several months, Byers said. But so far, state ecology experts haven’t seen any oil in waterways, nor have they detected harmful levels of pollutants in the air from the fire, he said.

In all, seven of the tank cars derailed and two ignited around 11:40 a.m. Tuesday in the 7500 block of Portal Way, according to BNSF. The train was headed toward the Phillips 66 refinery in Ferndale.

A BNSF spokeswoman confirmed Wednesday the oil tank cars involved in the derailment were DOT-117Rs — an older variety of tank car that the company retrofitted in recent years to meet with new federal safety standards.

Overnight and early Wednesday, response crews continued to recover spilled oil from a ditch and waterway near the derailment, as well as from within the holds of the damaged railcars, according to Justin Piper, BNSF’s Northwest hazardous materials team director.

“That oil is being removed from the cars and being hauled to its final destination,” Piper said.

Officials said recent emergency management training exercises simulating train derailments and other emergencies, including one in the town of Custer, helped first-responders’ preparation for Tuesday’s response.

State ecology officials will continue to monitor the air for benzene and other potential risks, as well as take samples from soils and water near the crash site for weeks to come, Byers said.

“We don’t believe right now that oil flowed over land or got into Puget Sound,” he added. “Right now, it’s on-site containment.”

Another train derailed elsewhere in the state on Wednesday: In Yakima County, a 116-container BNSF train was hit by a semitruck and three locomotives and eight empty grain cars derailed. No injuries were reported.

Correction: This story has been updated with correct spelling of Sheriff Bill Elfo.