According to those who met Clyde Robinson, he rarely talked about himself unprompted. But those who were close to the World War II veteran and knew his story were privy to a living legend, one of Seattle’s last surviving Buffalo Soldiers — the men who served in the four all-Black U.S. Army regiments founded after the Civil War — whose contributions are often left out of history.

A longtime resident of Skyway, Robinson died April 14. He was 101.

Robinson was not only one of the last significant ties to an important piece of Seattle’s Black history, but a stalwart who was dedicated to the preservation of Buffalo Soldier history.

Glenn Tinned, Robinson’s nephew, remembered him as “a very dignified man. He would tell me stories of how he grew up with one pair of overalls and no shoes. But if you looked at his closet as an adult, you would see the sharpest-dressed man in the building.”

Tinned said Robinson rarely mentioned his accomplishments. In fact, Tinned didn’t know that his uncle had achieved the rank of sergeant in World War II until the last three years of Robinson’s life, when he started caring for him. “The man is very decorated. But you had to poke and prod it out of him. You’d have to be in his house and ask, ‘What is this medal for?’ And then he’d tell you about it even without being braggadocious.” 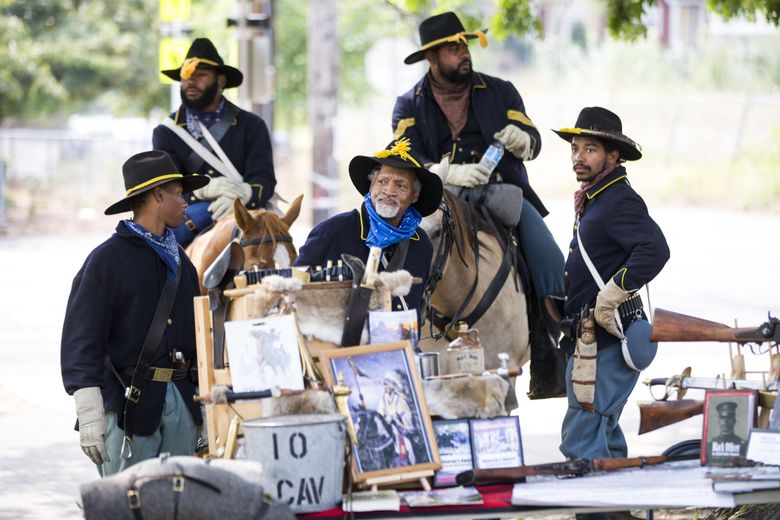 “He was just a gentle giant,” remembered Jackie Jones-Hook, executive director of the Buffalo Soldiers Museum in Tacoma. “He was tall in stature, about 6-foot-1 … he had a quiet personality, but a big stature and a big smile that could light up a room.”

Jones-Hook knew Robinson through her late father, William Jones, also a Buffalo Soldier who served in the 10th Cavalry Regiment, and who founded the Buffalo Soldiers Museum in 2005. Jones and Robinson were friends.

“He was a very proud Black man,” Jones-Hook said about Robinson. “The Buffalo Soldiers story is one of honor, dignity and integrity. And certainly Clyde represents a part of this history, a part of the legacy, and part of the legends of these men.”

“Clyde and his big smile will be remembered,” she said.

Robinson started the first Buffalo Soldiers activities and events in the Seattle area in the mid-1990s when he was in his 70s, often appearing at events in a Civil War-era blue Army uniform.

Buffalo Soldiers was the name given to all-Black regiments serving in a segregated U.S. Army after the Civil War until 1948. These soldiers served and sometimes died for a country that at the time still denied them basic human rights.

Buffalo Soldiers helped America’s westward expansion — a complicated legacy that included removal of Indigenous people, as well as defending them from white settlers.

The 1997 movie “Buffalo Soldiers,” starring Danny Glover, was influenced by Robinson. “When they were doing the research for that movie, Danny Glover came here and stayed with Clyde and hung out with Clyde and just picked Clyde’s brain,” said Tinned. “It was inspired by Clyde and all the information he shared with Danny Glover.”

Like a mini-museum, Robinson’s basement was full of Buffalo Soldier memorabilia. “He has a phenomenal collection,” said Jones-Hook. ”His own basement is dedicated to Buffalo Soldiers and horsemen, and has [built] quite the collection over the years.”

Robinson was born Nov. 20, 1920, in the small town of Gillett, Arkansas, the second oldest in a family of 10 children. He grew up on a rice farm and worked in the logging industry before being drafted in 1942 into the all-Black 9th Cavalry, part of the 92nd Infantry. He served in World War II, fighting with a machine gun troop against the Germans in Italy, and rising to the rank of sergeant. Robinson also traveled to the South Pacific, North Africa and Panama during his time in the Army, learning the languages of each country. He was in Panama preparing to join Allied troops in an anticipated invasion of Japan when the war ended.

Robinson was in the Fort Lewis area when he got out of the Army just after Christmas 1945. He worked on a military ship for the next 10 years as a room steward. The ship transported U.S. soldiers and their families from Japan, Korea and China. Robinson eventually settled in Seattle, working at Boeing first as a forklift operator and later a crane operator. Once he had established himself in Seattle, Robinson helped his younger siblings move out of the South.

“He was well-respected within his family,” Tinned said. “He sent for all the young siblings to come out [to Seattle] or get out of Arkansas and settle somewhere else. He knew Arkansas was too tough to be raised in as a Black person.”

Robinson lived in Madrona and Leschi before he moved to Skyway in the late 1990s. After he left Boeing, Robinson owned Clyde’s Landscaping for more than 45 years. Tinned helped Robinson with the business.

Tinned remembered that he had several contracts that lasted a few generations as Robinson worked on properties passed down through families.

Robinson became a lifetime member of Skyway Veterans of Foreign Wars Post 9430. He held the position of post guard for six years.

“Every year I would ask if he would stay in his position as guard for the post one more year, and he always smiled and said, ‘Yes, but just one more year,’” remembered Chad M. Hassebroek, the post’s Department of Washington commander.

Hassebroek forged a connection with Robinson, who was a regular at the post’s events. “He was always smiling when he came into the post home, and enjoyed speaking with the other veterans and families,” Hassebroek said. “He was a good friend, and I had the honor of knowing him and getting many opportunities to listen and learn history that you cannot get from books.”

In 2018, Hassebroek spotted a Buffalo Soldier Jacket while visiting a military base, and got it for Robinson. “I coordinated with the Blue Angel Sea Cadets to come to the post and escort him up to receive the jacket from me on Buffalo Soldier Day, July 28, 2018,” Hassebroek remembered. “I’ve never seen a man so proud to have a jacket.”

Post Commander Larry Weldon remembered Robinson was reluctant to talk about himself. “He was a pretty quiet guy,” Weldon said. “He wouldn’t just start talking, you’d have to talk to him for a while.”

Before Robinson’s 99th birthday, the Post presented him with a quilt of valor. In keeping with his personality, “He just simply said, ‘Thank you.’ No big speech or anything. He was a genuine guy, not a bragger or anything like that,” remembered Weldon.

Meanwhile, Jones-Hook is working with the University of Washington, the Washington State Heritage Caucus and other partners on a proposal to secure the the 25th Infantry band building at Fort Lawton as the new site for the Buffalo Soldiers Museum. Vacant for more than 50 years, the building was where Black soldiers stayed during segregation.

“Our mission is to educate, preserve and present American history,” Jones-Hook said. “And I think Clyde’s involvement with the [Buffalo Soldiers] was very much a proponent for the education of this history, and the service and the contributions that these men made.”

Robinson is survived by two sisters.

A public viewing will be 11:30 a.m.-3 p.m. Wednesday at the Columbia Funeral Home in Seattle.

Mark Van Streefkerk is a Seattle-based freelance writer and journalist. He loves to cover local news, arts and LGBTQIA+ topics. He can be reached on Twitter at @VanStreefkerk.
The Seattle Times closes comments on particularly sensitive stories. If you would like to share your thoughts or experiences in relation to this story, please email the reporter or submit a letter to be considered for publication in our Opinion section. You can read more about our community policies here.
Advertising