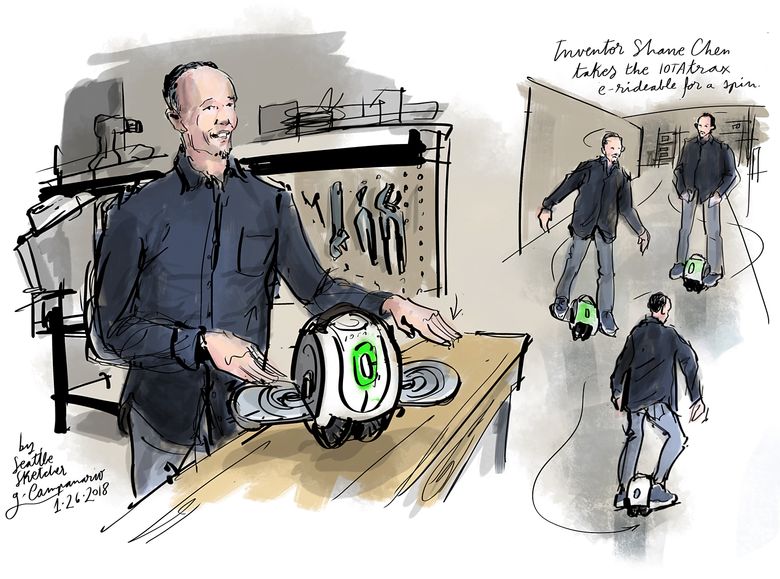 Shane Chen, the inventor of the compact, seatless self-balancing unicycle, demonstrates his latest e-rideable in his Camas workshop.

The craziest inventions can start with simple ideas. “What if I put a wheel between my legs, like a skate in in-line skating?” That’s how Shane Chen described the genesis of the Solowheel, the seatless self-balancing electric unicycle.

The craziest inventions can start with simple ideas.

“What if I put a wheel between my legs, like a skate in in-line skating?”

That’s how Shane Chen described the genesis of the Solowheel, the seatless self-balancing electric unicycle. He knew from his experience as a skater that you can glide on one foot. An electric-powered wheel, with no seat attachment whatsoever, could then be controlled by simply twisting your feet.

“I tried it right away and it worked. I amazed myself,” Chen said.

Turns out all those seatless electric unicycles and hoverboards people are riding in Seattle and other cities across the globe aren’t the product of some Silicon Valley startup as I had imagined. They are the brainchild of this sports-loving inventor based in Camas, Clark County.

Chen, an agricultural meteorologist turned full-time inventor who emigrated from China in the mid-1980s, has patented and licensed many fun contraptions over the years. Ever heard of the AquaSkipper or the Orbitwheels?

Since creating the Solowheel back in 2011, Chen is shaping a new era of personal transporters that are more practical and easier to use than those bulky Segways.

During a recent visit to his workshop in Camas, I had the opportunity to see and try his latest gizmo, a device named IOTAtrax that made a really good impression at the latest Consumer Electronics Show in Las Vegas. It consists of two parallel wheels tucked into a compact box the size of a six pack. The foot wings fold up, and a handle makes it easy to carry. It weighs 15 pounds, 10 less than the Solowheel.

Chen, a 61-year-old who stands 6 feet tall and prides himself on being a speedskater, windsurfer and snowboarder, may have been exaggerating a bit when he said it would only take me two minutes to learn how to ride the machine. I struggled to get my balance at first, and the foot-twisting moves necessary to make turns were no picnic. But it wasn’t as challenging as I had anticipated. Just watch this 1-minute video to compare my clumsy try to Chen’s artful riding.

I’m not alone among the skeptics who say they’d rather walk than jump on one of these machines. But Chen makes a good point about that. E-rideables offer an environmentally friendly option to help so-called last-mile commuters. “You ride a Solowheel from your house to the bus, and from the bus to work. … I don’t want to replace your walking,” he said. “I want to replace your driving.”