There’s a well-known Japanese saying, “the nail that sticks out gets hammered down.”

Meaning, don’t rock the boat or make waves, or you will pay a price. But last week, my family joined hundreds of Japanese Americans and others to stand up and stick out at the Northwest Detention Center in Tacoma, a jail for immigrants.

On a wet, blustery Sunday, Feb. 23, national organization Tsuru for Solidarity organized a “Day of Remembrance, Day of Action” at the detention center to commemorate the 78th anniversary of the presidential order to incarcerate 120,000 people of Japanese descent. Speakers drew parallels between the injustice of the past and the current immigration detention and deportation system.

“Tsuru,” meaning crane in Japanese, are symbols of peace and compassion. 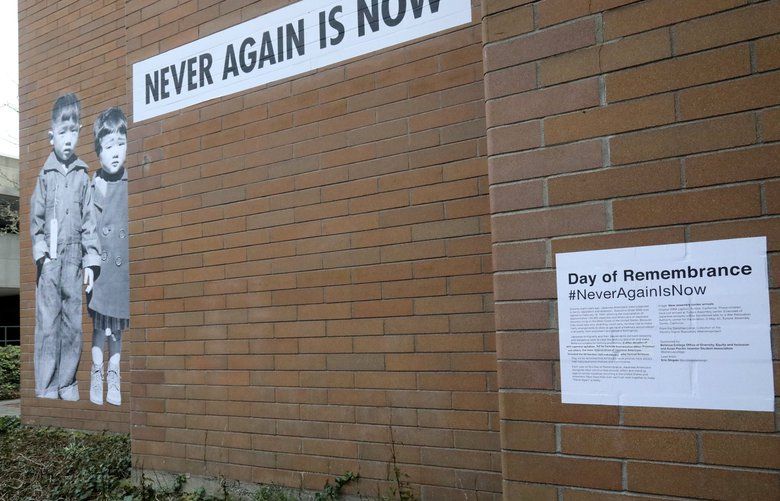 The event was one of the national project’s first big actions and was in solidarity with local immigrant-rights organization La Resistencia, and in partnership with Japanese-American history organization Densho and the Seattle Japanese American Citizens League (JACL). Supporters folded hundreds of paper cranes and hung them outside the facility in solidarity with the people inside.

Under the banner “Never Again is Now,” Japanese American activists want to make sure the silence and complicity of friends and the larger society that our community faced in 1942 is not repeated today. They join other communities who have faced persecution, like Jewish activists who protested ICE last year in Seattle, in standing shoulder to shoulder with immigrants targeted now.

Tsuru for Solidarity Seattle steering committee member Barbara Yasui’s family was one of the thousands deeply affected by the Japanese American incarceration.

Her grandfather, Masuo Yasui, a business and community leader in Hood River, Oregon, was arrested five days after Pearl Harbor and separated from his family for four years. Barbara Yasui said her grandfather’s feeling of betrayal by the community he thought valued him and he could trust, plus the years of detention, ultimately led to mental trauma that culminated in his suicide in 1957. Barbara Yasui’s father, Homer Yasui, 95, who also attended the Tacoma protest, was sent to the Tule Lake incarceration camp in California; her mother, Miyuki Yabe Yasui, was incarcerated at Heart Mountain, Wyoming. Her uncle Minoru Yasui’s defiance and test of a curfew law for Japanese Americans in 1943 became one of four U.S. Supreme Court challenges to the legality of the imprisonment.

While it has taken a long time for some Japanese Americans to feel comfortable talking about that period of history, Barbara Yasui said we must speak up. “I have seen firsthand what that has done to my family. The harm, the trauma that that’s created for my family, and I don’t want to see that happen to anybody else.”

Readers of this column know my own family’s history of detention during World War II.

There are parallels today to the “racial prejudice, wartime hysteria and a lack of political leadership” that the 1988 redress decision for Japanese Americans identified as creating the climate that led to incarceration, Yasui said. While we are not at war, the rhetoric is similar.

“There’s certainly racial prejudice [toward Latino communities]. I think that’s pretty obvious that that is there,” she said. “There’s definitely this whole kind of hysteria around protecting our borders and not allowing these ‘hordes’ of immigrants from coming in.”

And the lack of political leadership is not just coming from a president who calls Mexican immigrants drug dealers and rapists, but from politicians who remain silent and refuse to stand up to him.

Tacoma’s Northwest Detention Center, recently rebranded as the Northwest ICE Processing Center, exemplifies the system Tsuru for Solidarity is fighting against. A privately run facility owned by GEO Group, the center houses up to 1,575 immigrants at a time. The facility has been rife with controversy, with hunger strikes over inadequate and poor quality food and protests over a “voluntary” work program that pays detainees $1 a day. One hunger striker died by suicide last year. As part of the “crimmigration” system I wrote about in December, this practice of incarcerating immigrants is a relatively new phenomenon.

The Tacoma protest is just the beginning for Tsuru for Solidarity. In addition to actions across the country, the group is planning what is expected to be the largest gathering of Japanese Americans since World War II with a protest at the U.S. Capitol for immigrant rights on June 5. Organizers plan to bring over 120,000 paper tsuru with them to display at the event as well as meet with members of Congress to lobby for policy changes.

It’s not easy to be the nail that sticks out. But many still do, knowing that as the Rev. Martin Luther King Jr. reminds us, “In the end, we will remember not the words of our enemies, but the silence of our friends.”

Correction: This story was corrected on March 3, 2020. In an earlier version, Yuuna Tajiri’s first name was misspelled in a photo caption.