Two decades ago, Washington became a foothold for a global movement to decarbonize buildings.

But since then momentum has sputtered.

The state has access to some of the cleanest and cheapest electricity in the country and yet its building codes remain strict, customers remain skeptical of upfront costs and state policy efforts have struggled to find traction.

Homes, offices and other buildings account for a large portion of worldwide greenhouse gas emissions. While local and state efforts to boost interest and investment have seen mixed results, a recent merger between an environmentally innovative Bainbridge Island firm and the world’s second-largest architectural firm offers hope.

Jason McLennan put his firm McLennan Design on the map when he created the Living Building Challenge, a green building certification that influenced and inspired architects, developers and lawmakers around the world. He was also heavily involved in the design of Climate Pledge Arena, among other iconic buildings in and around Seattle. In July, his practice merged with Perkins & Will, an architecture and design firm based in Chicago.

“We’re doing this at a point in time in the world where the urgency around designing higher performance, environmentally responsible buildings is becoming that much more necessary” said Phil Harrison, CEO of Perkins & Will. “It’s one thing to do a couple green projects from time to time, it’s something else to try to have major large-scale impact.”

The two firms were already collaborating on the design of Western Washington University’s forthcoming Kaiser Borsari Hall. Both said the merger will help them involve more interested parties and pioneer new methods as they pursue more ambitious projects.

“We have all those pieces in place but we haven’t catalyzed this movement in a way that is truly effective,” said McLennan, who is now Perkins & Will’s inaugural chief sustainability officer. “The opportunity with this position is to say, well, how can we do even more?”

McLennan’s Living Building Challenge was used in the creation of the Bullitt Center, which is lauded as the greenest commercial building in the country. Designed by architectural firm Miller Hull, the gleaming, six-story structure situated atop Seattle’s Capitol Hill neighborhood since it was finished in 2013 is equipped with all the gadgets and adornments of the prototypical building of the future: 575 solar panels, gaping skylights to reduce the need for indoor lighting, heat pumps, a bicycle-only parking lot and a rainwater capture system connected to a 56,000 gallon underground cistern. 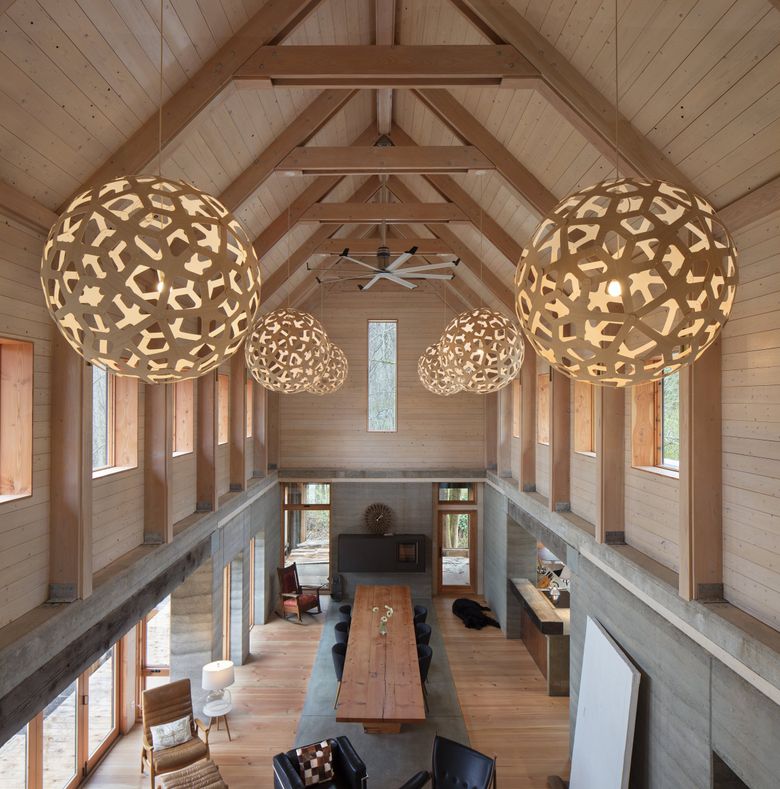 Automatic windows and exterior shades tied to a weather monitor on top of a building across the street keep the building naturally cool during the warmer parts of the year. The interior is kept warm for the cooler parts of the year by a radiant system that uses heated water circulated through tubes in the floors.

The building was designed to withstand a magnitude-9 earthquake, has its own independent water system, and even has the ability to go off the grid with the help of a few batteries should electricity fail.

Developers have always been fixated on preventing the environmental harms of a building, but McLennan helped change the narrative, said Bullitt Center spokesperson Brad Kahn. He focuses on the potential positive effects a building can have.

“What Jason brought to this discussion was flipping the script,” Kahn said.

Residential, commercial and industrial buildings account for more than one-third of greenhouse gas emissions in Seattle, nearly a quarter in Washington and around 40% worldwide.

“We need to find a new way of designing and building and operating the places that we spend 90% of our time,” Kahn said. “What we’ve shown is that, even in Seattle, we can run a building entirely off of solar energy.”

In Washington, public officials are looking to eliminate or reduce the carbon footprint of our built environment primarily through forms of financial assistance. But that approach has its limits.

On Friday, King County announced it would use federal grants to help homeowners trade oil furnaces for heat pumps, a move that can lower emissions and energy use.

As summer temperatures climb, and heat waves and drought grow both in frequency and intensity, Washington remains ill-equipped for the coming heat.

Seattle has a smaller share of households with air conditioning units than almost any city in the United States. While the number of users has grown over the past decade, progress is slow.

Earlier this year, a slew of bills targeting outdated building codes, energy use in commercial offices and the high costs of heat pumps, among other things, all failed to make it through the state Legislature.

While the upfront cost of heat pumps or green homes can be higher, the long-term dividends are far greater, Duerr said, especially with rising energy costs. But the trickiest challenge lies in reducing the carbon dioxide emissions of existing buildings.

“The greenest building is the one that’s already been built,” she said. “It’s a matter of getting those upgraded and retrofitted.”

Square footage, upfront costs and initial energy expenditure have traditionally been the primary concerns of anybody looking to buy or build a home, office or commercial facility. But the industry is adjusting its calculus.

Experts often refer to the difference between operational costs and embodied carbon. The former refers to the greenhouse gases emitted by a finished building. Embodied carbon is more comprehensive, as it examines the emissions produced by the process of construction itself.

Embodied carbon is still an emerging field. Since the U.S. Department of Energy began collecting and cataloguing data on building energy use, carbon emissions have slowly but surely become a bigger part of the equation.

Now, developers are taking increased account of how a building is made, what materials are used and from where they’re sourced, and the long-term benefits of electric appliances, heat pumps, passive temperature control and natural lighting.

“You end up with a building that has a much richer experience and uses less energy,” said Chris Meek, director of the University of Washington’s Center for Integrated Design.

In 2009, the City of Seattle created the Living Building Pilot Program, which was inspired by McLennan’s Living Building Challenge and provides developers with benefits and tax incentives to create buildings that are sustainably constructed.

The program’s director, Jess Harris, said the focus on embodied carbon, while encouraging, is still growing. Expanding tax credits to further incentivize emission reductions in the private sector will be difficult, he said, namely because it’s almost all been done already, pointing to tax incentives that aim to reduce operational costs.

Embodied carbon and the retrofitting of existing buildings are a much tougher nut to crack. “There’s a lot of scrambling going on to address that,” Harris said.

In that respect, the law could play an indispensable role.

Washington is legally required to eliminate or offset all carbon emissions by 2050.

The state Clean Buildings Act, which was signed into law in 2019 then expanded earlier this year, aims to reduce the costs and emissions of existing buildings in Washington by holding developers and commercial building owners to an energy performance standard.

The law applies to nonresidential buildings, hotels, motels and dormitories with more than 50,000 total square feet, excluding space for parking. Multifamily residential buildings five stories high or taller are exempt from most of the requirements other buildings face, but became eligible for one of its incentive programs earlier this year.

Compliance with the program will be required gradually beginning in 2026.

“Right now our buildings are driven by an economic model that is, first of all, short term and it doesn’t care one iota about energy use,” said UW architecture professor Robert Peña. “We need to find market incentives that make doing the right thing also the most financially palatable.”