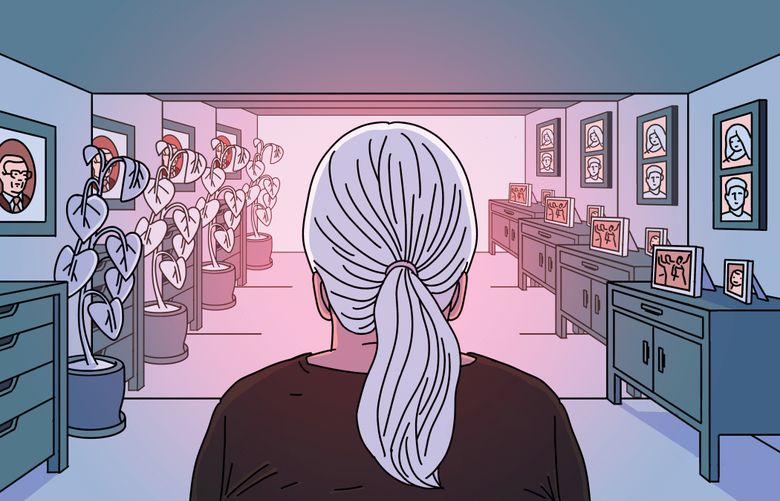 Kay, 81, didn’t hug anyone for months. Richard, 67, started drinking heavily, ending six years of sobriety. Kathy, 82, would read news stories out loud — then remember no one was around to listen.

For more than a year, the Seattle-area older adults had their own worlds shrink as the world outside their homes descended into virus-stricken chaos. Told to shelter in place to slow the spread of COVID-19, they grappled with loneliness, a pain that permeates even as society reopens and the general population might consider themselves nearing a post-pandemic environment.

“You feel it in your bones,” said Richard, who lives in Snohomish County and, like others interviewed for this story, didn’t want his last name used because of what he considers a stigma surrounding feeling lonely. “It’s an enveloping depression, because you are alone. The loneliness, it’s like a dark night without any stars or the moon.”

The effects of social isolation during the pandemic have hit all ages — some studies, for example, show teens have fared worse than other groups — but older adults already were a population vulnerable to loneliness. And for many, the pandemic was the first time they felt deep, sustained loneliness. It’s a feeling that can impact physical health, creating greater risk for some illnesses and hospitalizations; and mental health, potentially exacerbating symptoms of or leading to clinical disorders such as depression.

In a survey conducted to look at these impacts, a third of those aged 50 and older reported going a month or more without interacting with another person. Almost half noted a lack of motivation. Lower-income older adults and women were more likely to mention social isolation or loneliness, according to the report by the AARP Foundation and the United Health Foundation.

The effects of more than a year of loneliness, experts say, could be long-term.

“It’s a huge issue, and had been a huge issue, prior to the pandemic,” said Bea Rector of the state’s Aging and Long-Term Support Administration, which is part of a state group looking at how to mitigate the impact of social isolation on older adults.

Loneliness is part of the human experience. Though associated with social isolation, the two aren’t the same, according to Louise Hawkley, a principal research scientist with the organization NORC at the University of Chicago, who studies loneliness and social isolation. Isolation is objective, defined by low levels of contact, and can be enjoyable if chosen, like someone who wants solitude.

Loneliness, meanwhile, is subjective and doesn’t necessarily mean you’re alone. It’s possible to feel lonely even in a room full of people.

Loneliness, Hawkley said, is the distressing feeling that accompanies a sense that one has a mismatch of what one has, and what one wants out of relationships. It’s a social pain, and if ignored, can create a loop difficult to get out of. It is not, Hawkley added, a normal part of the aging process.

“It’s a sign that older adults need to heed: that it is not their fate,” she said.

Throughout the past year and a half, and increasingly as the delta variant adds to the rising case numbers, older adults have had to weigh feeling lonely versus feeling safe.

Lalita Uppala, executive director of Bellevue-based Indian American Community Services, heard from one senior who, without a companion or children who live with her, felt her world was quiet. The silence, she told Uppala, was like someone scratching on a chalkboard, and she closed her ears because of the silence. She wanted to go to a grocery store for the sake of listening to the bustling sound there, but she was terrified to go anywhere, because of the virus.

Older adults, in particular, are more likely to be in an environment that can lead to loneliness. They’re more likely to have lost a spouse or friends, and, if they lost a loved one during the pandemic, to have few options like funerals or support from family members to process their grief. Richard’s wife of 38 years died in December 2020 of a non-COVID illness. For the first time in nearly four decades, he was alone in his house. He doesn’t have a lot of friends. His godson lives in another county.

“I have a 15-year-old kitty, and he sensed it,” Richard said. “We snuggled together and I talk to him, and he was someone who I could at least have some affection from. If I hadn’t had that affection, I don’t know what I would have done.”

He’s closer to “back to my old self” now — he spoke of excitement over seeing a few friends for a Friday dinner, after one friend got his second shot. He works from home, which also helps as a distraction. But when work ends, he’s alone in his house, surrounded by pictures of friends and family who have passed.

“It just makes the loneliness tangible,” he said. “It’s a tangible sense, like seeing, smelling, touch. It becomes another sense that overpowers you.”

There’s a connection between grieving and loneliness, and a loss of friends, networks and family connections, said LouAnn Ballew, a volunteer co-chair of the Redmond Senior Advisory Committee.

It can be difficult, Ballew said, to reach those who are lonely. She’ll be talking with someone who seems curt or more tense than they used to be, then learn they haven’t spoken with anyone else in a few days. They have been so in their head, she said, they have trouble reintegrating. She’ll tell them about services for seniors but they’ll say no.

A lonely person may feel helpless, then become more likely to see things in a negative light and believe others are rejecting them. It becomes a self-fulfilling prophecy, Hawkley said: It’s likely more people will behave negatively toward them, worsening the loneliness.

Resources if you need help

Friendship Line: A 24-hour toll-free crisis line provided by the Institute on Aging for people 60 and older, and adults who have disabilities. Friendship Line is also a “warm line” for emotional support and regular call check-ins. Phone: 800-971-0016

Sound Generations: A nonprofit that operates programs for food security, transportation, health and wellness and other assistance services for older adults and people with disabilities in King County. Phone: 206-448-5757 Email: info@soundgenerations.org

King County Caregiver Support Network: The support program provides resources for those who provide unpaid care for an older adult in King County or an adult living with a disability. Phone: 844-348-5464 (KING)

Veterans Crisis Line: A crisis line for veterans of any age to reach responders with the Department of Veterans Affairs. Phone: 800-273-8255 or send a text message to 838255

Concerns about loneliness go beyond mental health. Loneliness can be associated with poor physical health, according to health experts, including heart attack or stroke. Among heart failure patients, those who reported loneliness had a four-times increased risk of death, a 68% higher risk for hospitalizations and 57% higher risk of visits to emergency rooms compared to their counterparts, according to the Centers for Disease Control and Prevention.

In her research, geriatrician Dr. Carla Perissinotto found that experiencing loneliness, on its own, also puts someone at an increased risk of losing their independence, as measured by whether they could complete activities of daily living.

Before the pandemic, Meals on Wheels Kitsap drivers and volunteers connected with seniors every day, providing hot meals and socialization for isolated and homebound seniors. The organization had to change to frozen meals, delivered far less frequently and with far less face time among seniors and volunteers.

Last year, Meals on Wheels Kitsap served meals to more than 3,000 seniors. They had to think creatively about how to connect with clients beyond meal services, said executive director Deborah Horn, like a telephone check-in service. About 20 volunteers make around 250 calls per month to seniors, whose average age is 62, according to Horn. Volunteers log in about 4,000 minutes of call time each month — some seniors are talkative and others just want to say hello.

“They know that Mary has two kids and five grandchildren, and the volunteer may ask ‘well Mary, how is John doing? Did you get a chance to see your grandkids?’ and so forth,” Horn said.

They also ask how the senior is doing and what if they need anything. One client, who uses a wheelchair, couldn’t reach his clock after Daylight Saving Time to change the time and battery.

“They ask how their days have been, how their weeks have gone, the food they are getting, what they didn’t like, it’s all over the board,” Horn said. “And the volunteer who delivered his meal was able to change his battery.”

Some previous research on loneliness found that a significant group of those who felt lonely were actually living with others. Nanda Tewari, senior services coordinator for Indian American Community Services, worried about the organization’s more than 1,000 seniors who lived in multigenerational households but felt isolated, especially as COVID devastated India. Every senior, Tewari and Uppala said, has lost a family member or friend in India.

The organization hosted culturally nuanced virtual programs, like chai and chat, where seniors can drink tea and listen to a presentations, play games or talk about their lives. For Jyoti Joshi, 72, the virtual sessions were a lifeline when she felt bored at home while her family members were focused on their own online work. She and her husband, 75, who immigrated from Mumbai, also enjoy chair yoga and days when everyone wears traditional dress to celebrate festivals.

“We are very thankful,” Joshi said. “Our loneliness is no more now, from attending these programs.”

Technology can help fill a void in connection, but it’s not a substitute for touch, and doesn’t always take, depending on the person’s preferences and familiarity with the different systems, like Zoom or FaceTime.

Kay, who lives in South King County, used to take online exercise classes, but found she didn’t enjoy it as much as her in-person sessions. Her neighbors were careful to restrict their visits, and she missed hugs, simple touches and rituals like going to church. She would talk to her plants, “anything that moved” to make sure her voice was still working.

“Reflecting on those feelings when it (the pandemic) was most restrictive, it really did impact me in a way that I wasn’t used to,” she said. “I hope I don’t have to go through that again.”

Just as the pandemic has extended longer than most people expected, so too will recovery, and a journey from social distancing and loneliness, said Rector, of the state group looking at social isolation. Methods that worked during the pandemic, like telephone check-ins, can be longer-term solutions rather than just pandemic-related solutions.

Funding remains uncertain, she added. Perissinotto noted that far less money goes toward addressing loneliness than other public health concerns, even as the risks are comparable.

There’s also an “inherent discomfort” in talking about loneliness, but Perissinotto said she’s found that people do want to speak about their experience. During one study, a majority of the participants found a great benefit simply from the research team contacting them.

“There’s an inherent value in people just reaching out and talking about this,” she said, “and reducing stigma.”

After she was fully vaccinated, the senior who had once told Uppala she was scared to go to the grocery store joined some others for a picnic in a park. In the middle of the picnic, she broke out into a dance.

“And all the seniors followed her,” Uppala said. “Singing together and dancing.”